9-1-1 returns with a new member of Bobby’s team, Buck’s sister, and Athena struggling to accept love in her life.

Table of Contents show
1 The New Guy In Town: Eddie, Hen, Buck, Chimney
1.1 Commentary
2 Let Me Love You: Athena, Bobby, Michael
2.1 Commentary
3 Why The Visit Sis?: Maddie, Buck
3.1 Commentary
4 Highlights
5 On The Fence
6 Follow Wherever I Look on Twitter, Like us on Facebook and Subscribe to the YouTube Channel.
6.1 Check Out Other TV Recaps

A veteran comes to the station and with him paying his dues fighting a war, Buck feels a certain type of way about him not being put through the gauntlet. Especially since he is more built than him and even catches Hen’s eye a little bit. The big to do though is an upcoming calendar in which all the men want to be in but only one per station get chosen. But, while it seems to be an ego thing for Buck and Eddie, for Chimney it is about representation. After all, the depiction of Asian males, especially those without Hollywood physiques, don’t get seen as heroes who look like Chimney. Heck, they don’t look like Hen either.

However, after Eddie and Buck makeup, handle grenades and seem intense in their competition, Eddie just plain ole taps out. Luckily for him, however, Hen doesn’t so he ends up Mr. April.

It’s easy to forget, with the way Hollywood is, representation goes beyond seeing actors who look like you. It is also everyday stuff like emergency personnel, teachers, business owners, politicians, and etc. For as much as the media can make something seem real, as shown by Chimney’s issues, they can also reinforce the idea that you have limitations. If not should have limitations on your dreams.

Athena is not the easiest person to make happy. Not because she is hard to please but she is so hard on herself that it seems if things aren’t 100% her way, there is a problem. Especially in her personal life since she has so much power in her professional. Case in point, she and Bobby have issues since Bobby, after 4 months of dating, wants them to be more public. Athena, on the other hand, wants to keep things on the DL because she is ashamed of being happy.

Why? Well, stigma. Between being the first in her family to get a divorce and the stereotype of how a Black woman can’t keep a man? That pressure weighs on her and takes the fun out of dating Bobby. However, with Michael encouraging her to love and open up, live fearless, she decides to walk into the first station and kiss Bobby on the lips. Outing their relationship to his crew. 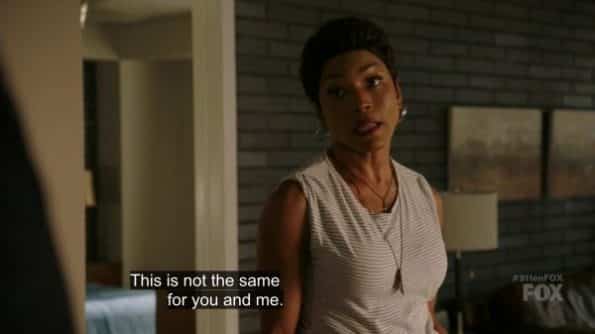 Athena: This is not the same for you and me.

At first, I didn’t get the need for secrecy, but let’s take note of what Athena said. With her being a certain age, it means she comes from a culture unlike what is accepted a lot in modern times. Athena wasn’t raised with divorce being a viable option. So imagine her being her age and dating? Taking this man, who seemingly knows nothing of where she came from, around.

Which she says isn’t a Black/ white thing, but it very well may be. It is just Bobby is too new to approach that conversation. But one conversation which surely will be interesting is when Bobby gets triggered while watching Michael and Athena interact with their kids. For while, I think, Bobby’s kids would be the same age or older than Athena’s, you know that is going to stir something up in him. So this bump in the road? Expect it to be the first of many.

Why The Visit Sis?: Maddie, Buck

Despite how close they were as kids, Buck and his older sister Maddie haven’t seen each other, or communicated much, in over 3 years. She lives her life in PA and he was out in LA. However, thanks to some really terrible security, she got into his place, Abby’s actually, and decided taking a shower would be a good idea. You know, because LA doesn’t have crazy people who break in and do that kind of stuff. Though, let’s not leave Buck off the hook here. He hears a shower running and gets naked.

Seeing your sibling naked, as an adult, aside, we learn Maddie is in an abusive relationship. One which has been a red flag for her family since she was dating Doug in high school, but has really gotten bad over the last year. I’m talking death threats. Luckily, Doug doesn’t know much about Buck’s life so Maddie is safe. Add in Buck having a connect to get Maddie a 911 operator job and she seems ready to rebuild her life. 911 is the type of show which can be very extra. Take note of Athena’s daughter attempting suicide last season and how that was handled. So how it may handle this Maddie and Doug situation will show if it has matured or uses the same sensationalism in the 911 calls as it does characters’ personal lives. For despite, as @theCarrieNugent pointed out, the whole cement in microwave thing being real, that can be taken lightly and made a joke out of – which the show does. Maddie dealing with abuse? I don’t think that is something you can surround with odd 911 calls, awkward moments between the team, and not make stick out like a sore thumb.

I mean, again, taking note of Athena’s life in general, Bobby’s to a point too, when there is a good rhythm with their stories, it makes these two stick out and seem like they belong in a drama. Bobby’s story especially with him talking about suicide after saving enough people. So perhaps the real question should be, between how Bobby’s past was handled and Athena’s daughter nearly killing herself, which way may this show go?