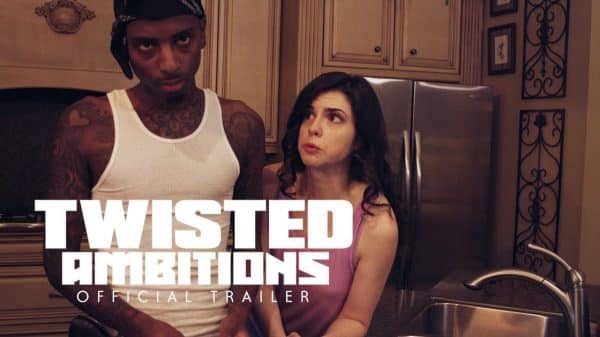 Twisted Ambitions reminds you a college education doesn’t keep you from being an idiot or manipulated.

At yet another party, similar to the last, just at a different place, Lip’s refusal to say he loves his girlfriend, Katie, leads to a shocking reveal that causes Lip to go into a downward spiral. One which deals with drug dealers, killers, gossips, and some whose reputations are less than stellar. But, after coke, alcohol, and who knows what else, Lip isn’t right in the mind and it leaves him especially vulnerable to bad influences.

It Leaves You Wondering How Far Will This Go?

A lot is going on in Twisted Ambitions, and whenever you have people a little off their rocker in indie movies, sometimes you find yourself going from a basic college party to something of the occult. Luckily, the film doesn’t take things that far but does push the need to ask how capable are these people of going beyond partying and bull****?

Lip, for example, gets his heartbroken and goes on a bender, but is this dude we see get a black eye really capable of trying to kill someone over his embarrassment? What about Beth? Someone who finds herself attracted to Lip, who is often called crazy, but is she really or just misunderstood? Partly since she has a Black brother and her upbringing seems a tad unorthodox?

Also, considering said brother, named Tow Truck, has this weird older dude who hangs around him, there is this need to wonder as we hear about drug dealing, see huge guns being touted about, and a bunch of dumb young adults, how will it end? Because a blood bath never seems off the table.

The vibe the film will give aside, the drama is a mix of being comical and you needing to do a graceful side-eye. In terms of the comedic bit, it is purely because of Vicky who knows all the tea and only spills it when she seems to know it would scald the worst. Making for multiple hilarious moments as people look at her, asking why she didn’t do anything, and her talking about she didn’t want to be involved in someone’s drama – despite, in the long run, finding herself part of the story anyway.

But then, as for the real drama? Look no further than Beth. Someone who you feel something for since, even without her full back story, you can sense something is wrong and that Beth has long been searching for a secure connection. One unlike with her brother Tow Truck, and her ex, which is tainted with violence, drugs, abuse, or maltreatment. This makes her attachment to Lip unfortunate since she falls in love with his vulnerability, and she walks in, and stays, knowing she will never be his first choice.

Which, mind you, isn’t something presented so strongly you will get in your emotions, but the writing pushes you to really consider all of Beth’s actions and paint this sad picture.

Noting this is an indie film, yes. The acting does come off a little weird at times, but for many this is their first feature film, and for writer/ director Raheem Allen, this is the first production he wrote and directed. So while some of the effects may not be top-notch, in terms of an indie film, considering how many locations there were, number of actors used, and you getting a feel of what everyone’s place is in the friend group, you have to respect the ultimate product.

I’d watch more of Allen’s work, for sure, but as for watching this again? Honestly, it is a one and done kind of film.

Twisted Ambitions is for true indie film lovers who enjoy watching a person’s early work before they have the budget, A-list talent at their beck and call, and a team behind them that polishes everything to the point the only indie thing about it is how few theaters it is in. For if it isn’t the curious path Allen weaves, as he leads you to question what his cast is capable of, or characters who might be unintentionally funny, this is definitely a fun to watch first feature.

It Leaves You Wondering How Far Will This Go? - 85%