Wherever I Look
Recaps, Reviews, and So Much More
Home Movies Tomb Raider – Review (with Spoilers)
Movies

While you have to appreciate Vikander’s take on the legendary video game heroine, it completely misses the mark on what made Lara Croft a mainstay of her industry.

Table of Contents show
1 Summary
1.1 Other Noteworthy Facts & Moments
2 Highlights
2.1 It Brings a More Dramatic Tone To The Series
3 On The Fence
3.1 It’s Better Than The Average Video Game Adaptation, But The Bar Was Set Low
4 Overall: Mixed (Divisive)
5 Follow Wherever I Look on Twitter or Like us on Facebook.

7 years since her father’s disappearance and Lara still refuses to believe he is dead. She also refuses to accept a penny of her inheritance and instead masquerades as a poor bike courier. That is, until she gets arrested trying to make some money (legally). But, with being bailed out by her father’s assistant, Ana, so comes the need to perhaps get real. Leading to her beginning the process of signing things into her name until Mr. Yaffe, another one of Lara’s father’s associates, presents to her a Japanese puzzle. With her solving it, it brings her to another puzzle and, eventually, she finds herself in her father’s secret room, in the family mausoleum.

There she learns about a queen named Himiko that was the supposed goddess of death and how, to perhaps become closer to Lara long-gone mother, her father, Richard, decided to dedicate his life to discovering Himiko. Yet, with a video meant to push her away and erase his final project, he only brings her to pick up where he left off. Thus inspiring her to go to Hong Kong and look up Lu Ren. Originally the senior, but it seems that is the man Richard went on his expedition with. Luckily, though a drunk, the junior finds himself quite useful.

However, of how much use can he be on the island ran by Mathias Vogel, an arm of Trinity? Well, I won’t say. Just know that, like its video game counterpart, you have to suspend your disbelief to believe what these two try to survive.

It Brings a More Dramatic Tone To The Series 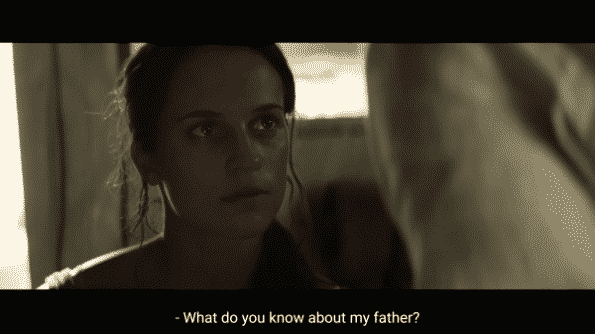 Naturally, Vikander is no Jolie

. There isn’t a devious charm about her or even much of a sense of adventure. She comes off more as what Lara essentially is: A bored rich girl with the resources to afford to go on adventures. With that comes a different tone to the series. There is some sprinkle of being a bad ass, as our introduction has Lara getting her behind whooped in a boxing ring, but this is not where Vikander shines. Though the stunts are interesting, with knowing green screen, amongst other modern technical marvels, were used, it lessens what should be thrilling jumps and suspenseful moments.

Bringing to what Vikander tries to do to make Lara her own – bring her dramatic chops. This is done primarily in the form of relying on Lara’s relationship with her father. Giving you perhaps some of the best acting you’ve seen in a video game adaptation.

It’s Better Than The Average Video Game Adaptation, But The Bar Was Set Low

With that said, Vikander trying to turn one of the biggest action heroines into a more nuanced and dramatic role largely takes the fun out of the movie. Especially since the relationship between Lara and her father is more built up in flashbacks then it is seeing the chemistry between Vikander and West. On top of that, what we get with this movie is a very basic, two-bit villain. Goggins, while an interesting actor, isn’t given any sort of layers in his character Mathias. He is basically a stooge for Trinity, who we learn little to nothing about, who has been fighting with them, and the ghost of Richard, for 7 years. All so that he can get off that godforsaken island. And honestly, as much as he may kill in cold blood, it doesn’t push you to react. He doesn’t seem like a bad ass for killing people who are middle age and frail. He just seems like an expendable punk. 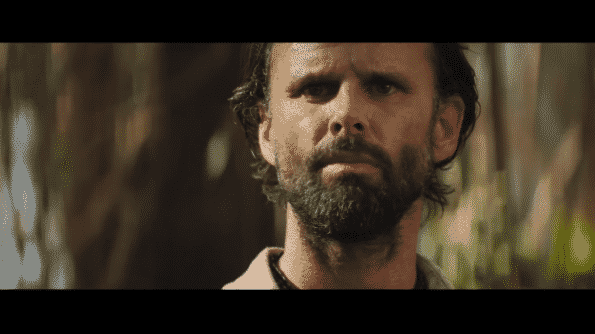 Mathias looking into the distance. Being strangely well groomed for someone stuck on a island for 7 years.

And as for the overall story? While it could work for a video game, because then you’d be interacting with what is going on, as a movie? It’ll make you wish this was 90 minutes or less. For as you care less and less about Lara’s relationship with her father, as Mathias proves he is a very disposable villain, and nothing in the story compensates for the aforementioned, you’ll be checking your phone for the estimated time this movie should be over.

While you have to give Vikander props for taking the lead role in what is a double reboot, I doubt she’ll find herself in a brand-new hit franchise. With her lacking the charm of a computer-generated Lara and the comparisons to Jolie’s version of Croft, she is unremarkable. With action scenes that scream, THIS IS ALL MADE FROM ADVANCED TECHNOLOGY, it takes away from the suspense of them all and then here is the real killer… Tomb Raider’s storyline is so basic and boring, it actually makes you nostalgic for Resident Evil

, and even some of its sequels. 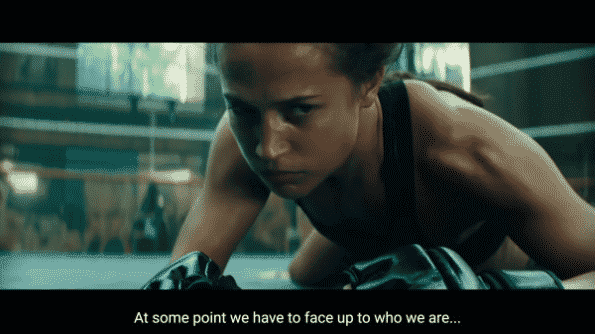 Hence the mixed label. Vikander and the writers didn’t necessarily make a bad movie, but for one of the legendary characters of video game history, it is a disappointment. Even when you take into consideration there aren’t too many video game adaptations that not only seem to understand the source material but the fans of said material as well.

I really enjoyed this game reboot and am kind of interested in seeing how it turned out in movie form. Hopefully it will be fun and hopefully I’ll get to see it if it is still in cinemas in a couple of weeks. If not I’ll have to wait until it streams somewhere.