Wherever I Look
Recaps, Reviews, and So Much More
Home Movies The Wife – Recap/ Review (with Spoilers)
Movies

The Wife – Recap/ Review (with Spoilers)

The Wife seems like an oddly placed summer film for it has all the workings to be Oscar bait – without coming off pretentious.

Since she took Joseph’s English class in 1958, Joan has had a very peculiar relationship with her future husband. She was the final straw in his first marriage and somehow, all the way to 1992, dealt with his multiple infidelities. Joan even had two children with the man. Perhaps pushing you to wonder, why did she stay? Well, the answer is given fairly early, “Everyone needs approval.”

For at one-time Joan wanted to be a writer, yet she would have had to deal with the sexism of the 50s and 60s in the literary world. A medium untouched, so it seems, by the sexual revolution the same way other platforms were. Yet, she never stopped writing, it was just under her husband’s name. So, fast forward to 1992, and Joseph is being awarded a noble prize, something which is originally a big deal until a young man named Nathaniel pokes holes in that joy, as well as Joseph and Joan’s son David. Leaving you to wonder, after nearly 30 years, will Joseph come clean, will Joan reveal the truth, maybe Nathaniel or David? Or will things remain a secret as they long have been? 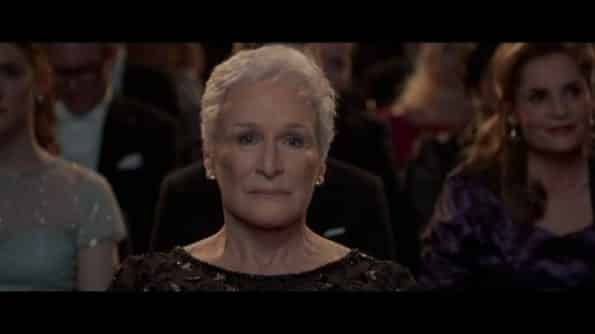 Similar to Philomena, the film relies on the past to build a foundation for what happens in the future, in The Wife’s case, 1992. In the past we see Joan become smitten with Joseph, confess falling in love with him to Joseph’s first child, and then the most important scene of the entire movie: When Joan met Elaine Mozell. With her negatively speaking about being a female writer, combined with Joan’s work at a publishing house, you begin to understand the relationship between Joan and Joseph. Why the comment she makes, “Everyone needs approval” has probably been one of the key reasons they have stayed together through multiple affairs, which luckily didn’t bore children.

That and Joan had stories to tell and needed a man to be her trojan horse. Hence the agreement to have Joseph’s name on her writing, when the most he may have done is edit her books. But, there comes a point where you can’t just be the smiling wife who enjoys hearing the praise. You want to be front and center, getting the pats on the back for more than being the wife who likely got neglected as one book after another was made. Really pushing, even though this story is fiction, how stories like Mary Shelley, about Frankenstein’s author, probably are more common than we know.

And it makes watching Joan see Joseph, for over 30 years, get this praise lead you to applaud Close’s handling of it. Especially as Joseph is up for a Noble prize. For in literature, there aren’t as many awards, then or now, like other forms of media. There is, off hand, just the Pulitzer and Noble Prize. Well, at least in terms of what would commonly be seen as their equivalent to an Oscar, Tony, or Emmy. So imagine a man, whose own work is trash, taking all the credit and thanking you as his wife. Maybe, with subtlety, having an inside joke of him knowing you really did all the work.

In those moments, be it fury or simple frustration, you can see Close’s eyes looking glassy as if she is about to cry. Which, for me, taking note the way the academy is, and they love first timers, and Lady Gaga is a big name, there is just so much control and experience in Close’s performance, that her winning would be such a glorious moment. Especially considering her daughter supported her character having so much impact. 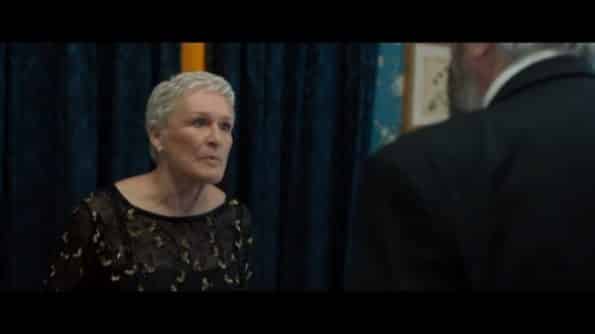 Joseph, as established by his younger and older self, has always been a piece of work. He damn near has an affair before the Noble ceremony which only gets stopped because his watch goes off. So, considering the ending is Joan being done, having a huge cathartic release, taking note of what happens after she blows up – it leaves you as frustrated as Joan has been for 30 years.

Purchase Ticket on Fandango Or Get The Book on Amazon

I’ll be so glad when the diversity initiative is about more than youthful people of color getting more screen time. Because, as with most movements, it seems more about the youth than anyone else. For, like with Close’s role in The Wilde Wedding, there are just some stories 20, 30, even 50-year-old ’s can’t play. And life doesn’t stop at 50. You need roles like Joan or Shirley MacLaine in The Last Word. For whether it is drama or comedy, animation even, there is still a life to be had, stories to be told, and the need for people out there to feel seen.

Hence the positive label. Close’s presence and work has really pushed the need to not make her one of the few women who can bounce around from small movies like Anesthesia and The Girl with All the Gifts, to big productions like Guardians of the Galaxy. There should be a huge amount. For whether Oscar worthy stories like this or productions like Sea Oak, which was a bit weird, there is an unexplored avenue and untapped audience. Which hopefully, in time, is changed.

Close’s presence and work has really pushed the need to not make her one of the few women who can bounce around from small movies like Anesthesia and The Girl with All the Gifts, to big productions like Guardians of the Galaxy. There should be a huge amount. For whether Oscar worthy stories like this or productions like Sea Oak, which was a bit weird, there is an unexplored avenue and untapped audience. Which hopefully, in time, is changed.