Wherever I Look
Recaps, Reviews, and So Much More
Home Movies The Last Shift – Review/Summary (with Spoilers)
MoviesPositive (Worth Seeing)Recommended (Movies)

The Last Shift – Review/Summary (with Spoilers)

The Last Shift taps into a quieter story, minus any grandstanding, to allow two characters to be challenged by one another and learn something despite their differences.

After 38 years, Stanley is prepping to retire and head to Florida to take care of his mother. But, being the company man he is, he wants to make sure things are right before he leaves. So when assigned to train Jevon, he hopes for the best considering Jevon is young and makes it clear bare minimum is his thing. Though in time, Jevon does pick up the slack and even becomes good company.

However, with Jevon poking and prodding at Stan’s life, bringing up his white privilege, and how he didn’t do anything when a Black guy was killed when Stan was in school, this creates some animosity. The kind that leads to Stan pushing back and nearly ruining Jevon’s life.

Many films focus on people of different races and cultures in conversation, especially not when in large groups, try to create teachable moments, kumbaya, and push racial harmony. If not outright chaos. With The Late Shift, Cohn doesn’t present the idea Stan or Jevon will experience a radical change due to a handful of conversations. Will they plant seeds? Yes. However, not Jack and the Giant Beanstalk type of seeds that exponentially grow overnight.

Yet, in you seeing Stan speaking of his life, and how that puts things in perspective for Jevon. Mind you, in a way that really pushes Jevon to get his life together, for making 13.50 an hour at past 50 would be a struggle, even if the cost of living isn’t the highest. Plus, Stan confirms, and Jevon’s ex validates, Jevon might not be a 9 to 5, going to college type. This means he is going to have to push through his insecurities, writers’ block, and move beyond what got him on probation and buckle down. Not just for himself, but for the sake of his son. Then, on the flip side, Stan lives in a bubble. He goes to work, sometimes hangs out with his best friend since middle or high school, Dale, and goes home. So while he may talk to kids, like Jevon, it is at the counter or drive-through window. There aren’t real conversations that challenge Stan or even allow Stan to provide more than customer service. And while Stan had co-workers before Jevon, it seems they shared a minimum amount of their lives.

Meanwhile, Jevon wants to bring up white privilege, challenge whether or not Stan should be happy with what he’s gotten after 38 years at the same place, and his role in a young man’s death. As you can imagine, this is jarring for Stan. Someone isn’t allowing him to operate on autopilot but rather is pushing him to take the wheel. And as both find themselves confronted with how the world outside their own sees them, you are reminded the value of real conversations not put through a filter of how creatives hope for things to one day be. If not, in an effort to expose how they are, go to extreme lengths to do so.

How, Despite What Jevon Has Gone Through, His Life Isn’t Dramatized

With Jevon being on probation, for things like vandalism and possible issues with authority, you could easily imagine him being someone angry at the world. This isn’t to say he doesn’t have a bit of a chip on his shoulder, but as shown through his conversations with Stan, it isn’t like he thinks the world is against him, nor in the movie does he have some dramatic monologue. Rather, what the film tries to capture is how Jevon is like many who made a mistake, ended up in the system, and now is trying to make the best of life thereafter. Which, of course, is a struggle with a record, a probation officer, and no decent-paying job trying to hire you. Yet, for yourself, your family, your future, you have to figure out a way to make it.

Not to be outdone, Stan is struggling too. He dropped out of high school and got stuck at a place that pays the bills but doesn’t offer much fulfillment. On top of that, while there 38 years, be it lack of drive or being passed over, he isn’t even the boss of the location he works at. Add on how well his brother is doing compared to him, his mom beginning to have memory issues, and you can understand why Stan likes things on autopilot. For if he really had to take account all in his life, which isn’t going as it should, he’d lose it!

We appreciate The Last Shift because it doesn’t care to sensationalize what any of the characters go through. There isn’t any effort to make them larger than life, have dramatic monologues, as if they are in a play, or convey them as anything but people who live in your community having their story told in a film. Each person, named or not named in this review, are simply trying to survive despite the challenges they took on or society gave them. 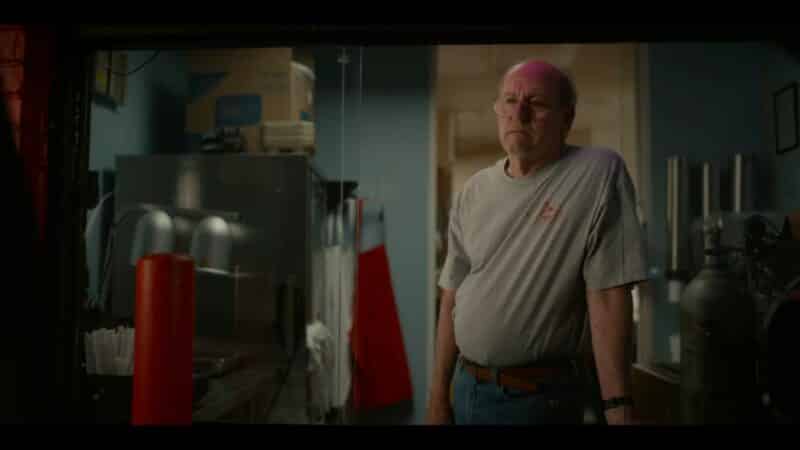 Hence the positive label. When most films don’t have the usual dramatization of everyday life, you’re reminded why most veer towards sensationalism. But with Cohn’s The Last Shift, you get the right balance of real-life drama with entertaining angles to keep you watching until the end.

How, Despite What Jevon Has Gone Through, His Life Isn't Dramatized - 86%

When most films don't have the usual dramatization of everyday life, you're reminded why most veer towards sensationalism. But with Cohn's The Last Shift, you get the right balance of real-life drama with entertaining angles to keep you watching until the end.