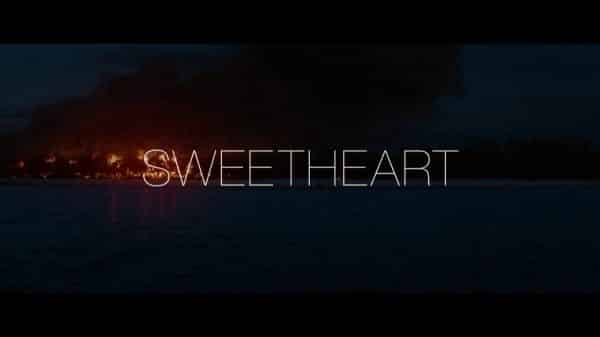 Jenn, alongside her boyfriend Lucas, friend Mia, and two people named Zack and Brad, were on a boat until a storm hit. From there, Jenn washed up on an island, which was previously inhabited, and worked on surviving and getting rescued. However, a creature, of origins which are solely defined as a dark hole in the ocean, is hunting for her just like it did the last people who washed up close to its home. Leaving you to wonder, with only the basic knowledge of how to survive, can Jenn handle a monster as tall as a basketball player, as strong as a bodybuilder, and has claws, speed, and very few weaknesses.

The truth doesn’t always come with a receipt. Sometimes all we have is our word.
— Jenn

Kiersey Clemons Holds It Down

A good portion of the movie is just spending time with Clemons without much dialog – Think Will Smith in I Am Legend. To no surprise, she handles herself well. For even though she barely says much, and the silence is filled by noises of her setting up camp, exploring, and hunting, she has this certain presence. One which makes watching her focus on survival enjoyable. Plus, once the creature shows up, you are invested to the point you want to see her live, and that helps this film immensely.

The Monster Not Only Looks Cool But Is Formidable

While the creature does look like someone found a well-made cosplay version of The Shape of Water monster, it brings on just enough fear for you to clutch once or twice. Plus, considering how it flings people and how quickly it moves, as much as you may like Jenn, you are also prepping to say goodbye throughout the movie. That is how formidable they present that thing.

There Is Minimal Backstory Here, So When it comes to Lucas and Mia, You May Not Care About Them

It’s not until 40 minutes into the movie you get any sense of who Jenn is, why is she on this island, and who was she with beforehand. However, again, Clemons has that oomph which makes you care. Cohen and Lawrence, on the other hand? At best, they deliver the information you want about Jenn but as for their own characters? Them possibly becoming fish food isn’t much of a loss.

Primarily since they are just established to be rich kids and with the way Jenn is spoken to, she seems less like their friend and more so their get out of seeming racist card.

This entire film, and how much you may enjoy it, rides on getting into Jenn. If you don’t, this film is not going to appear to you at all. However, if you do grow attached to Jenn, while you may not get the best monster movie, I’m pretty sure you’ll learn to appreciate Clemons as an actress as we do.

Jenn is someone touted as a bit of a Debbie Downer. Her boyfriend Lucas even says, while on his boat, since he is rich to the point of supporting her through school, that when she decided she wasn’t enjoying herself, that is when the storm happened – the one that caused them to be stranded. However, what she didn’t plan for is something that looks like the monster from The Shape of Water, which apparently has been killing whatever it could feed on since 1994 – at minimum.

And, unfortunately for Jenn, while Brad and she come to shore at the same time, he dies not too long after she foolishly decides to remove a barnacle from his abdomen. Leaving her, for days, to fend off the monster, or hide from it, on her own. Making Mia and Lucas show up initially a godsend, but they want to stay and don’t fully believe Jenn when she says there is a monster, and they need to get the hell out of dodge.

So, as any person with any sense would, she tries to leave them. The only problem being, she tries to in broad daylight since the creature is most active at night. Thus, she gets captured and tied up, and it isn’t until Mia gets killed that Lucas wakes up and decides it would be good to leave. However, be it the blood in the raft, that isn’t really explained, or Mia not being filling enough, the creatures attacks them, basically destroys the raft, and while Jenn gets away, Lucas is taken into the creature’s home.

Leaving Jenn to set up an elaborate setup to kill the creature, and she does. But in the process she also causes a fire that sets a good portion of the island up. However, considering she is out of flares, this might be her best chance of getting seen and saved.

Yes? This is assuming Jenn gets saved. But the film would turn from horror to drama since Lucas made it seem Jenn didn’t have anything. Now, whether he meant that in terms of her being poor or having no family? I’m not sure. However, considering she is the only survivor, and they were well off white kids, there is a lot of explaining to do.