Wherever I Look
Recaps, Reviews, and So Much More
Home MoviesMixed (Divisive) Out of the Furnace – Overview/ Review (with Spoilers)
Mixed (Divisive)Movies

Out of the Furnace – Overview/ Review (with Spoilers) 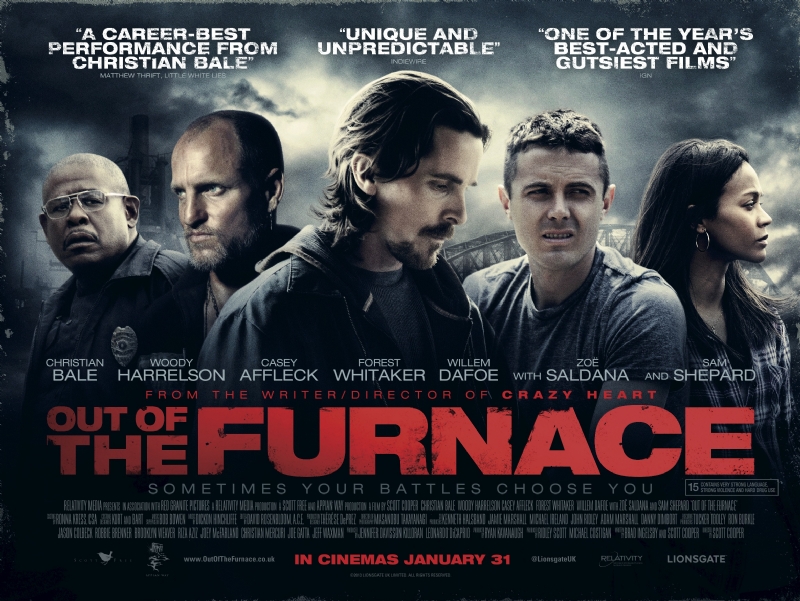 This rural drama has all the ingredients to be good but ends up being a disappointment.

I have been seeing trailers for this for months and even saw Casey Affleck talk about it when he was on Real Time with Bill Maher but for some reason, this film came into my local theater and quickly was replaced. Such should be considered odd since each cast member has a familiar face, but then you see the movie and begin to understand.

The story of Out of The Furnace focuses on the steel mill town raised Baze brothers Russell (played by Christian Bale) and Rodney (played by Casey Affleck). Russell is a man who does as his family has done for generations, work at the steel mill then go to your loved one, of which for Russell is Lena (played by Zoe Saldana). Rodney, on the other hand, works for the military seemingly to escape the family pattern of working in the mill but ends up only trading boredom and stability for the gruesomeness of fighting in the Iraq war.

These two lead us on a journey in which we watch them both fall and while Russell is given the chance to stand back up after a drinking and driving conviction, which puts him away and causes him to lose Lena to  officer Wesley (played by Forest Whitaker), Rodney finds himself relying on assistance to stand on his own. You see, while Russell was away, Rodney had to deal with their dad dying as well as mounting debt which seemingly the military wasn’t helping much with. So this leads to him turning to local shark John Petty (played by Willem Dafoe) who he throws fights for.

However, once Russell is out, and back at the mill, Rodney eventually figures that he minas well give into fate, but not before one fight to wipe his debt. Enter Harlan DeGroat (played by Woody Harrelson), a Jersey drug dealer, with a penchant for violence. He changes everything for the story by taking out a few characters and getting on Russell’s bad side, and despite Wesley saying he got things handled, Russell decides to play vigilante leading him to face off with Harlan.

Honestly, when it comes to praise I think more so what is praiseworthy is the marketing of the film than maybe the film itself. The reason I say that is, the trailer is quite good and paints Harrelson as a compelling villain, Bale as a do-it-yourself type hero, and then Affleck seems to be the dumb kid brother who seemingly looked to his bro to be a father figure. Then when you add the Affleck interview on Real Time you are given the idea that perhaps Out of the Furnace may include Affleck portraying a strong military character dealing with multiple tours and the PTSD which comes with them. But, unfortunately, while Affleck’s Rodney does bring his background of working for the US military into play, it is more a subplot than something really focused on, as it should in my opinion.

And really, considering how ripe the time is for such a story, it really is a shame because the rest of the movie, outside of Rodney’s subplot, are overdone soap opera storylines. All the while, you have Rodney here who, I think, would have made a better focus for the film and I’d even say that it would have been a good film if the focus was on Rodney’s life and Russell was just there to show what type of life he was trying to escape from. I mean, they could have kept his gambling issues and what have you, but considering that America has not yet been flooded by a huge amount of stories, at least that I know of, featuring veterans coming from the Iraq war, this could have been the one which set the precedent. For, as of now, seemingly most of the film featuring the current, or recently ended, wars of American history have painted themselves as action movies. Meanwhile, outside The Invisible War, which focuses on the friendly-fire of soldiers raping their comrades, there aren’t too many movies out there explaining, or portraying, the other horrors which turn scrappy and joyful young people into those who seemed to have aged 20 years.

Aside from that comment, though, my main issue with the movie is that everyone is pretty dull. Bale tries to show that he can be more than the former Batman, but ends up playing a vigilante anyway, just without the voice effect; Whitaker, for those who follow his career, reminds you that outside of the big films like The Butler or Last King of Scotland in which he can emulate a person, he often times is dull; and while Harrelson is the supposed villain of the film, after seeing so many films just this year alone, I feel having a 2D villain whose claim to fame is a short-temper just feels lazy. Also, Harlan’s face off with Russell is the least inspired finale I have seen, and wastes the smidge of build the film has.

Out of the Furnace isn’t a bad film, it just feels lazy, and because of that, I understand why the movie’s name was a whisper in the wind. When you compare it to every other movie that came out this year, be it theatrical, DVD, online, or a TV movie, it just doesn’t compete well. It uses the old revenge plot and does nothing new of it, while having a decent story it could have used with Rodney which gets wasted. Hence why this is just for TV Viewing. Out of the Furnace may have had decent marketing, but overall it ended up being another film which seemed better when advertised than when experienced.