Wherever I Look
Recaps, Reviews, and So Much More
Home Movies Ocean’s 8 – Recap/ Review (with Spoilers)
Movies

Table of Contents show
1 Summary
2 Highlights
2.1 The Various Methods Used Were Rather Clever
3 Criticism
3.1 What Could Be Considered A Twist Within A Twist (Climax Spoiler)
4 On The Fence
4.1 You’ll Find It Funny Depending On Your Humor
4.2 There Isn’t A Push For Longterm Investment
5 Overall: Mixed (Divisive)
6 Follow Wherever I Look on Twitter, Like us on Facebook and Subscribe to the YouTube Channel.
6.1 Check Out Other Movie Reviews

After 5 years, 8 months and almost two dozen days, Danny Ocean’s sister Debbie has gotten out of jail and within a day is back in conversation with her old friend Lou. The woman who has long been her partner and seemingly, while Debbie has always been the planner, Lou was the one who handled recruitment. Which, for the heist Debbie has planned? Oh, she needs the best team she can get. Of which, with it being the met, and her wanting to take advantage of how society is, she wants an all-female team. No men involved.

Something which isn’t that hard of a task for Lou since she has a good eye. Hence how she finds the hacker Nine Ball, real name Leslie, Constance, a local pickpocket. Leaving Debbie to handle convincing Tammy, an old friend with a knack for getting things off trucks, and Amita, an old family friend, involved. Thus giving her the team she needs but oh, there is also Rose Weil. A designer who hasn’t been in style since the 90s but thanks to Anna Wintour finding her to be a friend, and Rose being deeply in debt, she joins the squad.

Leaving only the job. Robbing a Cartier necklace worth $150 million from the neck of Daphne Kluger. A supposed airhead who may be more cunning than she seems. Though, as much as this all may be about Debbie getting back on her feet, it is also about knocking Claude off his – for he is the reason Debbie got caught.

Thus leading to the question of: Considering how many people involved, and it being quite a bit of years since Debbie has interacted with them, can they be trusted? A former partner, Claude, already burned her once and while she has gone over this plan 5 years, and has had it perfected for 3, something could go wrong. Especially since part of the heist is personal revenge.

The Various Methods Used Were Rather Clever

With having little to no memory of the George Clooney franchise, pretty much I came in fresh and was tickled from the start by Debbie’s grifting skills. Whether it was figuring out a way to easily take some perfume and makeup, getting a hotel room, and other ideas which will make your devious side take note, things started off good. In fact, sort of like a comedy special, it felt like a warm-up of what was to come. Letting you feel out what ways, between Debbie and Lou, they would manipulate and con people.

What Could Be Considered A Twist Within A Twist (Climax Spoiler)

I’m sorry but learning Daphne Kluger was brought into the heist for the sake of having girlfriends and because she was lonely, something Tammy calls out, was stupid. Granted, before that was revealed, I thought John was someone in on the heist due to the whole “Cupid” subject when he came about. Yet, while he does end up part of it, Kluger is the one who is a bit of a shock. Though not the type of shock that doesn’t seem unrealistic and convenient. 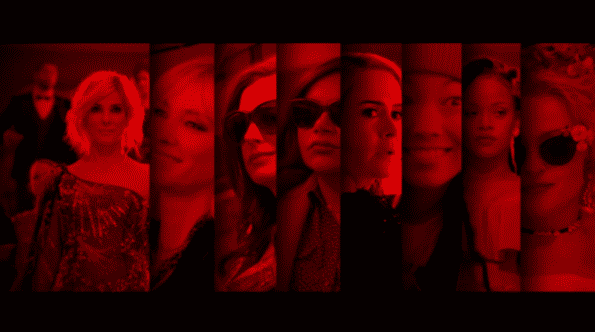 You’ll Find It Funny Depending On Your Humor

Sprinkled throughout the film are a bunch of cheeky moments. Not many which will stay with you after the film is over, but at the very least Awkwafina is able to shine using the persona she is known for. As for everyone else, Blanchett has her moments, as does Bullock naturally, Hathaway to a point, but everyone else is kind of just part of the crew.

There Isn’t A Push For Longterm Investment

One of the major issues of this film is that backstory is only done for Debbie and everyone else isn’t developed much. Yes, their motivations become clear, either through a passing conversation or a montage at the end of the film, but we never get to know Nine Ball, Amita, Constance, or whoever to the point their actresses aren’t what hook you but the character they play.

Which, as you watch the film isn’t a problem since everyone is playing their part, doing their job, and it is a well-oiled machine. However, when all is said and done, you don’t get that vibe of missing so and so or hoping there is a sequel to see more of this character or that one. For, in reality, all you got was a twisting of the actress’ public persona to various degrees. Making it where your investment solely stays with them and not to the character or the possibility of this becoming a new trilogy.

Ultimately, this movie feels more like a statement than anything else. One which, while piggybacking off the name recognition of a trilogy which ended over a decade ago, wished to prove that women can inhabit roles traditionally handled by men and it can be just as entertaining. Something you won’t get any arguments from me about but the issue here is that, this is a film which should have been about building up its characters. That is, as opposed to only truly building up and making the rest just tools to carry out their story.

Leading to why the mixed label. While Debbie Ocean makes a good focal point, leads a good heist, and attracts some eccentric personalities, there is nothing about this movie which makes you clamor for a sequel. Heck, with its abrupt end, it seems like a think piece about how, no matter what the franchise, it could be just as good with a woman as the lead. But, the problem is with that argument is that films which do gender-bending, like when they race bend, don’t fully adapt something until it is new. All they do is acknowledge the changes, lightheartedly make jokes out of them, and seem to base their merit by exploiting a recognizable name to draw curiosity.

So when it comes to Ocean’s 8

, while I do believe you will be entertained by this, I would say don’t raise the bar too high or the little things will bog down your enjoyment of this. Especially if you are the type who can get hung up on convenient twists to solve story issues or prefer actors to become characters rather than embellished versions of themselves.