Wherever I Look
Recaps, Reviews, and So Much More
Home Movies Next Gen – Recap/ Review (with Spoilers)
Movies

Next Gen – Recap/ Review (with Spoilers)

, we watch a girl reconcile her abandonment issues through a robot meant to save the world.

Table of Contents show
1 Summary
1.1 Question(s) Left Unanswered
2 Highlights
2.1 It’s Like a PG or PG-13 Pixar Movie
2.2 The Action
2.3 Criticism
2.4 So, About Dr. Rice & Justin
2.5 The Villain’s Motive Is Too Basic – Spoils Twist (There Was No Way Around It)
3 Overall: Positive (Worth Seeing)
4 Follow Wherever I Look on Twitter, Like us on Facebook and Subscribe to the YouTube Channel.
4.1 Check Out Other Movies.

Sometime when Mai was a toddler, her dad left. It isn’t 100% clear why, but he left and her mom, Molly, coped by investing in robots. For, unlike humans, they don’t leave. Problem is, her investment in robots came at the cost of a relationship with her daughter. Leading to a deep-seated hatred of robots for Mai.

That is, until she meets Project 77 or 7723 when sneaking about IQ Robotic headquarters. This robot, who imprints onto her, becomes her best friend. One who she uses to have a massive cathartic release by destroying a whole lot of robots. Problem is, 7723 was not supposed to be made public. For the purpose of 7723 was to counteract Justin Pin’s plan.

For, you see, Dr. Rice, who co-founded IQ Robotic knows Justin’s true plan and 7723 is the only one who can stop it. However, Mai’s discovery, and her time with it filling its memories is a cause for concern. Since it is truly becoming attached to Mai and only has 72 hours worth of memory. Of which it decides, rather than maintain storage of how to use its weapons, it will keep Mai. Something which could doom the entire world. Especially if Justin has his way.

Taking note of the bleeped out curses, and the fact the base of the film deals with Mai not wanting to be physically abandoned, or neglected, this movie may appeal to kids but can be for adults as well. For like Pixar productions, while you may figure this is made for a specific demographic because of the art style, that seemingly is just for marketing. As we get to know Mai and see how she uses 7723 to lash out at robots who have replaced a lot of humans, and everyday social interaction, it becomes clear this film has a deeper meaning.

One which deals with how technology is replacing people, and how it is isolating people more and more. To the point things that really matter are being forgotten. I mean, from police to the mail person, even teachers, so many have been replaced by technology that is completely robotic. Making it where, you’ll notice, nearly every adult seems more attached to a robot than another human being. Heck, even Mai falls into this pattern just because 7723 may not be capable of hurting her like her dad did.

And I think that speaks greatly for what could be a rather daunting future. The fear of rejection leading to robotic replacements in which the AI gets better to make human connections less necessary. Leading you to wonder, what’s the population count after 6 generations of IQ Robotic’s devices?

Once Justin’s plan is forced into action, while we may not get a Japanese Anime, awe-inspiring kind of battle, we do get one which definitely holds your focus. Especially since you’ll be fully attached to Mai, 7723, even Molly and Greenwood who we barely see in this nearly 90-minute movie. For with Mai’s dad not being seen since he left, and named characters being killed, it does make you wonder how far could this movie go? Will they leave Mai an orphan? Kill Molly and then her dad shows up? Will there be some odd Willy Wonka moment where she loses it all but ends up head of IQ Robotics in the end?

That is how puzzling the action leaves you for it isn’t necessarily clear where the line is.

So, About Dr. Rice & Justin 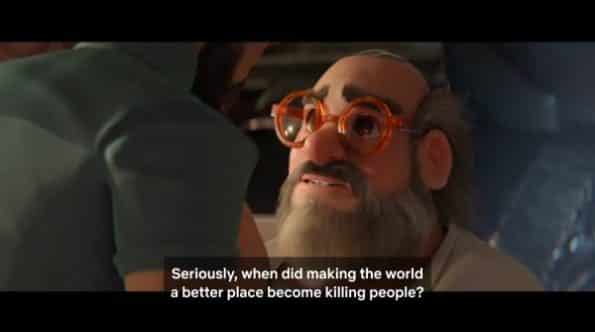 There is something inherently frustrating about a movie which is self-aware about its own flaws. Such as Justin cutting off Dr. Rice from giving us backstory about who he really is and what he has done. Leaving you to wonder, did no one but Dr. Rice notice? Also, taking into consideration what happens to Dr. Rice shouldn’t that incident have been a bigger deal? Even his personal assistant takes like, a hot minute, before getting over it.

Taking into consideration how much depth was given to Mai’s trauma of being abandoned, Dr. Rice being swept under the rug, alongside Justin’s truth, I felt like that should have had more oomph. Be it Dr. Rice not honestly knowing, maybe Dr. Rice not being a behind the scenes guy but as beloved as Justin, or something. It was just so weird that Dr. Rice, who assumingly was human, the person who made 7723 to save the world, could be brushed aside like he was one of the hundreds of G6 robots are interchangeable.

Honestly, this film is kind of weird – in a lopsided way. Again, taking note of how well-developed Mai is, it makes you wonder why Ares wasn’t handled the same? I get the concept of perfection gave him a weird complex, but that seems so basic. If anything, you’d think they could have taken it deeper, maybe even with a flashback, to show how Justin calling Ares perfect, yet working on fixes and upgrades made Ares feel. Thus deepening the whole abandonment theme and also addressing how disposable technology is, as humans are sometimes treated and feel. Thus explaining its actions. Outside of the film’s villain lacking any real depth, as well as how the film mishandles what happens to Dr. Rice, which should have left some serious trauma for Mai, Next Gen is really enjoyable. It gives strong Pixar vibes, thanks to Mai and her relationship with 7723, as well as her lack of a relationship with her mother and father. Also, between the action and how the film has the ability to get you teary-eyed, it really pushes you to think Netflix is really trying to end the summer right.

Hence the positive label. While Justin is very basic and you have to fill in the lines to give him some depth, this is a rather enjoyable movie. One which, you surprisingly don’t get bored by or feel the need to occasionally pause and wander. Really making me wish Justin/Ares situation was handled better, alongside Dr. Rice, for then this would have definitely been recommended.

The father left Mai and her mother, but later died. You can see it in the beginning credits. So Mai was abandoned and then was never able to heal her abandonment as her father died before reconciliation.