The loneliness of a dilapidated Earth is the focus IO, a rather dry sci-fi drama that could have been better than what was delivered. drama.

On Earth, long after the point where the planet couldn’t be rescued and has become difficult to live in for the average person, there remains many who have yet to escape. One of them, Sam, is the daughter of Earth advocate Dr. Harry Walden. A man who, on one of the final broadcast on Earth, implored people to stay for a way would be found to live and thrive on the planet once more. Fast forward a couple of years and 100 ships have left Earth for Jupiter’s moon IO, and we’re coming up on the last ships of the Exodus.

Sam, managing a full functioning greenhouse, testing her ability to adapt, and create bees who can too, contemplates leaving Earth but the feeling to do so isn’t strong. However, with a man named Micah, traveling by hot air balloon, showing up, she is given both a reason to leave and a reason to stay. Which will be her decision?

Qualley as the Lead

There is something weirdly serene about Qualley’s performance as Sam. For the 20 some odd minutes we spend with her, before Mackie’s character shows up, you feel like you’re in an adventure film. Not one mirror the likes of Lara Croft, but a film that will have this young scientist, one of humanity’s last hopes, explore the world and look for ways to trigger it being as it once was. At one point, I even got I Am Legend

vibes for there is just something about Qualley which made it feel like, when Mackie arrived, he wasn’t essential. He did bring a different story and shifted the narrative, but the one Qualley was on was good enough.

Loneliness & The Human Need For Connection

Being that the sci-fi genre is usually associated with peril, bullets, and monsters, it is a bit strange when there isn’t any imminent danger. Yes, mother nature is making a comeback, but outside of the occasional storm, Sam was safe. So the entrance of Mackie’s character Micah, racked with guilt, trying to push Sam off world felt almost unwelcomed.

Maybe it is because he pushed the idea for human connection in such a way which made it feel like he was downplaying Sam’s work. It could be that him trying to save her was more about his guilt than about her well being. Heck, it could just be Micah was low-key annoying. I can’t put my finger on it but while this film would have remained slow, dreary, and a bit artsy without Micah, there is only one benefit to his inclusion and what he gave might not have required much effort. 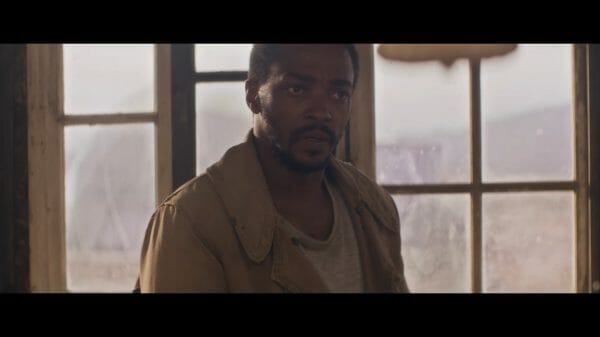 There is nothing exciting or overly moving about IO. While Qualley does present herself as an actress who could hold your attention in a dystopian future, with her being one of the few, if not only, people on screen, she, unfortunately, shares the film with Mackie. Someone who doesn’t deliver a bad performance, but does shift the movie’s narrative. Thus switching the film away from celebrating human perseverance to our dependency on love, connection, and rather than preserving life, finding something new when what we know is no longer convenient.

Leading to the mixed label. IO certainly presents an interesting, post point of no return when it comes to global warming. However, what feels like an excellent solo film seems interrupted by the inclusion of Mackie’s Micah and ultimately feels like a stolen opportunity from Qualley.