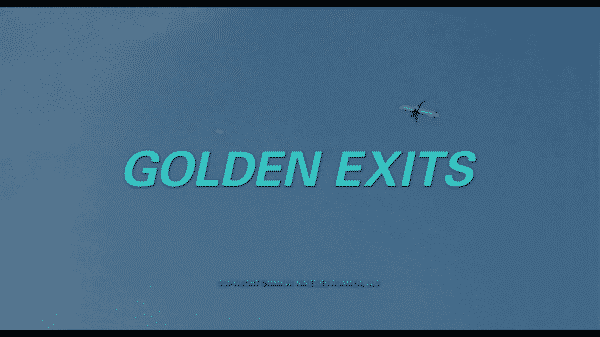 Golden Exits is a melancholy indie film which relies heavily on Emily Browning’s charm to get you through it.

A 25-year-old Australian native, Naomi, has come to New York to work under Nick, an archivist. She finds his trade appealing since, apparently, in Austrailia, there isn’t much work in archiving since most people throw stuff away. So, here she is in the big city and entering a man’s life after he has had a rather tumultuous period.

You see, despite Nick being a rather generic looking, middle-aged man, he seemingly has had an affair before with one of his assistants. So, naturally, with this young woman working in an office the size of some people’s bathrooms, Alyssa, Nick’s wife, is worried. Though, Gwen, her older sister, doesn’t help matters. She is divorced, and slightly happy about it? It is rather hard to tell. She seems miserable but prefers her misery as is in comparison to the alternative of dealing with her own misery on top of someone else’s.

But, it isn’t just those three eccentrics Naomi interacts with but also her mother’s, friend’s, son, who off and on sees her. His name is Buddy and he is married to Jess, who is a girl he hired at his studio and eventually, they ended up getting married. However, with the way he tells the story to Nick, who he has a mutual friend with, don’t see it as romantic at all. In fact, like how Alyssa is worried about Naomi, Jess becomes the same way too with time. Not that we are told she has any reason, but with her having a sister like Gwen, Sam, who happens to work with Gwen, you can see the overarching themes here.

Of which is laid out for us: Love, jealousy, and a sense of deficiency.

This is the type of movie in which only fans of “mature” cinema can enjoy. At least, reading over some reviews of this, that is what I see. Personally speaking, this is the type of film which reminds you why charm and charisma matter so much for actors. Otherwise, it is like watching someone do a job that only matters to them as long as their check clears.

Luckily, Browning presents some type of life and energy amongst these characters who are at different points of being absolutely miserable in life. She has a past which is touched upon, so that it is made clear she didn’t appear out of nowhere, her conversations with Gwen help you appreciate what that character brings to the movie, and though her relationship with Buddy is odd from start to end, she makes his character relevant. If not also makes you question how appropriate his relationship with his wife is and whether Jess married out of love or convenience.

A Tale of Two Sets of Sisters

It is easy to see Jess and Sam are on their way to becoming Alyssa and Gwen. It is pretty much put front and center. Buddy, real name Arthur, is essentially Nick and with his wandering eye and acknowledgement an affair could happen with Naomi, we see what might just be the inevitable. Then between Gwen and Sam, you see Gwen before she had some form of self-actualization. Granted, not the kind which necessarily makes her at peace with herself, or even happy, but sure enough of who she is that she has no desires to change that for anyone.

And one of the benefits of seeing this dynamic is because neither set of sisters do we learn a huge amount about. So seeing a sort of before and present version of who these people are, it helps bring some sort of depth to them. If not a reason to pay attention when Naomi isn’t around.

This Film Is Certainly Not For Everyone

One of the first things we learn about Naomi is that she wants to, one day, make films about normal people. In many ways, this would be the kind of film she would make. One which doesn’t have people who have theatrical moments or are of any real interest. They are just people. With relationships you may raise an eyebrow at, certainly may not understand the dynamics of, but nothing embellished in such a way to make it seem like these people beg for attention or playing them is a meaty and juicy role.

And while that may work for some, for others it will make for a real boring watch. For even though I note Browning’s charm, at the same time it is the same charm and similar character to what she always plays. Someone running from something or someone, trying to have a more fun or fulfilling life, but ultimately not finding peace. Pretty much, that sums up her adult career.

Then for the rest, unless you are fans of them, I do feel like you’ll just be watching and waiting for someone to explode. For they seem to all be containing their emotions to the point they have broken through into numbness. With some still showing speckles of life, like Gwen and Nick to a point, but only when someone truly agitates the hell out of them. Otherwise, they almost appear meek.

Well, with the exception of Buddy but with him being a low-key douchebag, his appearances are more worthy of an eye roll than praise for saving you from everyone else.

My general policy is to always say something positive about any production, because often times it took months of hard work that I cannot imagine the stress of. However, when it comes to Golden Exits, in the long run, I feel that unless you have an appreciation for stories about boring, everyday people, and those choking on how little their lives matter, you likely won’t enjoy this. That is, unless you are a fan of one of the actors for each and every one are pretty much playing the type you know them for. Which may be as much a bad thing as it is a good thing, depending on how you look at it.

But what keeps this from simply being labeled mixed is because, you have to pay to see it currently. If this was a Netflix film, and the film came with the package, then it would be labeled mixed since while it is a bore of a film, at times, Browning’s charm could make it worth your while. However, with the rise of Netflix and other platforms which offer a huge array of movies for the price of this one, it really puts indie films like this on a tougher scale. For now, you gotta ask, “Is this film worth the price of one month of 20+ films just like it, but doesn’t cost me more than I’m already paying for?”

And when it comes to Golden Exits, unfortunately, the answer is no.