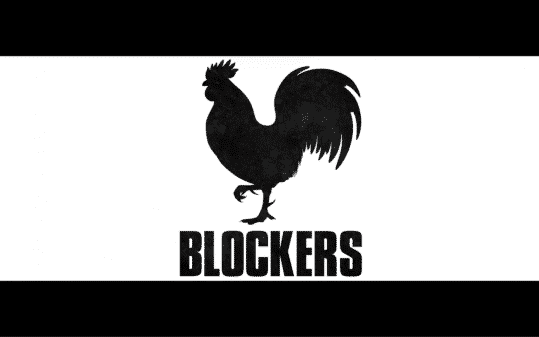 While funny at times, there is something about Blockers which makes you feel you’ve seen other movies do its joke and story better.

Trigger Warning: You Will See People Vomiting For A Good 2 Minutes In The Movie.

It’s prom night and that means the beginning of the end. For Lisa, Mitchell, and Hunter, it is the end of their children’s high school years and for their daughters Julie, Kayla, and Sam (respectively), it means the end of their virginities. Which for Lisa and Mitchell, when they learn what is to happen, is a huge problem. For Hunter though, Sam’s absentee dad, it only becomes a big deal because Lisa and Mitchell are trying to stop his daughter from having fun and she may have sex with a boy. Something that is only a problem for Hunter because, despite barely knowing his daughter, he’s sure she is lesbian and doesn’t want her doing something she’d regret.

Thus leading to a wild night of the parents trying to track down their kids as their kids somehow dodge them left and right. Which, ultimately leads to a confrontation dealing with the girls having autonomy, being trusted, and some mushy moments.

What you see attempted in the film is a balance between the comedic aspect of faux progressive parents trying to stop their kids from having sex and the girls succumbing to internal peer pressure. All of which is written in a way which is supposed to make the girls sound hip and the parents overprotective and out of touch. Which is funny, in a sort of corny way, but it mostly lacks heart.

That is with the exception of Sam and Hunter for, and I can’t believe I’m saying this, Ike Barinholtz gets you a little bit emotional. Note: He is still playing the character we have become well used to him being, but it gets toned down and developed. For with him noting what happened with his ex-wife, and how he got ostracized because people only knew what he did, you see a different side of Barinholtz. Add in him trying to connect with Lisa, Mitchell, and Sam, and it leads to some oddly touching moments. The kind where, especially towards the end, may make you a little teary-eyed.

Though, I should note, I’m sappy so maybe only if you’re the sensitive type you may feel some tears forming.

I don’t know what it is about the characters Leslie Mann plays, but often it is so hard to like or enjoy them. Lisa especially because the character is so desperate for sympathy and being treated like her issues are the worse and neither Mitchell nor Hunter’s can compare. Add in she doesn’t really add much to the jokes and it makes it so when Mitchell goes off on her, it is a vicarious cathartic release.

It’s Comical But Not Memorable

There’s a good 19 or so chuckles in the movie. Most of which come from Mitchell, Hunter, and Kayla. However, with less than a day passing since my viewing, it is hard to come up with a stand out moment. Mostly because a lot of the jokes seem like they were “inspired by” other movies which went full raunchy. Making it where, I think if someone was a real comedy movie aficionado, they could pinpoint where each and every joke came from in a snap.

It May Come Off A Little Preachy

You know how most films, like Ready Player One have messages in them, but leave that to you to discuss or read through 3rd parties? Yeah, Blockers doesn’t do that. Between Marcie, Mitchell’s wife, reprimanding Lisa for being a bad feminist, the kids going off on their parents, and things of that nature, you get a lot of double standard spiel.

Which I’m not saying doesn’t exist, but it is so clunky, in terms of how it is placed within the film, that it brings this feeling of being lectured. As if you wouldn’t recognize the issue if the film didn’t present it to you.

While there is some desire to applaud the movie for trying to talk about young women’s autonomy and owning their sexuality, the delivery has mixed results. It leads to some interesting jokes but at the same time, it pushes the idea that you can’t think of the deeper meaning behind the jokes yourself. Or as if nearly every website hasn’t gone into the topics this movie has done, often in funnier or more nuanced ways.

Leading to why the mixed label. Despite being fairly funny and showing a side to Ike Barinholtz we rarely see, sometimes the momentum is nipped at the heel by a heavy-handed message. Add in jokes that don’t leave a lasting impression and you get a movie good enough for a matinee or a streaming hangout, but not much else.