Wherever I Look
Recaps, Reviews, and So Much More
Home Movies Bleach (2018) – Recap/ Review (with Spoilers)
Movies

Covering the first 17 episodes of the animated series, Bleach feels like a to the point movie cutting the majority of filler, and probably some essential characters.

Table of Contents show
1 Summary
2 Highlights
2.1 It Really Does Push You To Wanna Watch The Anime
2.2 Hana Sugisaki as Rukia Kuchiki
3 On The Fence
3.1 The Story Does Feel A Tad Rushed
4 Overall: Mixed (Divisive) | Watch on Netflix
5 Follow Wherever I Look on Twitter and Like us on Facebook.
5.1 Check Out Other Movies.

High school student Ichigo is someone who is able to see the dead and, in his spare time, helps them find rest. One night, quite randomly, a reaper named Rukia shows up and Ichigo ends up joining her to deal with a hallow. A being which died with a grudge, in their spirit and thus made them into a monster. In this fight, after Rukia got her butt whipped, she asks of Ichigo, since he has a strong spiritual pressure, to take some of her power to defeat the beast. Accidentally, it seems she gives him all of her powers which does allow him to defeat the hallow but causes major issues for her.

Mostly in the form of breaking reaper codes. Leading to her older brother, Byakuya, and his top soldier Renji looking for her. Not to protect her, mind you. If anything, she has a decision to make: Kill Ichigo and regain her powers or they both can be killed. A decision which becomes increasingly hard as Rukia grows attached to Ichigo in ways she seemingly never was to her brother or Renji.

It Really Does Push You To Wanna Watch The Anime

Though long aware of Bleach, with it being one of those shows with hundreds of episodes, I never got into it for who really has time to watch 300+ episodes? Yet, with this simplified version, which appears to condense, immensely, the first 17, I must admit I’m tempted to watch the show. It presents an interesting foundation of us learning about reapers, the soul society, hallows, and also reapers apparently committing genocide against the Quincy people – for reasons not revealed.

Ichigo makes for an interesting protagonist who, thankfully, isn’t touted as your usual fish out of water but did have some background before Rukia came into his life. Maybe not a fighting background, but had some knowledge of the spirit world. Add in the 4+ fights we see, two against hollows, one against Renji, and the massacre which is Ichigo vs. Byakuya, and it makes you crave more. 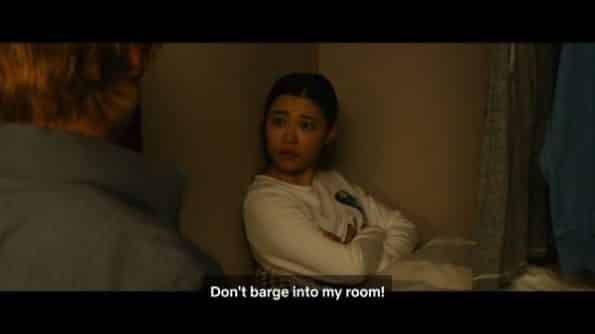 With everything happening because of Rukia, even if Ichigo is the star and actor Fukushi has to play leading man, Rukia can’t be a slouch. Which Sugisaki doesn’t allow what so ever. Though treated as someone in less than tip-top shape, her attitude towards Ichigo brings about this comedic vibe which makes it so Sugisaki seems capable of stealing a scene on a whim. For whether it is whooping Ichigo’s behind in training sessions or giving as much emotional oomph as Ichigo, when it comes to dealing with mourning his mother Masaki, Sugisaki takes a rather simple character and expands it. Pushing the idea, despite this being just an okay action movie, if the script utilized her more, she could have elevated it further.

The Story Does Feel A Tad Rushed

If you compare what happens in the anime over 17 episodes to what happens in this show, while you’ll appreciate the multiple training scenes, and the humor Rukia brings to the film, everything else may feel lacking. Take for instance the movie establishes many things like Soul Society, Reaper Code, the Quincy clan, amongst other things which encompass Bleach. Many of these things are simply established and not really delved into further. As if the film doesn’t want to bog you down with details and wants to stick to characters looking cool, watching Ichigo train for the big fights at the end of the movie, and making sure those fights pay off.

Which is part of the reason one of the highlights is that this movie makes you want to watch the anime. For, on one hand, if you just like seeing action movies with a comical character like Rukia and people finding mystical beings, this gives you the basic information you need. However, if you’re the type who like a fully built universe, rather than tidbits and just enough of a foundation for the film to build off, this film may come off a bit frustrating. 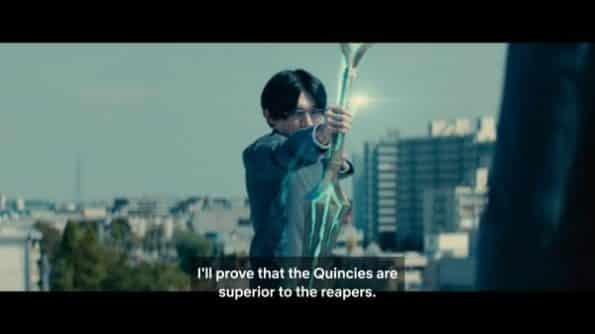 Urya (Ryo Yoshizawa): I’ll prove that the Quincies are superior to the reapers.

Personally, I found the whole Quincy clan thing to be a curious subplot and its introduction threw me off since I figured Urya was going to be some kind of secondary villain. Especially considering his people were massacred by reapers and between Ichigo and Rukia, neither in top shape, he had two opportunities to kill reapers. Yet, he skipped out on this. Be it for honor, maybe thinking Ichigo isn’t like the rest, or for other reasons not developed since Urya’s introduction might have been for the sake of sequels vs. making this movie be something which could stand on its own.

While certainly better than many live-action anime adaptations, there is still progress to be made. Depending if you’re more about the action, maybe a giggle here and there, that might be the biggest factor in your enjoyment of this. For while we get a decent amount of backstory, it’s only to lay down the foundation for something more. Either for future sequels or else to direct you to the anime or manga.

is an enjoyable movie, which you’ll likely be able to watch in one sitting. However, there is a need to question if more should have been cut to not leave some lingering storylines out there. If not maybe different pacing, for the movie will feel like it is over in a blink since it doesn’t get too heavy when it comes to Ichigo’s mother dying or him building a true friendship with Rukia.

I really liked the decisions they made with things to cut and leave in. They’ve left the stuff that will be needed if the adapt more into movies later, but really cut out a lot of the fluff and filler that doesn’t really go anywhere. They also combined sequences together to cover multiple plot points together rather than focusing on one thing and then moving to the next.
I don’t think I know what I expected going into a Bleach movie but I expected it to be a bit of a mess as there is just too much content for it to fit in a film. The end result was pleasantly surprising, though I wondered how someone not familiar with the material would go because some ideas really are introduced and moved on from fairly quickly.

I’m hoping for more since I mostly digged this condensed version. It’s just it ended kind of abruptly like they weren’t sure if this could garner a sequel. Though considering they only got through about 17 episodes, it would take a huge amount of movies to cover the entire series. Not sure how many if they stuck to the major points though.