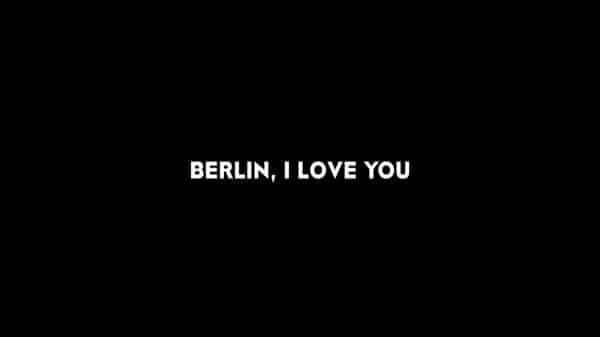 While many of the stories end at their peak, lack closure, and barely feel about Berlin, Berlin, I Love You, still reminds you why this long-running series continues.

Berlin, I Love You Plot Summary

In a series of shorts compiled together and loosely tied, we witness around two days in various peoples lives. Often, what each are dealing with is a feeling of isolation and someone coming into their life and seeing them. Perhaps validating their decisions and making them happy as they weren’t before.

There isn’t One Unlikable Story In The Bunch

From Embassy which seems like a spy thriller, Hidden which comes off like a political drama, to shorts like Love Is In The Air and the simple romance Lucinda in Berlin, there isn’t a short which makes you want to fast forward. Granted, some are weaker than others, like the Keira Knightley and Helen Mirren starring Under Your Feet. However, that’s because it presents a short which seems like a truncated full-length movie.

Hardly Any Give A Sense Of Closure

Which is one of the major issues with the film as a whole. A lot of the shorts seem to end just as they are reaching some sort of emotional apex, and it can be quite frustrating. For example, Love Is In The Air is about a man who encounters the daughter who he has ever physically seen for her mother left him. So for us to be left wondering if they reconnected seems cruel. Yet, for many of the shorts, we’re left on either a cliffhanger like that or as one character, Sara, sings as the credits roll, you get what feels less like closure and more so what could be seen as a yes or no answer. Especially when it comes to the different relationships presented and answering whether two people are together or not.

While Germany has been one of the major countries affected by the immigration crisis, it doesn’t make the fact most of the characters aren’t German less of an issue. For whether they are Turkish, Israeli, English, or American, it seems they dominate nearly all of the speaking roles. Making it so you don’t feel like you get a genuine viewpoint of what it is like to live in Berlin, or Germany, from Germans. Instead, it seems like we get a tourist’s point of view. Making it so, if they didn’t mention the Berlin wall and a handful of people speaking German, you’d think the film was set anywhere in Europe.

Currently Available on Netflix | Get From Amazon

The main issue with Berlin, I Love You is that it is more about the outsiders who have come to love Berlin as their home or a place to visit. It rarely deals with those who actually are from there and, for those who do, they seem to question why people would love Berlin. If not have stories which makes it where they don’t seem to love Berlin but don’t feel like making an effort to uproot themselves.

Thus leading to why Berlin, I Love You gets a mixed label: It isn’t a love letter. At best, the film is an expensive tourism advertisement. One which has wonderful stories of how foreigners find Berlin as their second, or new, home, if not a wonderful place to visit. At worse, it is a collection of shorts which barely have the city be any real focus and more so is about the characters, what they are going through, and all of that just so happens to be in various parts of Berlin.

There isn’t One Unlikable Story In The Bunch - 90%

Hardly Any Give A Sense Of Closure - 70%