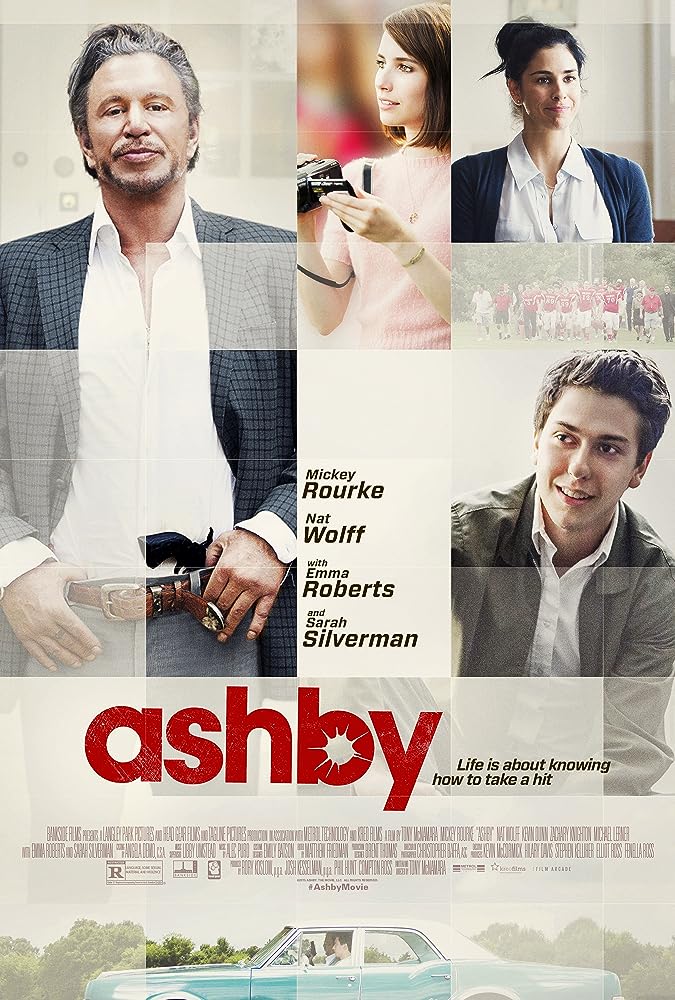 Ashby is the type of film which sadly focuses on the wrong character. For while Mickey Rourke presents the type of character which could have been groundbreaking, he is stuck playing a father figure to a pretentious kid.

Ed (Nat Wolff) us a 17-year-old kid of divorced parents who has recently moved to a football heavy town. He is pretentious in the worse ways possible, but because he thinks being on the football team may win his father’s attention, he tries out and does well. All the while, his mother June (Sarah Silverman) struggles with dating, and Ed struggles a bit trying to woo and keep the interest of the equally, if not more pretentious, Eloise (Emma Roberts).

But then comes Ashby (Mickey Rourke). Someone who is former CIA, with only a few months to live, and no family. A 12 years separated soldier who encounters this pretentious kid named Ed after he knocks on his door for a school project. Leading to them building an odd father/ son relationship, which pushes them both into realizations. For Ed, it is that his father sucks and that he needs to accept that and that being a pacifist is no way to live life. As for Ashby? Well, he has to accept that he may not have always murdered those who deserved it and he may have been just a tool for other men’s benefit. An issue which is haunting for someone who badly wants to get into heaven to see his family once more.

Really, the only thing worth noting here is Ashby. The character seems like he should have had his own film, the type you’d expect Denzel Washington to have, in which it is about his years in service, his daughter’s death, decades of loneliness, and him trying to set things right knowing he doesn’t have a whole lot of time left to redeem himself. To me, that would have been such a better direction for this movie, especially because Rourke, even when the man smiles, looks like he has been through hell and back and is just happy to be here.

Though her role isn’t big, I must admit I am increasingly loving Silverman in movies like this. She brings enough of her comedic side to make her character sort of awkward, but then she brings this weird, I guess, darkness which grounds them. Like, the way June handles being caught giving a guy a blowjob, or talking about how she is a woman who likes sex, is quite funny. However, at the same time she is a mom who knows her ex ain’t worth a damn, and yet her son so badly wants him approval. Which she knows the boy won’t get, but she doesn’t have it in her to say that just as he abandoned and left her, he pretty much left his son behind too.

I found it so weird how Eloise’s dad just let his daughter use his MRI machine on damn near anyone, and how she would not remove all metal, and other objects I’m pretty sure can’t be near an MRI machine, when doing procedures.

As a 20 something-year-old, I both love and hate how Ed and Eloise are written. I like the fact they seem smart and knowledgeable, with interest outside of modern pop culture, but I hate how pretentious and “other” they are made in the process. For it really took me the whole movie to grow to like the two of them, and I think their relationship was the driving force which finally got me to change my perception of these two. Alongside Ashby hitting Ed a few times and Eloise getting made fun of.

While it is good every major character had a backstory, I must admit there came a point where I felt like everyone had a sob story to quickly snag you or to make them seem less like an ass. I mean, with Ashby it worked, hook line and sinker. However, with Eloise just throwing out there her mom is dead, and dad is rarely home, I felt that was a ploy so you felt sorry for the child. This is, as opposed to Ed, who at least when they tried to make you feel bad for the boy, they at least developed it with us seeing his dad, listening to false promises, and then watching as his dad just didn’t show up.

This is the type of film which gets better with time but tries your patience so hard when it begins. For at least half of the movie, Rourke is perhaps the sole thing that may get you through it and hopes June’s struggles with being single and dating may come stronger into play. But once Ed becomes less of a pest, and get reality knocked into him, he becomes tolerable, and then even likable as Ashby rubs off on him. But, no matter how good things become over time when it comes to Ed, it is hard to not shake off the idea that Ashby should have been the lead and this film should have been about him, with perhaps his road to redemption just featuring Ed as someone he could have been there for since he couldn’t for his own kid.