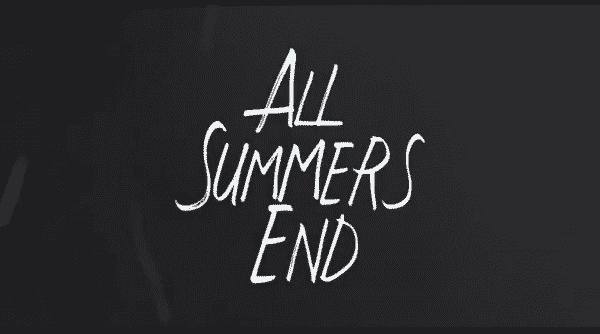 All Summers End is the quintessential summer movie featuring a young love that fills your stomach with butterflies but is bittersweet.

In a year before cell phones, it’s the summertime and 16-year-old Conrad is just hanging out with his friends Timmy and Hunter getting into mischief. Yet, one day, while just having some alone time on a bridge, this girl name Grace walks up to him and they chat a bit. Leading to, before she leaves, her talking about how he’ll be her first love before she leaves.

Something that throws him off but, with him at that age where he and his friends tease each other about what they have or haven’t done with girls, he takes this very forward statement and goes with it. Leading to him hanging out with her and meeting her family, including her brother Eric. Someone who embarrasses Grace to the point of storming off and Conrad feeling the pressure to follow. Which leads to them talking and nearly kissing until Hunter and Timmy pull up on their bikes.

This leads to them teasing Conrad and Grace and Grace pretty much telling them off. But, taking note she can’t take up his whole day, she is cool with him hanging out with them rather than going to see the fireworks with her and her family. Leading to one terrible night. A night where Hunter borrows his grandpa’s truck and it is decided to steal gnomes, among other things, throughout the night. Which leads to Conrad being teased about Grace and to prove he isn’t whipped or anything like that, he has them drive to Grace’s house and steal a plant from the porch.

Which, with Hunter being a douche, he decides to beep the horn and no sooner than Conrad is halfway down the stairs does Eric spot them and chases them – in his car. A chase that eventually becomes fatal for while Conrad and his friends successfully swerve around a deer, Eric doesn’t make it and hits a tree, dying the same night.

Leaving us to wonder, considering how good things are going, how will Conrad handle being a factor in Eric’s death? Much less, what will happen to the relationship he has with Hunter and Timmy? We see in the beginning that adult Conrad has a son, but is it Grace’s? Well, you gotta watch to find out.

Grace Taking Initiative In The Relationship

Whether it is just the type of young adult romances I watch or the sub-genre in general, usually the guy leads and when the girl takes the lead it is a manic pixie dream girl. Yet, Grace isn’t that. She is an everyday girl who has the capabilities to be open, dare I say bold, yet is still a little shy and awkward. I mean, when she just met Conrad she confesses that she thinks he could be her first love. Which, I don’t know if it was the statement or how Dever delivered the line but that was an instant hook for me.

And then how she follows that up with him coming to lunch with her family, how she talks to him after Eric dies and cleans blood off of Conrad, due to something that happens. It is just one adorable moment after another and while I’m sure some may find it cheesy, others will likely put those moments on a pedestal as stuff which, if it doesn’t happen for them, the relationship is trash.

Making it where you fear what will happen if Grace ever learns the truth. To the point you kind of wish Conrad keeps his mouth shut, and his friends too.

The Eric Factor Was So Frustrating

That dark cloud hanging over Grace and Conrad gave me as much anxiety as you can realistically have over a fictional couple. Because, as much as you realize there has to be some kind of conflict, you know if Conrad told the truth it would be over instantly – no question.

And the main reason this is being noted as a criticism is for two reasons. First and foremost, it sucks how death is such a consistent part of media as a means of being a climax. I get it is a life-changing thing and drastically can alter any situation but surely there are other things which can be used which don’t feel so quick, easy, and lazy.

The second reason is simply because there is this vibe that between Conrad or Hunter, you know someone is going to say something. Though there is this hope neither will, it almost seems destined that one is going to confess and then it’ll be over. For can you really imagine Conrad holding in he is part of the reason Grace’s brother died and her family is falling apart? Much less, taking note of how Hunter is, him staying quiet rather than spiting Conrad for being happy while he is miserable?

How Quickly Conrad, Hunter, and Timmy’s Relationship Went Up In Smoke

Assumingly, Conrad, Hunter, and Timmy were friends for a long time so, taking note how once Grace comes about, and Eric dies, they pretty much disappear, that was strange to me. Granted, the events around Eric’s death surely would make the friendship difficult to maintain, and considering what Hunter does thereafter. However, what about Timmy? How come Timmy basically goes *poof* and doesn’t get to see Conrad anymore or they don’t reconcile with time?

Considering how much of a whirlwind Conrad and Grace’s relationship was, it seemed kind of surprising she never wanted to meet his mom. After all, he met her folks and they approved, and she saw that as a “point” in his favor. So, with that in mind, why wouldn’t she want his mom to approve of her as well?

I wish this was a Netflix offering so it could get the attention it deserves. Because, with the way VoD releases are, if it isn’t on Netflix or has a big name in it, it is like a bargain bin release. But this, by far, does not deserve to be something passed over or forgotten about. Which, I admit, could be just the high from watching this talking, but consistently if you watch Kaitlyn Dever movies, especially when she has a love interest, you get this sense of young love which is hard to find. Primarily in the sense of it being real, awkward, yet a bit universal. At least in the sense of something, even if you aren’t as young or young in general, you can have something similar. For the way she plays off another actor just bring about this idea she really needs to find a YA novel to be in, hopefully, a good one.

But, gushing over Dever aside, the reason this is labeled positive is because it brings about hope, excitement, and even some anxiety over whether this couple will last or not. For while all hope seems to be lost, there is this twisted desire for everyone to keep their mouth shut so you can see the ideal ending. A feeling that I can’t think of having for many other movies and the more I watch, the more I find a need to highlight films which try to do something different, or make you feel conflicted as All Summers End does.