Wherever I Look
Recaps, Reviews, and So Much More
Home Movies According To Her (2016) – Summary, Review (with Spoilers)
Movies

According To Her, with its soaring score and the performance of Irina Abraham, finds a way to make a gloomy drama difficult to turn away from

According To Her Plot Summary & Review

Formerly, Veronica was a famous pianist who from her home country of Russia to England was renowned for her technique. However, upon meeting her French husband Paul, and having a child with him, Keoshka, her life was forever changed. Said change most only see in her become a mother. However, it goes deeper than that, and throughout the film, Veronica struggles to be understood and try to explain why she gave up her career to raise a child. Which her husband dares not try to translate amongst his snobby French friends, be it his cousin Adele or childhood sweetheart Amanda. Thus Veronica becomes isolated and with only a child and a mother thousands of miles away to give her any sense she made the right choice.

How The Score Plays A Role In The Film With Veronica being a trained pianist, in the few moments she has alone, her white noise is classical music. But, rather than the score just be ambiance in the background, it represents a racing of thoughts and possibilities, highlights Veronica’s loneliness, in speaks in words more than she could ever in English or her native tongue.

I’d even say there are moments you almost expect her to break into dance, ballet style, to further exhibit the howling in her soul crying out for a connection.

Understanding Veronica’s Reason For Wanting To Focus On Keoshka

Whether it is Paul, Adele, or Amanda, nearly everyone questions or pushes Veronica to rejoin the workforce. Sometimes there is some semblance of kindness, but more often than not, there is an antagonizing tone. One that pushes the idea that to focus on motherhood alone is shameful, lazy, or a waste if you have anything else beyond your time to a child to give. Yet, what we see in Veronica’s interactions with Keoshka that she gets nowhere else is a sense, a feeling of passion.

Which is one of the major reasons why she no longer plays piano or, rather, is fearful of trying to get back into it as a career. Her playing previously was purely technique, doing what was taught and aiming for precision. There was no fun, no artistry, just a constant aim for perfection. But with this child, there is play, whimsy, and her attachment to him is because said feelings are something formerly foreign.

Not to imply Veronica and her mother have a terrible relationship. It’s just, Veronica left her life behind to be with Paul, and he has put the onus on her to fit in. With Keoshka, she only has to be there, be mom, and that is one of the few things which creates a real sense of home.

You Can Imagine This As A Mini-Series

Which leads us to talking about Paul and how strange the man is. For one, it is hard to grasp what led to him and Veronica getting this far. While she loves and adores him, there isn’t necessarily an air of indifference but this sense that he is with her out of convenience. Perhaps for show. But, unfortunately, Paul sets the tone for most of the relationships. All of which drive this intense empathy for Veronica since, as much as she loves her son, once she finds herself able to pull herself from him,  she does want the company of adults. However, her pickings are slim. 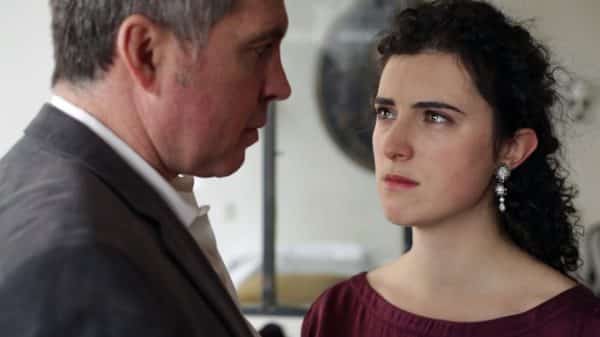 Adele, she finds Veronica to be weird, simple perhaps, and with her not raising her son, Veronica being so attentive to Keoshka brings on a sense of guilt. Then with Amanda, while complimentary at first, things devolve to the point you’ll feel like this film could have been expanded into a mini-series. One which explores how each woman deals with balancing a career, a man, and the pursuit of family. All the while each are unsure of their decisions no matter how fulfilling, either in a moment, or for an extended period of time, they feel. For they always look over their shoulder at someone who has what they want.

Not to harp on a line mentioned in the previous topic, but there really is a struggle to understand what was the initial attraction, what developed into marriage, never mind led to them having a child together? And with how intense your love for Veronica becomes, it makes not having an answer to why she chose him not just infuriating but a tad distracting. For with every cut of the tongue between him and his associates, as well as him just being messy at times, you might be in such a rage you may want to punch something for a cathartic release.

According To Her Overall: Positive (Worth Seeing) – Recommended

This is the kind of film that, once the credits hit, you have to let out a deep sigh. Even if you haven’t gone through the isolation and disregard Veronica has, Abraham takes you places that makes you get tense in the shoulders. And while the score does provide some relief, it is but for a moment. Since, no sooner do you get to breathe do you realize Veronica is processing the feeling of guilt and insecurities that these people have triggered. Leading to why this is being labeled positive and recommended. While we are not a voting member of any awards body, Abraham gives you the kind of performance which should be noted and what Artus has her go through strikes the perfect balance of what it means to be human in the best and worst ways. On the one hand, there is connecting deeply with another person and experiencing a love that is without stipulations. Yet, there is also that loneliness, fear, and the need to question how much of how you feel is directly your fault and how much is it those you are surrounded with.

The combination creates a stirring film that nearly makes you feel like an actor since it brings you so profoundly into Veronica’s world. One you’ll wish you’d got to see more of, including her agitators. For as much as you’ll wish Veronica would yell, scream, hit, or just present a good snide comment, there are moments when you realize she isn’t the only one in pain and maybe she doesn’t want them to feel the same level of despair.

Understanding Veronica’s Reason For Wanting To Focus On Keoshka - 90%

Thank you for this amazing review! I am so impressed at how well you understood this film which doesn’t have an easy theme. This gives me courage and hope. Thank you!