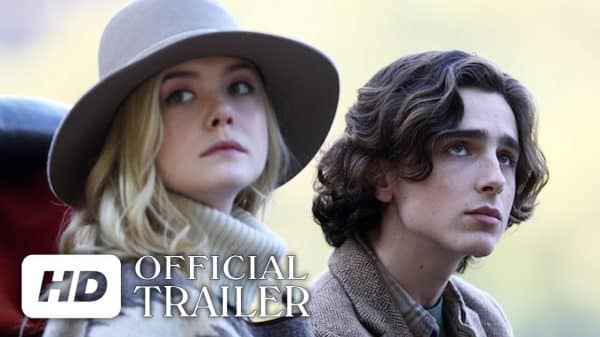 It really is a shame A Rainy Day In New York will struggle to find distribution in the US. For while not Allen’s best work, it is still entertaining.

Gatsby, a well-off 20 something whose privilege allows him to be a dilettante of sorts, decides to join his girlfriend Ashleigh as she heads to Manhattan to interview Roland Pollard. Someone who is a prolific director mostly for his work being non-commercial yet moving. But, no sooner than the two arrive and Ashleigh is off to do their interview, Gatsby finds himself alone in New York and retracing his old stomping grounds and seeing familiar faces. All while Ashleigh finds herself hopping from one tortured, philandering man after another.

Real-life is fine for people who can’t do any better.
— Chan

As anyone familiar, or a fan, of Selena Gomez may know, there is this dichotomy when it comes to her persona. There is this empowered, role model figure, who we often see smiling as ingrained in her from being a child star. Yet, there is also this young woman who has been picked apart publicly, has health issues, multiple public relationships that haven’t necessarily left her in the best place, and this creates a far more complicated person than given credit.

But, if you’ve seen the films she has done which aren’t comedies, you get to see the whole human being. Making her role as Chan (I know that name is ridiculous, right?) a step in the right direction. Which isn’t to imply her past characters were terrible. Surprisingly, she has been consistent in picking quality roles for herself.

However, as Chan, the little sister to Gatsby’s ex, there is something natural there. You don’t get this young girl trying to show she is a woman or a woman seeking to remind you of her youth. She is a person who runs into an acquaintance she has heard a lot about. Someone who has this air of mystery, this generic tortured soul vibe who name drops authors and consistently seems like he’d walk in front of a train to join the 27 club.

Yet, despite how Gatsby can overpower her, in writing anyway, Gomez matches him. For while we don’t hear much about her, beyond her interest in fashion, you want to learn more. She draws you in and somehow, despite so little said about her, Gomez makes it so you don’t look at Allen and see him as leaving her underdeveloped. If anything, it further pushes you into understanding how much Gatsby is for the superficial and is unable to commit to anything real.

The Conversation Around Being Commercial vs. True To Oneself

There is a conversation in the film, between Chan and Gatsby, about their takes on romance, for many of their conversations revolve around what Gatsby did with Chan’s older sister or him talking about Ashleigh. Eventually, Chan is able to divert him to speaking about romance and movies, and so comes the topic of pursuing a commercial version of something and being true to oneself.

This was a notable conversation, amongst the many which were hyperbole, for it felt real. It is perhaps the one scene of the entire film, that feels like it says something. It speaks upon the issue as a creative to want to make money yet not have to kill certain wants and ideas in the process. To make something not for controversy but expression.

And when you think of the entertainment industry as it is, between mergers, remakes, lack of support for new faces and voices, alongside the shifting culture the industry has to reckon with, it stimulates thought. Not just in terms of what Allen was thinking, or the actors as they did the scene, but as a whole, how much does one present their most commercial self, their representative, if you will, vs. being true to oneself.

Also, if one was honest and real, would that make them like Roland Pollard – successful but miserable, or like Gatsby’s mother, who may have her air and graces, but is traumatized by what it took to achieve that?

So, to keep this from becoming a rambling exposition, I’d say to understand the film, and truly enjoy it, you have to take particular note of that scene.

Here is the thing about Ashleigh: Elle Fanning plays this girl from Arizona enamored by New York and Hollywood elite well. It is just, as you question what the men she associates will do too, with, or around her, it makes you fear the worst. Especially since Ashleigh makes it clear that she has many tells for when aroused or interested, and yet is happily drinking what she is given, smokes, and seems game to cheat on Gatsby for a story.

There is something about auteurs like Allen, especially if they are from New York, which makes it so the city seems less big and more like a small town. If not some isolated place that has its own language, culture, and distinct people. This, in many ways, speaks highly of Allen and how he is able to make New York more than an overcrowded place filled with those who moved there on a dream and then faced the hard reality of the cost of making said dream a reality.

But, as much as you have to appreciate Allen supporting the kind of New York only those who live there can find and know, there remains this vibe that if New York wasn’t one of the most famous cities, the microcosm he makes would have the city feel skin to a town in the Midwest. Not Chicago or any of New York’s sister cities, but the places you never heard of unless you have family, friends, or some degree of separation connecting you.

For as much as Allen’s dialog maintains his lead sounding like they are going to have an anxiety attack, or are merely manic, there remains this “other” vibe. The kind that makes it so, yes, you are getting a taste of New York but if you have never been embedded, you aren’t supposed to get it. That if you aren’t well-read, aren’t privileged, or in pursuit of such things, you aren’t looked down upon but are certainly made to feel that it isn’t that people like Gatsby are far from the norm but you are.

Further pushing that idea between being commercial and approachable vs. true to oneself, even if the names dropped are foreign and aren’t talked about in any sort of matter to create real interest.

In many ways, yes. The dialog is very Woody Allen, the lead character is basically him living vicariously through someone else, and the women are written in such a way where they are met through the lead’s eyes and are developed, usually, by challenging initial expectations.

By no means is this a classic or one of Allen’s best pieces of work. Outside of the one conversation between Chan and Gatsby, the rest is entertaining but doesn’t drive repeated viewing.

Is A Rainy Day In New York something you must go out of your way to find? No. It is one of those films where fans of Allen will say it isn’t his best work, but certainly better than what else is out there right now.

Gatsby, a well-off 20 something whose privilege allows him to be a dilettante of sorts, decides to join his girlfriend Ashleigh as she heads to Manhattan to interview Roland Pollard. Someone who is a prolific director mostly for his work being non-commercial yet moving. But, no sooner than the two arrive and Ashleigh is off to do their interview, Gatsby finds himself alone in New York and retracing his old stomping grounds and seeing familiar faces. All while Ashleigh finds herself hopping from one tortured, philandering man in the entertainment industry after another.

Taking it further, Ashleigh ends up enchanting Roland Pollard, learning about his writing partner, Ted, not only having affairs, but his wife cheating on him, and she cheats on Gatsby with a man named Francisco. Someone who had intentions of having sex with Ashleigh, and while intoxicated it seemed she gave consent, but then his girlfriend showed up – forcing Ashleigh to walk back to the hotel room Gatsby paid for while wearing nothing but flats, a trench coat, and underwear that could also work as a bikini.

As all that happens, Gatsby is wandering about, trying to avoid his parents, while trying to get in contact with Ashleigh as she completely upends all his plans. Leading to him running into Chan as one of their mutual acquaintances is shooting an indie movie. And with them doing a kissing scene, and running into each other twice within 24 hours, Chan goes from little sister of Gatsby’s ex to his new girlfriend after dumping Ashleigh and sending her off back to Yardley, the school they met at, him dropping out of college, after transferring to Yardley, and committing himself to New York.

Why? Well, between missing the sound of taxis, Chan, and his mom revealing she used to be a sex worker and said money is how his father started their business, it is the most real his mom has ever been with him. And with that said, this sudden growth in their relationship is hard to give up.

Technically we could explore Gatsby and Chan’s relationship, but Woody Allen isn’t much for sequels. Also, this movie wasn’t that strong, so imagine another one focused on Gatsby? Even if it leads up to his brother maybe dumping his fiancée and no longer being the golden child.

The Conversation Around Being Commercial vs. True To Oneself - 90%