In Inventing Anna, a journalist with a lot to prove investigates the case of Anna Delvey, the Instagram-legendary German heiress who stole the hearts of New York’s social scene – and stole their money as well.  But is Anna New York’s biggest con woman or is she simply the new portrait of the American dream? Anna and the reporter form a dark funny love-hate bond as Anna awaits trial and our reporter fights the clock to answer the biggest question in NYC: who is Anna Delvey?  The series is inspired by the New York Magazine article “How Anna Delvey Tricked New York’s Party People” by Jessica Pressler, who also serves as a producer.

Anna’s lawyer is a fast-talking family man with working class-roots. Given the high-profile nature of the case and his need to earn the respect of his legal peers, Todd needs Anna just as much as she needs him.

Supportive with a dry sense of humor, Vivian’s husband Jack is in sync with his wife in ways that make them lovable even when they annoy each other.  But Jack finds it harder and harder to be in sync with Vivian as she grows more in danger of succumbing to her obsession with Anna.

Maud climbed to the top of her field alone as the only woman in the room. But now she’s sidelined because the idiots who run the magazine aren’t old enough to remember what a brilliant journalist she is. Maud’s sharp, funny, and often too blunt but her helpful, honest nature makes up for that.

Smarter than you, kinder than most, Lou is the unofficial king of Scriberia —  the group of writers at the magazine deemed too old and out of touch to do “real work” and yet  too esteemed to fire. Lou’s personal life is a mess but his awards keep him warm.

A war correspondent with no war to cover, Barry is a Scriberian by choice – he’d rather wither than cover pop culture.  Sarcastic, charming, with a dark sense of humor and sharp tongue, Barry has no problem saying what no one else is willing to say.

A reporter working to salvage her career with just the right story. The Anna Delvey story is her golden ticket – she is willing to face any problem to get it.  But as she works on the Anna story, there is one problem she never expected – Anna herself. The more Vivian pursues the truth about Anna, the more attached to Anna she becomes. 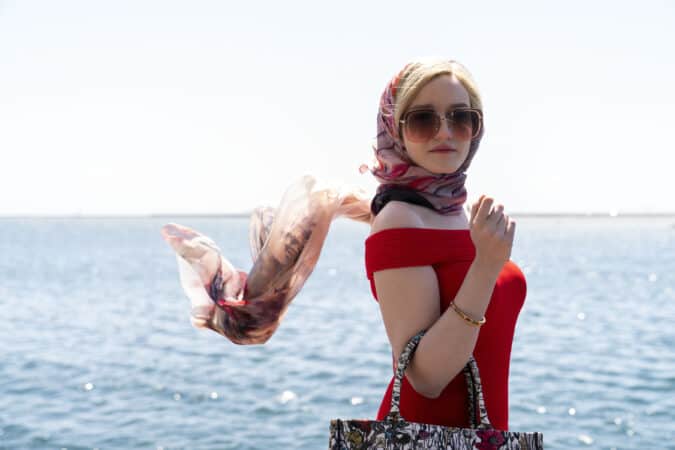 A young woman in her mid-20s with a hard-to-place European accent who takes New York by storm.  Either a brilliant businesswoman or a scammer extraordinaire, Anna, in turn, inspires loyalty, compassion, contempt, and obsession – all while leaving behind an emotional body count.

Rachel is a natural born follower and her blind worship of Anna almost destroys her job,  her credit and her life. But while her relationship with Anna is her greatest regret, the woman she becomes because of Anna may be Anna’s greatest creation.

As a celebrity trainer and life coach, Kacy gets sucked into the Anna whirlwind but is mature and centered enough to stay out of any real trouble. When she least expects it, in the wake of Anna’s crimes, Kacy finds herself becoming a coach to more than just Anna.

An aspiring filmmaker working as a hotel concierge, Neff knows New York and its people.  Neff’s all style, all substance — more complex than most. She’s drawn in by Anna’s charm, but while passionate and loyal, she’s nobody’s fool.