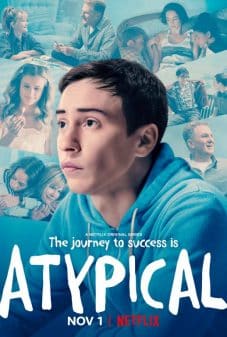 Atypical is finally coming back, and with Sam in college, it means new challenges but also new triumphs!

Atypical is a coming of age story that follows Sam (played by Keir Gilchrist), a 19-year-old on the autism spectrum as he searches for love and independence. While Sam is on his funny and emotional journey of self-discovery, the rest of his family must grapple with change in their own lives as they all struggle with the ongoing central theme of the series: what does it really mean to be normal? In season three, Sam starts his first year of college and is faced with the challenge of figuring out what success means for him, while adjusting to the changes that come with growing up. Jennifer Jason Leigh stars as his mother, Elsa, who continues her own journey of self-discovery as her children grow older and more independent, Michael Rapaport plays his father, Doug, and Brigette Lundy-Paine plays Sam’s sister, Casey. Recurring this season are Sara Gilbert as Sam’s new Ethics professor, and Eric McCormack as his art professor.

While The Good Doctor deserves praises for what it does, with Shaun having savant syndrome, as much as he is a representative for people with autism, at the same time he is a subset that is very niche. Sam, on the other hand, is more identifiable, and his story is something more easy to connect with. Plus, alongside Atypical showcasing Sam, there is an edutainment factor through Elsa and his family.

A family that, admittedly, are a bit hit and miss story-wise. Doug and Elsa’s relationship is at the point where, reflecting on it a year later, and with watching the trailer, you almost want to be over so they can move on. But, when it comes to Casey, whether we are talking about her discovery of being capable of loving a girl romantically, yet also having this awesome boyfriend in Evan, there is the kind of representation of bi, pan, or simply open, sexuality that isn’t tapped into heavily.

Though, even outside of Sam’s family, we have Zahid, who is still a major asset to the show, and with seeing Sam and Paige kiss in the trailer, maybe their relationship has fully recovered? Especially after Sam delivering her speech and noting he believes he is in love with her. Which could make these two relationships what Sam needs for the way Denton is presented, and Sam noting the struggles people on the autism spectrum have with graduating on time, he may need to learn on them to stay sane and encouraged.

With that said, here is hoping Zahid gets some much needed development.