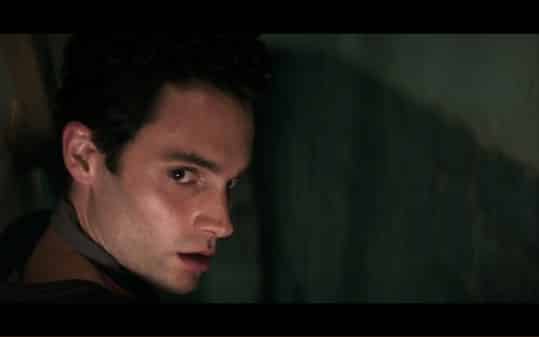 As we get a hint of Joe’s ex, he also has to deal with Beck not being a one-dimensional person and not who he thought she was.

We Understand Each Other Paco: Mr. Mooney, Joe, Paco, Ron

There may have been a need to question why someone like Joe, who seems to have a very selective taste in who he interacts with, has taken to Paco so much. After all, while an avid reader, he comes attached to Ron. Someone who doesn’t trust Joe and has threatened to fight him. Yet, despite all the troubles which could come from someone like Ron insinuating something, he sticks by the kid. Seemingly has taken on an unofficial big brother role.

Why? Well, because Mr. Mooney, who increasingly seems like an adopted parent, used to beat Joe. In fact, as Benji is locked up in the basement, it seems Mr. Mooney would lock up Joe. At least one time when he disrespected The Wizard of Oz franchise by only knowing the first book. 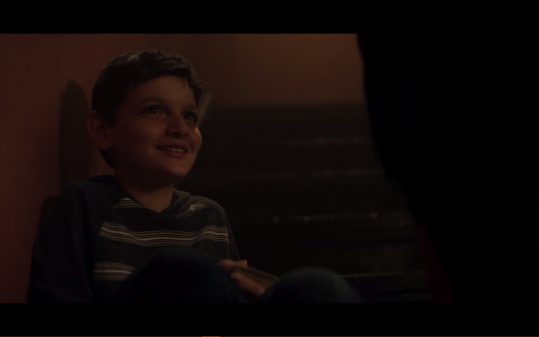 So is/was Mr. Mooney Joe’s biological dad, stepdad, or adopted father? Could it be Joe was homeless but Mr. Mooney had his moments – both of kindness and insanity? It’s kind of weird how this show crafts Joe to be this damaged dude, who clearly has a sweet side, but even at his worse, he never loses his humanity. Making you wonder if something may happen to Paco. For, at this point, it seems like Paco is Joe’s inner child, his innocence, and perhaps helping Paco is what helps bring Joe back.

Thus pushing the idea Joe will probably do something to Ron eventually. All Paco needs is a black eye or to not be seen for a few days. With that, Joe will be out of a window or breaking in with extreme prejudice.

Benji has a theory. One in which Beck is a bit of a gold digger, if not social climber. Maybe of the ilk Joe is, in terms of making calculated moves to get someone like Peach, but maybe not so smart she can hold onto someone like Benji. It’s just a theory, not a fact. However, the thought does poison Joe’s mind and with him being invited to a party of Peach’s, all that Benji says seems true.

That is, until Joe and Beck are alone, and she doesn’t seem to have used Joe to not come alone. Also, I should note, humor whoever Peach seems to want her to be with, if she can’t have Beck. And in their time alone, Peach makes it seem she got sucked into this world of Peach’s and tried to adapt, seem one with the life of this taken care of young women but can’t keep up. Financially she can’t and in terms of interests? Yes, they share a love of beautiful things but Beck wants more out of conversations she has. Hence Joe.

Someone who seemingly is but a friend but that’s only until he comes through after Professor Leahy makes a move on Beck. With him talking about baring her teeth, and it working out, it seems he gets to be seen as more than a friend. However, the entire journey from guy from the bookstore to potential boyfriend isn’t completely smooth. Maddie, a friend of Candice, Joe’s ex, is at Peach’s party and she brings up Candice mysteriously disappearing. Also, Peach asks probing questions as well. Making it seem Beck may have been an easy win but people in her life, those who have only a few degrees of separation, they might be a problem.

So is Peach into Beck or do I just not understand the intimacy women can have with one another without something being up? Or could it just be that, similar to how Benji has painted Beck, and thus influenced how Joe saw Beck, we are being influenced into how we should see Peach? For that’s the thing with narrated shows. It leads you to question if it is all about the lead’s point of view, what they know, and if everything has their fingerprint on it? Making it where, because Joe is jealous of Peach and Beck’s closeness, he paints her as a rival in ways beyond being a friend who complicates things but something more.

As for the Professor Leahy situation, with that in mind, it makes me wonder if Beck is the type who is easily influenced. Take note of how she tries to keep up with Peach and her crew, then her doing something which seems very Joe. It really makes you wonder who is Beck when these people aren’t around.

Trust Is Hard To Earn & Easy To Lose: Benji, Joe

With Benji remembering Joe from the cab, there comes the serious question of what to do with him? Joe doesn’t see himself as a killer, much less the judge, jury, and executioner type, but letting him go would be stupid. Lest we forget, even if Joe doesn’t read a bunch of law books, he has read enough fiction, maybe non-fiction to know what happens if you let someone like Benji go. Even with some hazing video which is supposed to create some form of mutually assured destruction.

So, being that Joe isn’t a killer, in the traditional sense, as in beating Benji to death, he decides to just use his nut allergy. Thanks to two spoonful doses of peanut oil, Benji is dead and with Joe making it seem he wasn’t in NYC at the time, on drug binges as well, it seems all he has to do is plant the body somewhere. Which could be hard, thanks to having to get Benji out the basement, but with Benji’s cell phone unlocked, it might just require contacting the right people for a proper setup.

With Maddie talking about Candice last being in Rome, so comes the question if Joe killed her? Throughout the episode he talks about being too aggressive with her, so there is a need to ask if being aggressive, considering stalking for him is holding back, meant him getting physical? Also, where is she now? Be it living or dead?

Especially since Benji may not be a big dude but getting him out of that basement won’t be easy. For it isn’t just getting rid of the body but then cleaning up the cell. The man was dealing with heroin withdraw, likely pissing, and defecating in that cell. Joe has to clean all of that up and still open the store. While also beating Ethan for with a Stephen King book coming out, causing them a boost in sales, it means Ethan may need to access the basement for more books or storage purposes.

So taking note of the drugs, Benji’s stuff, and everything Joe has to get rid of, will he be able to get away with this? Also, will this weigh on his conscience at all?