As Emma hunkers down and starts working on the books, Eddy has a breakthrough with the girls and Lyn? Well, she deals with Karla.

Mari’s home life is a bit of a wreck. More and more families are being forced out, Johnny is using the house as a cover for him sleeping with Lyn and their dad won’t say anything about it. Just for Mari to mind her business basically. So when it comes to her activism, that is where she finds her power. Perhaps even validation.

Something that, arguably, Tlaloc is ready and willing to manipulate. For he knows she is smitten with him and uses that to get some head. Which kind of comes out of nowhere but what makes matters stranger is Tlaloc deciding to record Mari doing it.

So are men on this show, generally speaking, not going to be s***? Just asking. Johnny, while seriously caught up in Lyn’s web, you have to take note he is a grown dude and has to be held responsible for what he is doing. Then, when it comes to their dad, I get there is a traditional machismo mindset but come on now. Your son is engaged, Karla is pregnant and you say nothing? Is it because he is supporting you or something? I mean, as noted below, Karla isn’t just some rebound. Why be silent?

Oh, and Tlaloc, it’s nice that the creator notes he is supposed to be complicated but he seems more like a manipulative douche using his influence for easy sex right now. You know, an activist by day and taking advantage of this enamored by his passion by night. Granted, he is single so it isn’t like he is cheating and maybe Mari is the only one. However, something about that boy screams player to me.

Lyn and Johnny are still together and with the way Johnny is talking, he might just leave Karla for Lyn. After all, he can be a good father and not be with the mom. It’s a thing. However, after Karla goes to the bar and nearly makes a fool out of herself and seemingly wants to fight Lyn, he comes to the realization he can’t do Karla dirty like that.

She is the one who helped him recover after Lyn dumped Johnny the last time. Also, she hasn’t done the messed up things which have made Johnny’s relationship with Lyn so complicated. There are no games, just love. I mean, because of her, he is in a really good place, mentally, financially, and physically.

So, being the type of guy Johnny is, he breaks things off with Lyn in person and perhaps, finally, gets closure. For now he is the one breaking up and leaving her rather than it being the other way around.

I sort of wonder if this whole Lyn affair was just about getting her out of his system. Because, clearly, while physically he moved on, maybe mentally to a point, emotionally he remained very attached to Lyn in a way which let her intrude and impede his progress in life like it was nothing. So between the sex and conversations, I think the goal might have been to leave things without him feeling like he got left behind for once.

Not to imply the goal here was to be petty and make her feel what he has countless times. More so, he needed to really see and figure out, at this point in his life, with him in a good place, was it him or her that made it so things never worked. And, in the long run, he figured out it was her. So, and this is how I know he wasn’t being petty, he broke up with her in person and did it gently. That way there is no guilt, no calling him an ass****, he can say, despite the cheating and affair, he ultimately did right by both of the women who have such a profound effect on his life.

But, here is hoping we one day see Karla call him out because that’s the closure we need.

Being that Eddy was never properly introduced to the girls, all she has are the people she met through Vida. Such as tenants like Doña Tita who she can have real conversations with. As for the girls? There is still a wall there and with Emma not trusting Eddy and Lyn, at best, trying to play peacemaker, they still haven’t really gotten to know each other. Heck, all things considered, there isn’t really much of an effort to do so.

Which, when in mourning, hurts. The two people who have a grasp on the love you had for someone barely wish to communicate with you. All the while you’re sharing the same living space! On top of the depression you are already going through, imagine how infuriating it is that the two people who would understand your pain have no intention of trying to help you so you can help them move past it.

But, with Emma trying to get the books together, and get fingered and licked, Eddy is the least of her concern. However, she does decide to at least open up a bit to Lyn and come out to her. While making it very clear that while she may give into urges and hasn’t any real shame, she isn’t the dating type really.

Though with homegirl from her past showing there was once something there, that could change. 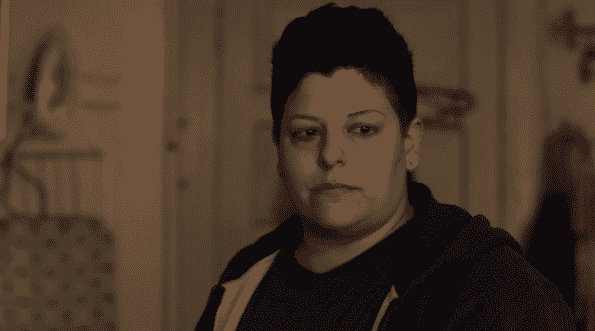 Eddy’s situation is a bit heartbreaking. Though she has Doña Tita in her life to talk to and is cordial with many others, arguably she isn’t close to anybody. Making Lyn, and especially Emma being closed off so depressing. Especially after they ate flan together since that seemed like it could be the beginning of something. Maybe the segue to conversation and talking about themselves. For, lest we forget, Eddy was a secret so she remains a complete stranger. One which Emma doesn’t have a high opinion of and with Lyn wrapped up in her own drama, she doesn’t take much note of her really. Just sees her as a roommate who keeps to herself.

But, hopefully, with Emma overhearing how much Vida wanted to make things right with the bar and with Emma, that might be what gets the engine going. Because there seems to be a family pattern of not talking and keeping things inside and it’ll be up to the girls to break it. For with their dad gone and mom dead, all they have left is Eddy, the bar, and each other. All of which seemingly are on the verge of breaking apart at a moments notice.