The Defiant Ones: Part 4 – Recap/ Review (with Spoilers)

The end of The Defiant Ones brings us the rise of Eminem, more name dropping, then how Beats by Dre became the phenomenon that it is. Thus leaving only how the money from that Apple deal was spent for the ending.

As noted, Jimmy’s story pretty much ends in part 3. Dr. Dre has taken over and Jimmy sort of becomes the mentor behind the scenes. Someone whose loyalty allows Dre to make mistakes and learn from them in a rather safe environment. Which isn’t to say Jimmy didn’t have his own things going. As Dre intensely focused on one artist at a time, Jimmy was doing as he always did – make connections. With the rise of Napster and piracy, eventually came Jimmy getting introduced and befriending the late Steve Jobs. Thus beginning his relationship with Apple. Alongside that, he was still finding talent and revitalizing his roster. Some examples include putting Fergie with The Black Eyed Peas, bringing Timbaland and Nelly Furtado together, as well as bringing Pharrell into Gwen Stefani’s craft. That alongside discovering acts like Lady GaGa.

But it is with the creation of Beats by Dre when you really see Jimmy shine. For he took note of his mentee, Dr. Dre, not being a big endorsement guy. Yet, who in music or anything where you are seen, doesn’t feel the eventual need to branch out? So, seemingly on one random day, there is a conversation about a headphone line. Dre comes up with a name, and Jimmy works with his contacts.

Then, from there, the rest is history. Every Interscope artist has to feature Beats in their videos, Jimmy is working the marketing like you cannot believe, and he seems excited again. He feels challenged again. Then, to top it all off, he not only gets married but makes this huge Apple deal. One which gives him the type of wealth to make his own school with his name on it.

Leaving us with seeing Jimmy’s wedding to his 2nd wife [note]Vicky seemingly divorced him because to marry and stay married to a man like Jimmy is hard and, the way it seems, to be the mistress to his work.[/note]. A soiree which has Oprah, Lady GaGa, P. Diddy, Ellen DeGeneres, and perhaps all the who’s who of music and maybe also entertainment. Not to be seen, but likely because he has touched their lives through, as told by Bruce Springsteen’s manager, putting the ego away and focusing on what makes the artist their best self.

Hard work, initiative, and seizing opportunities. Combine that with white privilege and you see the formula to go from a middle class, maybe working class, kid in Brooklyn to a multi-millionaire. Someone who has the type of money to not just finance schools, but maintain loyalty to someone even when it may not make business sense. To say the least, the Jimmy we are presented, as a business man, music guy, and a person, is truly #Goals. Both in terms of who he was on his way to the top and who he is while there. For while it seems he is just a workaholic, I want to believe he enjoys the fruits of his labor. We may not get to see it a lot because he is private and sort of excludes us from a modern social media-esque voyeurism of his life, but you get the vibe he does. Not just in the homes he has, the money he is notably able to spend, or the fact he has love in his life. The fruit, to me, is in the smile of enjoying what he is doing and though it is frustrating, he knows the reward for facing the challenges will be gratifying.

After Death Row, and at the beginning of Aftermath, life seemed good. Dr. Dre was married, his personal life stable and not as hectic, but music wise he was flopping. However, then one of Jimmy’s interns bring in Eminem’s cassette and so begins the relationship of music’s Tim Burton and Johnny Depp. Though, as always, it wasn’t completely easy at first. 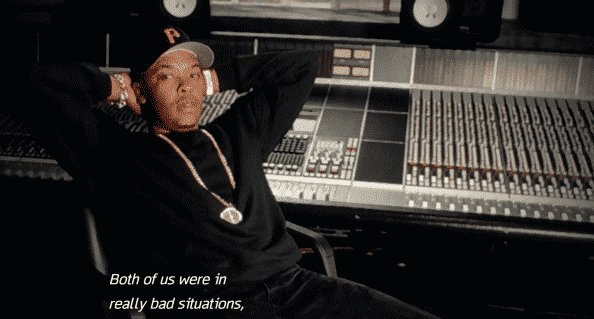 Dr. Dre had to take a few pages out of Jimmy’s book when it came to sticking with and advocating for an artist no one wants. Much less one who is so controversial. Yet, also taking a page from P. Diddy’s book, he marketed him by using his name and presence as a seal of approval. Thus setting Eminem on the path to perhaps be one of the best commercial rappers around.

And then, of course, came 50 Cent, many years later Kendrick Lamar, but no Detox album. But, as noted early on in this series, while Dre had flow, his love was being the engineer, mixer and what not. So at 50 years of age, what is left to say? What hasn’t the world been given or dug up about him? Hence perhaps this documentary. A definitive story, in the words of Dre and those he is closest to, about his trials and tribulations both musically and personally. Which of course includes the Beats deal, but only as a show of how he worked his life and career to the point that became possible.

I almost feel like, as a whole, we are given two different styles of doing a documentary with The Defiant Ones. Jimmy’s is the traditional, it is all about me, what I did, and features nods to who I learned from type. Dr. Dre’s, however, is very much about, this is the community which built me up to the man I am today. Which, cultural wise, seems fitting.

Reason being, Jimmy, in my head, represents that whole “Pull up your bootstraps” version of America. Yet, Dre represents not just that urban hustler spirit, but perhaps the main way, if only, those who are truly in the most neglected parts of America can stop drowning. Especially if no one is putting resources, for the general public, in their community. So, mentorship becomes a real key. Which through every step of Dre’s journey, you can see in Alonzo, Jimmy, or probably even his wife guiding his way. All the while, he does something else very important: He passes it on. Be it how he molded Eazy-E using what he knew or Eminem, you can see how he went beyond the money he could gain and made an investment in these people. Probably through observing and listening to how Jimmy became successful. Then, just adapting it to what he felt capable of.

Thus giving us what may be touted as two men’s stories, but sort of seems like how a village raised a child named Andre Young into the man commonly known as Dr. Dre. With a heavy feature on perhaps the main person, outside of Dre’s mom of course, responsible for that.