The Defiant Ones: Part 3 – Recap/ Review (with Spoilers) At a certain point, Jimmy’s story stops and just merges with Dr. Dre. Thus giving Interscope it’s meteoric rise. Yet, as before, while we hear people praise Jimmy, Dre shares his spotlight with the artist he helped make into legends.

Being at the right place at the right time, sacrificing family for work, and knowing the right people. That is how Jimmy transitioned from a well-known producer to getting the former CEO of Atlantic Records, Doug Morris, to put up half the funding for Interscope. A company which started off by signing one hit wonders like Rico Suave.

Yet, from there, so began Jimmy finding his stars. His version of Atlantic’s Ray Charles, Aretha Franklin, The Rolling Stones, and more. He discovered No Doubt after a 1991 showcase and, after a long battle, and giving them the utmost autonomy, signed Nine Inch Nails. Who, thanks to the ear and eye of lead singer Trent Reznor, who wanted a sub-label, end up bringing Marilyn Manson under the Interscope umbrella. 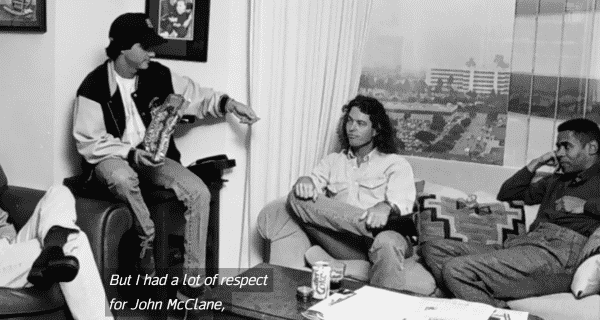 But then comes what connected Dr. Dre to Jimmy. Of which, two things are involved: First, there is John McClane talking up Dr. Dre. Following that is Jimmy’s mentee Suge Knight and Dr. Dre creating the legendary Death Row.

Leading to a very financially successful, but tumultuous decade for Interscope. For between these provocative rock stars to vulgar and violent rap artist, Interscope’s parent company Time Warner became worried about the bad press. Not because they didn’t value the free publicity but because it wasn’t the artists being called out but them. So, with them not having enough of a stake to just undo all of Jimmy’s hard work in one swoop, they do petty nonsense. They push out Jimmy’s partner Doug Morris and then try to buy Suge Knight from right under Jimmy.

Which, despite Jimmy not fitting Italian stereotypes, naturally doesn’t work. I mean, let’s not forget he came from Brooklyn. So, like Suge, who had a similar rulebook, he relied on loyalty. After all, both men understood not biting the hand which feeds you. So when Suge was asked to come to a diner and sit with the man who helped put him on, that is what he did. He gave the runaround to Dionne Warwick, who was hosting the Time Warner rep for the meeting and showed his loyalty over a meal. But, as much as Jimmy seemingly had the upper hand, to a point, he seemingly wasn’t ready for the culture shock. After all, Jimmy came up in a world of rock music. Where drugs and partying were a thing to worry about, but it wasn’t on the level of what Death Row had coming into his life. And, as he says, there came a point where he had to question if he was defending free speech or funding some sort of Hamas like group. For, especially as the East Coast v. West Coast beef was roaring, he felt so endangered that he’d go to public events wearing a bulletproof vest.

However, being a man of conviction, Jimmy and Interscope rode out the troubles of the East Coast v. West Coast beef, the murder of Tupac, and Time Warner trying to destroy his company. Leaving him, as many times before, stronger. Stronger and in a better position to take chances.

I was kind of waiting for the point where Jimmy and Dre’s story merge because, Jimmy has been given the short end of the stick. Like said in the first two parts, his story has mostly been name dropping. He was mentored by this person pictured, worked with this artist, signed this one, and that’s it. In a way, it is like reading a Wikipedia page with videos and pictures. Something where you get enough details to be knowledgeable, but not to fully say you are an expert. Which I attributed to the fact most of the people Jimmy worked with were already established by the time he came in. So, with that, naturally, he can’t have stories like Dre where there is a conversation about how this person was discovered, what Jimmy did for them and etc. Yet with No Doubt, you see that opportunity. And while I’m not a huge fan of them as a group, nor Gwen Stefani, I would have loved the same time and effort put into Snoop Dogg, Tupac, and etc into her rise to fame.

Especially because, unlike Tom Petty, Stevie Nicks and the rest, there is no excuse of things not being photographed or videoed. Granted, it is ’91 and YouTube and all that doesn’t exist, much less everyone having a phone with a camera, but surely we could have gotten more than what we got right? There could have been a real focus on how Interscope grew outside of Death Row. I mean, No Doubt aside, I would have loved to see Marilyn Manson studio sessions, and the other people Jimmy or Trent brought to the label. And then when it comes to the personal side, I’ve come to accept, especially with the way Jimmy’s ex-wife talks, that is pretty non-existent. From Monday to Sunday, even at midnight, Jimmy worked. Supposedly, for a year, he cooped himself into a bathroom to haggle for Nine Inch Nails’ contract. So while we may get to know the business acumen of Jimmy, the actual person is just going to remain a mystery. Possibly because you can’t separate Jimmy the business man from Jimmy, the guy from Brooklyn. We ended at Ruthless and pickup at Death Row. We watch the rise of Snoop Dogg, in detail, see how the Rodney King beating influenced Dre’s music, and see him bottoming out after a DUI. Basically, a lot of what you see in Straight Outta Compton and past documentaries and biopics which cover Death Row. Including the infamous 1995 Source Awards. The only thing sort of unique to this is you get more out of how P. Diddy felt about the East Coast v. West Coast beef, alongside some of Nas’ thoughts. Outside of that, if you have invested any time into learning about the history of Hip-Hop/ Rap in the 90s, you don’t get to hear or see anything new.

Well, outside of seeing Suge, for a good portion of part 3, being portrayed in a kind of positive light. Until the end of course. Then people start clamming up for they don’t want to speak of what happened at Death Row behind closed doors. I’ve really come to the mindset where I think this is Dre’s story featuring Jimmy Iovine’s. So with them now working together, I almost fully expect Jimmy’s own story to pretty much be put to the wayside. Especially since he is established, his life is without much in the way of troubles, and there is the question of what is left for him to give? Him talking about his divorce from Vickie? Maybe how his children dealt with him being a workaholic?

If the previous parts have shown anything it is that Jimmy isn’t going to go there with us. There isn’t going to be a real search for how he felt about this artist or situation, besides whether it was BS or lucrative. Which, again, comparing it to Dr. Dre’s story, I guess is supposed to compensate for how personal Dre’s journey is.

Jimmy’s journey is about the business side and Dre’s about how a boy became a man. Which may not interest everyone involved but ultimately shows you how these two came together. Much less, through networking and mentorship, alongside having a good ear, it allows you to understand how someone like Jimmy Iovine ends up being a mentor to a man like Suge Knight. Much less, becoming like a big brother to a famous rapper and producer and helping him become a multi-millionaire without stepping into a studio.

Fear is a good thing ‘cause it can keep you in check.