A bit dated, and lacking the type of punch you may be expecting, D.L. Hughley: Contrarian has its moments but lacks a reason to be called a classic.

Table of Contents show
1 Summary
2 Highlights
2.1 There Are Interesting Topics & Jokes
3 Criticism
3.1 It’s So Dated & Well Tread
4 On The Fence
4.1 It Could Be I’m Just Not Into Hughley’s Style
5 Overall: Mixed (Stick Around)
6 Follow Wherever I Look on Twitter and Like us on Facebook.
6.1 Check Out Other TV Specials

When it comes to D.L. Hughley: Contrarian, you get the vibe you’re watching a comedy special filmed sometime last year or beyond – with a few recent references to refutre that. For with Hughley talking about Doug Jones being elected, Prince dying, and the tiki torch carrying supremacist of Charlottesville nearly every topic, not dealing with his family, seems dated. Making you wonder if Hughley was shopping this around for a long time and eventually decided to just take what he could get.

But, despite any pop culture/ political topic seeming stale, when he talks about growing up and his family, you get a few chuckles. Not some huge, feels like you got bronchitis, kind of laughter, but you see Hughley throw a few jabs. Be it talking about his relationship with his only son, who he says is only high functioning when he regularly has sex; stories about his momma, and talking about his upbringing; or the occasional reference to his wife. Which hones mostly on what would happen if one of them died. Such as him getting a Puerto Rican woman and going outside the race like Serena.

There Are Interesting Topics & Jokes D.L. Hughley: I don’t know what causes autism, but I know the cure is pussy, goddamn it.

Though none of the topics which actually bring any noteworthiness to the special are developed and really played with, they do make you think a little bit. Be it the idea that if slavery was a choice, Harriet Tubman must have been a travel agent, or pointing out how strange it takes a police officer only 5 months of training compared to 12 months to get a certification to cut hair. As expected from a comedian who came up in the 90s, and is a comedian who is Black and focuses on Black issues, naturally talking about police brutality and being uncomfortable with their presence is a strong focus. However, that is perhaps one of the few statements which don’t sound, especially if you watch a lot of comedy, like something said countless times. 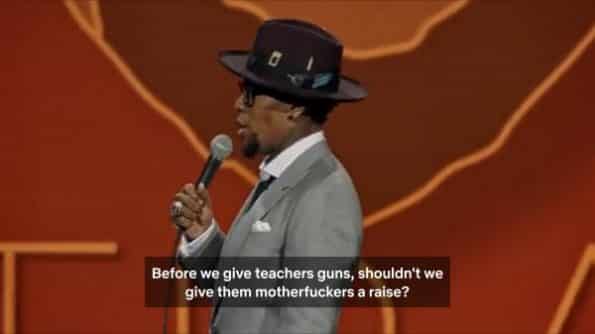 D.L. Hughley: Before we give teachers guns, shouldn’t we give them motherfuckers a raise?

Despite this special, at the earliest, being filmed around May, per the Kanye West “Slavery is a Choice” comment, this special feels quite old. Maybe it is referencing Prince’s death without a story about meeting him, maybe it is because of referring to an event which happened April of 2017? Perhaps it is talking about Stormy Daniels and Trump wanting to kick out Mexicans and keep Muslims from coming into the country? Either way, a lot of the jokes of the special seem like they might have packed more of a punch if released this time last year than now.

For if the joke isn’t dated, then it is something we’ve heard many comedians attack various ways. Most of which better than Hughley did. Making it so, while you have to recognize Hughley’s longevity and hustle, it makes the reference of him being a King of Comedy

seem like something, if it wasn’t a self-given crown, he would have lost the title of due to this special.

It Could Be I’m Just Not Into Hughley’s Style 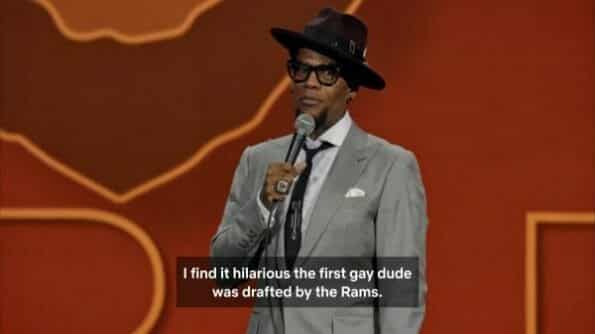 D.L. Hughley: I find it hilarious the first gay dude was drafted by the Rams.

What’s funny is very subjective. Personally, I enjoy vulgar comedy, maybe a bit of slapstick stuff, or someone like Dave Chappelle who gives you a well-plotted story with punch lines throughout. That is, rather than Hughley’s style which is very light on story and seems to be about quantity of topics than really honing in on any particular thing too long. Sometimes feeling like he is mentally running through all the jokes he memorized off of notecards he had.

While it is understood that the person on stage sometimes is musing to themselves, occasionally asking rhetorical questions, with Hughley, it is like touring was easy money, he had some jokes written up, knew people would show up, so he went on the road. And while he does bring up interesting thoughts, it does feel like, despite him becoming quite the commenter with his radio show and in live appearances, when it comes to stand up, he said all he has to say. Making this almost seem like a recap of things that caught his interest over the last few years. Helping you understand why he recalled so many of his jokes repeatedly – for this whole special is about you remembering something that drifted to the archives of your mind.

Hence the mixed label. While you have to respect D.L. Hughley’s career, it is hard to say this special doesn’t just feel like a quick buck. It lacks that memorable joke you’d revisit over and over and doesn’t contain anything you haven’t heard before or joked about better. Even when it comes to having a son with Asperger’s. For while not a whole lot of comedians have that in their repertoire, being that Hughley is one of the types who doesn’t give a damn about offending anyone, they are just making jokes, you are left unsure if the jokes are funny because they are funny or they are funny because of his audacity to say them.

Check Out Other TV Specials