Wherever I Look
Recaps, Reviews, and So Much More
Home TV Series Thirteen Reasons Why (Th1rteen R3asons Why): Season 1/ Episode 8 “Tape 4, Side B” – Overview/ Review (with Spoilers)
TV Series

Thirteen Reasons Why (Th1rteen R3asons Why): Season 1/ Episode 8 “Tape 4, Side B” – Overview/ Review (with Spoilers)

As the show continues, it becomes more difficult to remain loyal to Hannah and demonize the people who contributed to her demise.

With us hearing the tapes and Clay only touching them toward the end of the episode [note]After a long talk with Tony, he decides to continue listening to the tapes.[/note], Ryan does not deal with his wrath. However, we do see Hannah revisit an old outlet, writing in her journal, and even growing close to Ryan. But, unfortunately, as always, the people she allows herself to be vulnerable around leave a deep enough wound to scar. Making it so, more and more, her body gets hard to defend itself from outside forces and provides less and less opportunity to let someone in.

The more we hear how someone took a piece of happiness from Hannah, the more you must wrestle with your feelings. Well, I wrestle with mine. For with this poetry thing, she is introduced to an entire community, mostly of people who could be her mother’s age, yet she hones in on Ryan. She lets him close and when he betrays her, she gives up something she is good at, something she gets praise for.

Often you may see on cruel YouTube and Facebook comments about how wishy-washy and sensitive this generation is. Your response is how much that person is callous and must have had the good life. But going episode to episode of Hannah’s story, it is hard to not feel as Tony [note]Who confirms he is gay[/note] did when it came to her. He notes she is a nice girl, a friend, but she has too much drama.

For, in many ways, while you have to admire her optimism and her attempts to be bold, to look for human connection despite often being met with disappointment, it comes to a point where you wonder why she hasn’t toughen up? Where is her resiliency? Which I know, sounds as callous as those YouTube comments, but it is just weird how she is portrayed as someone often willing to be the victim and not fight. She may ask why, scream down the halls, push people off when they try to sexually assault her, but she doesn’t really change the narrative. 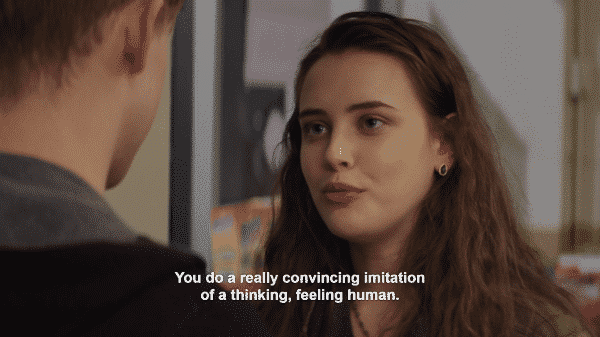 Which led me to wonder why she didn’t keep going to that poetry thing. She kept going to Monet’s despite the disintegration of the FML club and all the bad memories there. I mean, in that place, she found a community, a place where her writing could be heard [note]We learn Hannah’s career goals were to become a writer.[/note] and while Ryan violated that safe space, she would have had all these maternal and paternal figures to help her heal. But, as Tony notes, the girl sadly draws drama into her life without really trying to obtain it. 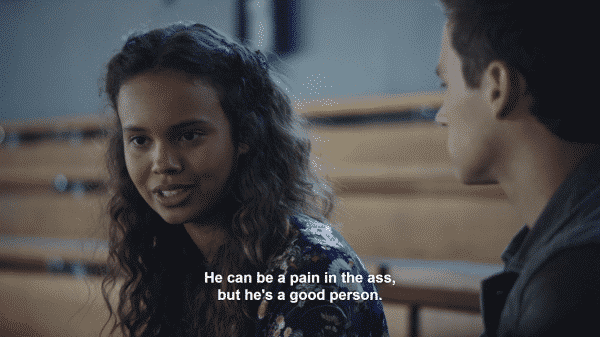 This whole Clay and the tapes matter is starting to wear down on Jessica’s past and present relationship. For Alex, something with his stomach is flaring up thanks to all the stress over this Clay situation and awaiting his punishment. For Justin, it seems the stress maybe causing him erectile dysfunction. Though, what doesn’t help, is that Jessica begins to grow close to Alex again and, because Alex doesn’t like Justin, he jokes about that maybe him and Jessica are getting back together. Thus messing up Justin’s mind for while he has basketball, Jessica is probably the only stable person he has that is capable of showing him consistent love and affection.

While Justin is still someone to be deemed a crazy mofo, especially since he wants to plan out Clay’s death and make it look like a suicide, I feel the constant need to remind myself that boy is broken. Don’t ask me why I paint perhaps the biggest ass of those Hannah blames as a victim but, isn’t that the overall thing this adaptation is trying to do? Isn’t it trying to show up things aren’t so simple on both sides of the story? Be it the person who died or the person who contributed to their reasons for killing themselves?

So with Justin’s home life being horrible, and Clay threatening his ticket out, all because of a rumor Bryce started and Justin didn’t deny, I don’t know dude. While Hannah remains the ultimate victim, fleshing out her tormenters has made it hard to stay by her side and be loyal. Especially as you get to see every side to the story. Something the book consciously didn’t do.

“Everybody wants to talk. No one wants to do anything.”

“Dream big, they say. Shoot for the stars. Then they lock us away for 12 years and tell us where to sit, when to pee, and what to think. […] Then we turn 18 and even though we’ve never had an original thought, we have to make the most important decision of our lives. […] And if you don’t have the money and don’t really have the grades, a lot of the decision gets made for you.”