Thirteen Reasons Why: Season 1/ Episode 6 “Tape 3, Side B” – Overview/ Review (with Spoilers)

More and more we see how often people avoid doing something when they could of and the show leads you to reflect on how many things you just watched, ignored, or avoided just because it would have required effort you weren’t willing to expend.

Table of Contents show
1 Episode Focus: If Only You Stepped Up (Hannah)
1.1 Commentary
2 Subplot 1: The Need To Be Punished (Alex, Jessica, and Justin)
2.1 Commentary
3 Subplot 2: The Secrets We Keep (Tony, Sheri [Ajiona Alexus], and Clay)
3.1 Commentary

Episode Focus: If Only You Stepped Up (Hannah)

The more and more you watch this show, the harder it is to not be frustrated Clay never makes a move. For, if there is one extra reason this show can add for why Clay has his own tape, it is because his inaction kept Hannah experiencing one heartbreak after another. With this episode, it comes in the form of the Dollar Valentine’s and Marcus.

Despite Clay having Hannah at the top of his list, he doesn’t call her. Hell, he doesn’t even follow up on the progress he made after the dance. He takes two steps back and you can see it is frustrating to Hannah that she tries to hint and go 50% or 60% but Clay doesn’t try to, consistently, meet her half way. Plus, in the moments it really matters, he is either silent or doesn’t say what she needs to hear. So with Marcus, there was this hope that maybe, since he took initiative, seemed like a nice guy, and funny, maybe he would be different. However, his wanted the Hannah whose name had been besmirched and who was considered easy. He didn’t want the Hannah who desperately needed a friend and was looking to find a high school sweetheart like her parents did. Nope, he wanted to finger bang her in a diner and have all his friends bear witness. 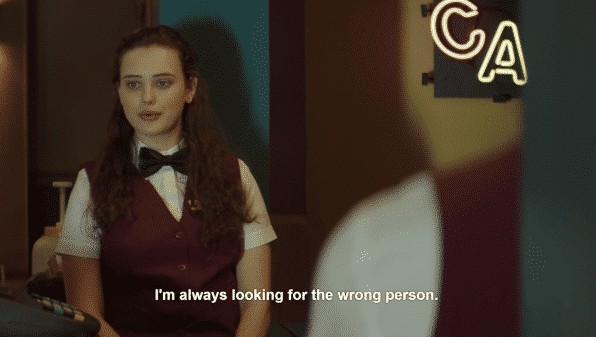 You know, I’ve watched a lot of screwed up films. There is Elle where you constantly watch a woman be raped, there is Wetlands which features a girl grotesquely obsessed with her own bodily fluids and so many others. However, those films I remember because of the actions and not how they made me feel. Which is what makes this show different. It really forces you to reflect on your insecurities and perhaps your contribution to other’s insecurities. To the point that it is hard to just sit right through an episode and not pause. For the thoughts in your head which bubble up and start messing with you, they distract you. For even if you can’t directly identify with the look or experience with anyone, your mind begins to come up with ways that make it so you realize these stories aren’t foreign to you. They are part of you and your past, you just don’t want to admit it.

With that said, can I just say I sort of miss Clay’s voice overs? I get that with him being alive and interacting with people, that doesn’t make sense to be part of the narrative, but it doesn’t make that feature any less missed.

Subplot 1: The Need To Be Punished (Alex, Jessica, and Justin)

Alex feels the need to be punished. It isn’t clear if it is because of Clay or just how much it is dawning on him how things haven’t truly changed, but he wants karma to cash in its chips. However, even when he seeks out trouble by getting into a fight with Montgomery (Timothy Granaderos), he gets a warning. In the last episode when he was speeding, what did he get? A warning. There is no punishment and he doesn’t understand why he, or anyone else, aren’t paying their dues for what they have done and continue to do?

As for Justin and Jessica? Well, it seems the weight of the situation, and Justin dealing with his mom breaking up with another asshole is getting to him. To the point, he is pushing, literally pushing, Jessica away. And lest we forget, many of the characters of this show aren’t too different from Hannah. If only because they seek hope and a connection in all their interactions. Yet, increasingly, episode by episode, we are seeing these connections they held dear, which they thought were strong, becoming toxic and disintegrating. Leading you to wonder if Hannah maybe the only one who is dead by the end of the season.

Guilt is a strange thing, isn’t it? Especially when you can’t say it isn’t 100% your fault, but you could have played a role in stopping something or making it better. In a way, on top of being punished, it almost seemed like Alex wanted to see if anyone would really try to stop him. Like if anyone would have tried to break up the fight. Yet, like with Hannah, people just watched, took out their phones, and saw someone else’s drama and troubles as entertainment.

I feel fairly certain Tony is gay and while Clay knows about it, he doesn’t talk about it. If only because we see him on a coffee date and the way he talks about the dude with the zine, it seems like he, like Hannah, was looking for love in all the wrong places.

Tony aside, Clay and Sheri share multiple moments and even a kiss. Hell, they make out. Yet, she reveals she is not only on the tapes but perhaps has feelings for Clay too. But with him knowing she hurt Hannah, and her knowing he was thinking of Hannah while on top of her, kissing, it seems their possible love affair ends before it begins.

The actresses on this show dude. Alexus may not have had a moment like the actress who plays Courtney, where she breaks down her life, but there is still something about her you just want to see more of. There was this softness to her which makes you wish there were more YA novels featuring Black girls so she could star in them. There is this vulnerability which, in the age of Black women always having to be strong, the best, and more, you don’t often get to see. So when it came time for her to start her sob story, I must admit I was pushed to shed a tear. For continuously, this show makes it hard to quickly damn those who Hannah says played a major part of her death. For they aren’t just names on a page anymore. The writers fleshed them out and make it so their decisions aren’t all black and white. Making me hope Sheri doesn’t end up in the background but perhaps, like Tony, is some sort of support for Clay. Even if she was dismissed like she was another attempt by Justin’s folks to keep his mouth shut.

Switching to Tony, I wonder if his connection to Hannah was coming out to her? Maybe even talking about it. Because with her being fairly new, and Tony not seeming like the chatty type, I’m unsure why else he would personally know her. With Clay, it makes sense because he was a peer tutor, but his connection to Hannah, to the point he was meeting with her mother and knew who she was, not so much. Especially because his dad’s shop is likely on the “Bad side of town.”