Wherever I Look
Recaps, Reviews, and So Much More
Home TV Series Thirteen Reasons Why: Season 1/ Episode 5 “Tape 3, Side A” – Overview/ Review (with Spoilers)
TV Series

Thirteen Reasons Why: Season 1/ Episode 5 “Tape 3, Side A” – Overview/ Review (with Spoilers)

You know, it amazes me how you can separate yourself from a show for a few hours, and then be put right back in your feelings when you start it again.

Episode Focus: The Secrets You Keep – Part 1 (Hannah and Courtney) 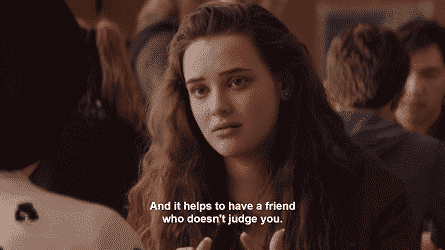 Courtney’s life is heavily influenced by making her dads proud and being an example. Her parents raised her during a time before gay marriage was legal and when two dads were not only far from the norm but suspect. So, she has tried to be the ideal kid. However, that picture, that picture that for a long time no one associated with her, Bryce reveals he knows and starts spreading the word. Thus forcing Courtney to throw Hannah, and this girl Laura, under the bus and say it is not only them but confirm some of the rumors going around about Hannah.

But while Courtney adds her name to Hannah’s list of fake friends, Hannah tries to be friends, again, with Jessica. Someone who, the first time she meets Justin, he gets her sloppy drunk. So, to keep something bad from happening, Hannah gets her out of the situation. Something Jessica doesn’t really fight Hannah on and surprisingly, she even apologizes about the slap while they are in the car.

Hannah is better than me. After all, she has been through, even just in one night, the fact she still decided to help Jessica out and avoid a potentially bad situation was amazing to me. Though, I think it also pushes the point of how desperate she was for a true friendship. She’d help out someone who called her a slut, probably helped push that rumor and slapped her in her face. But she didn’t just remove her from the situation and give her a warning or talking to, she offered her a ride home, food and water to put on her stomach, and URGH! I am fully aware this is a fictional character, but Langford got me all kinds of F’d up. They are still casting for Looking for Alaska right? She got the look for it, cast her. [note]Though, on second thought, does she want to be type cast as the girl who dies? I mean, Sean Bean has made a career of dying in his productions so it isn’t that bad of a life? Right?[/note]

Subplot 1: The Secrets You Keep (Clay, Justin, Alex, and Courtney) 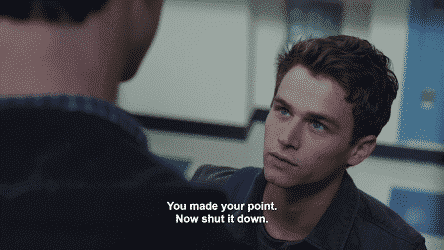 After the Tony exposure, everyone is worried what Clay may do next so Justin decides to use some scare tactics. With Alex, they drive 90+ miles an hour as if they are going to kill him, and everyone else in that van. Something which, so it seems, may have scared Clay off enough to not be a vigilante anymore.

However, before that happen, it seemed his next piece of justice was forcing Courtney to not only admit she may be gay but recognize her part in killing Hannah. Something she refuses to do but Clay really grinds it in and it forces her to explain to Clay how life is. She breaks down, both figuratively and emotionally, what it is like being raised by gay parents and everything noted in the episode focus. Thus reminding you that, like with Alex and Justin, there is an almost incomplete perspective given about these people. One which makes them more than just the people who failed Hannah when she needed hope. [note] I really find myself having a vested interest in Tony now. He is this weirdly cool guy who seems to be very down to making sure his friend Clay is cool, and it makes me wonder how they became friends? Much less why? For what he does at the dance, between the slow song and giving Hannah a mixtape to remind her of her dance with Clay, that is some BFFL type of moves. Though, I still wonder, is Tony gay? Cause this show, between Courtney, Laura, and there was a lesbian couple at the dance, is very queer friendly. So how cool would it be if Tony was! Especially looking as macho as he is and being a person of color[/note]

I’m not going to lie, Courtney’s speech about needing to be perfect so she wouldn’t add onto her parent’s burdens got me teary eyed. For it honestly did seem like she was an overachiever because she was written to live up to Asian stereotypes [note]Is that messed up to say?[/note]. However, it was far more complicated than that. And really, while I’ll probably gush about Langford for this whole series, Ang really stepped into the spotlight and nailed it. Making it suck Hollywood doesn’t show a huge amount of love for Asian actresses, for it would suck if she had a career stuck in the background when you can see she has talent.

Courtney aside, I’m getting the vibe that Alex wants to do as Clay did and punish everyone. For while he isn’t completely accepting his part when it comes to Hannah, you can tell he hates the result of what that list did to his relationship with Jessica. But there is something about being forced to be in Justin’s gang, and the ridicule, which seems to be getting to him. Not to the point that he is at Tyler’s level where you can see him becoming the next Hannah, but he may be on that path.

For, outside of Justin and Jessica, the people noted so far seem like they are going through it. Partly because of the threat Clay poses, but also because he is forcing them to truly reflect on those tapes instead of perhaps listening to them and moving on. 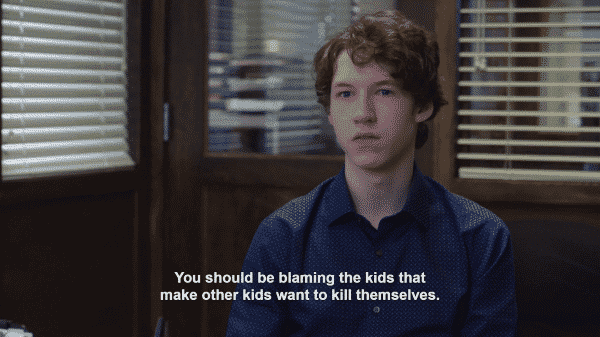 Something Olivia refuses to do and that is why the school gets lawyers, one being Clay’s mom Lainie, to go to trial. [note]The principal notes they lost two students in the space of two months, who is the other student? Did Skye die off-screen?[/note]

It’s going to be interesting to see Lainie tear into Hannah, or at least try to make it seem the school didn’t know what was going on. This, unfortunately, maybe the way to bring the parents to the forefront and really make it where you have to see their pain. For it isn’t like Olivia’s hasn’t been there but the book was never about them, they were not even named really. So when they are on screen, they are almost like how children seem when a show focuses on adults – like accessories, proof someone had sex. But that may be changing soon. However, I’m doubtful they’ll have a moment like Ang did this episode or deliver as Langford has consistently been doing. [note]With this show, I can fully understand why people were devastated that Girl Meets World wasn’t picked up. I mean, just imagine with the freedom that Netflix is giving this show, what Michael Jacobs and crew could do.[/note]