Wherever I Look
Recaps, Reviews, and So Much More
Home TV Series Thirteen Reasons Why: Season 1/ Episode 4 “Tape 2, Side B” – Overview/ Review (with Spoilers)
TV Series

Thirteen Reasons Why: Season 1/ Episode 4 “Tape 2, Side B” – Overview/ Review (with Spoilers) 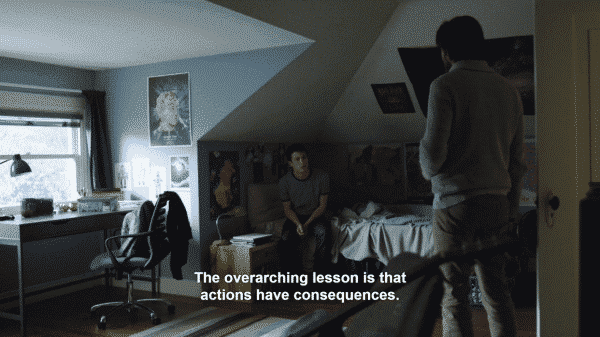 Remember the need to look for that red flag in the last episode review, yeah, now it is time to grip it as Clay is getting thoughts of being a vigilante.

Table of Contents show
1 Episode Focus: What Tyler and Courtney Did (Tyler [Devin Druid], Courtney [Michele Selene Ang], Hannah, and Clay)
1.1 Commentary
2 Subplot 1: And It All Falls Down (Clay, Andy, Tony, and Olivia)
2.1 Commentary
3 Subplot 2: That Was His Last Chance (Justin)
3.1 Commentary

This episode focuses on Tyler taking pictures of Hannah and the moment he captured Courtney and Hannah kissing. Though, as we have seen time and time again with the series, it is much more than Hannah’s side of things. For Courtney, who tries to befriend everyone, and seems to have so much pressure on her, it could very well be she is bi or a lesbian. Making those pictures evidence against the one thing about her which isn’t normal or perfect.

Then with Tyler, he is as awkward and odd as Clay but, unfortunately, he is far weirder. He fell in love with Hannah through photos and how natural she looked. How she didn’t present herself with a mask and he took it too far. So, as his punishment, Clay decides to take a naked picture of Tyler, which shows his behind, and send it to the people he knows have seen the tapes. Thus making him as bad, if not worse, than Tyler. Especially since it seems Tyler has no friends and, following the pattern of this show, likely it was Bryce who leaked the make out picture. 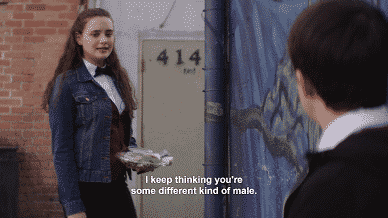 Please believe me when I say I’m not trying to justify what anyone did to Hannah as I see things from their point of view. It is just, say you have a friend and they thoroughly trash somebody. They call them a stalker, a creep, a deviant, and naturally you will believe them. However, flip the script for a second. Imagine you are the friend of this stalker, creep, and deviant. With what we’ve seen thus far, we get that experience of knowing these characters past how Hannah saw them. With that, some prove themselves to be as Hannah thought of them as. Yet, for Tyler, as creepy and wrong as he is, I don’t think what Clay did to him was justified.

If only because Tyler already has his hand in being one of the stabs to Hannah’s body. So him taking his picture [note]and stupidly not masking his ID when sending out the nude pic[/note], how does that make him any better than Tyler? Much less, with Clay talking about all the legal ramifications for what Tyler did, does he think the same doesn’t apply if he did it? The law doesn’t change when it is boys taking pictures of boys. I mean, didn’t Clay just in the first two episodes note that he just finally fended off gay rumors? This surely doesn’t help.

Subplot 1: And It All Falls Down (Clay, Andy, Tony, and Olivia)

Andy’s business is going into the tank thanks to some WalMart like warehouse store and Olivia? Oh, she is still a mess. Such a mess that while Clay is tempted to give her closure by giving her access to the tapes, he fears she may kill him when she learns he had a part in it. However, no matter how you look at it, it seems Tony is staying close with the Bakers just in case the day comes where he needs to give them those tapes.

And speaking of Tony, it is revealed that the guy he was beating up, well that guy was messing with his sister. Since, you know, Tony is at least one of 5 siblings and with the cops in his area not being like the cops in Clay’s, they sometimes have to administer their own justice. Now, as for how and why Hannah got involved with Tony, that remains to be seen.

Let’s set aside the Baker storyline since, honestly, as much as it is interesting to see the adult/ parent point of view and how they are affected, it isn’t much of a draw. What is though is that Tony is bringing race and social status into this show, which I wonder how other people will take. For, in various ways, Tony is straight up Latinx/Hispanic. The way he talks about his family, his neighborhood and all that, you can tell he is a Latinx/Hispanic dude who grew up in an urban area. Which, to be honest, I feel sort of iffy about that coming into the story.

I know, strange, the guy who talks about diversity so much turning his nose up when it is brought into a book adaptation which was without much in the way of physical descriptions. But my issue is that, for one, it sort of feeds into some negative stereotypes, and also you aren’t sure what the point is? What point is there in showing Tony is rough around the edges and administers street justice? What is the point of bringing these “Note your white privilege” moments with Clay? A part of me is tickled by it, but as someone who read the book, I sort of question why must they bring such politicized statements into the show.

Though, I guess, what leads someone to suicide is already a touchy subject so why not bring more?

Subplot 2:  That Was His Last Chance (Justin)

Marcus makes the final effort to get Clay to join the group and with Clay taking a pass, Justin is ready for the tapes to end with Clay and for homeboy to learn why he should keep his mouth shut.

Justin is starting to look a little crazy, and for good reason. He can perhaps obtain the kind of life Bryce has if he can just get out of that town and away from his mom, but Clay threatens that. Though, whether or not he, alongside the rest, will beat Clay within an inch of death, I don’t know about that. However, considering how Tony has been built up to be a guardian angel, with 3 brothers who can act as seraphim, good luck to Justin getting Clay alone and vulnerable.

Especially since, with that Tony picture, it shows the tapes getting out won’t be the sole thing everyone has to worry about.

What was in the box that Justin opened and Bryce said it’s his dad’s?