Thirteen Reasons Why: Season 1/ Episode 10 “Tape 5, Side B” – Overview/ Review (with Spoilers) Did you ever wonder what happened to low-key, hopefully, fan favorite Jeff? The guy who, alongside Tony, pushed Clay to participate in life? Well, prepare for your answer.

Remember how in episode 5 it was noted the school lost two of their students? One we knew was Hannah, it has always been about Hannah, but the other one was Jeff. Perhaps one of the kindest people on the show died in a car accident. One which, between Hannah and Sheri, could have been preventable.

Let me explain. On the night of Jessica’s party, Hannah had enough. She witnessed a rape but her legs, she could barely move. Luckily, unlike Courtney, Sheri is genuine when it comes to her kindness. So, like how Hannah got Jessica out of an unfavorable situation, Sheri did that for Hannah. Problem is, as Sheri was digging for a phone so Hannah could call her parents and sleep off her drunkenness at Sheri’s, Sheri hit a stop sign and knocked it over.

Now, I know what you might be thinking, was Sheri drunk? Well, she did a cartwheel, a rather good one, so the answer seems to be no. However, that one distraction led to her hitting a stop sign and fear of getting in trouble kept her from reporting it. Thus leading to the conclusion, when Jeff died in a car accident, it was because he was drinking and driving. Something especially thought of since he had beer in the car.

Leading to the need to speak about the days and weeks after. Hannah wanted to reveal to Clay what happened but, being that he saw it as an opportunity to make the situation about her, he shut her down[note]Thus leading you to understand why Hannah has been so hot and cold toward Clay. He never really took note of how painful his words were or could be. Much less, how damaging his looks of disapproval potentialy were.[/note]. But then there is the topic of Sheri. Both try to confront her, to have her tell the truth but, like everyone else, there is no desire to reveal her secret. Yet, she shows repentance.

Which is how Sheri is different. She, to atone, visits and helps Mr. Cantrell, who was the other person involved in the accident. But as for Jeff’s parents, not a word was said. So, Clay tells them the truth. Not Sheri’s involvement but what happened, him seeing their dead son, and relieving them of the belief he was drinking and driving.

I’m stupid. Despite noting how I read the book in damn near every review of this series, I forgot about the car accident. If only because, neither person involved mattered before. They were just part of Sheri’s secret. Now, though, they have faces, names, and Jeff has been built up to the point that seeing him dead in the car, it is hard to not get emotional over seeing that.

Then with Sheri, sort of like Alex [note]Who sort of comforts Clay after Jeff’s accident[/note], you see a sense of guilt. However, she takes it a step further and probably does what Hannah wished more people did – she didn’t let it fester but acted on it. She tried to, even if in a little way, make things right. Thus, like with many of the characters, complicating your feelings on the matter. For Sheri, like Alex, maybe even Zach and Tyler to a point, you can tell they had issues before Hannah stepped into their lives. Making it so they weren’t necessarily equipped to deal with her issues, on top of their own. Hence why, I think, they did the things they did.

For when you are drowning but trying to pretend you can swim, what time do you have to make the effort to keep someone else floating?

She knows, and she knows Justin knows. Hell, she probably knows Bryce is the one who did it. Yet, she doesn’t care. With a drink in hand and a boyfriend who is keeping up the lie so she doesn’t have to deal with it, she tries to not care. But Justin is pulling away. She is trying to forget and the one person she needs to make what Hannah said a lie is acting funny.

So she hangs out with Bryce. She wants to forget, wants to perhaps get her own punishment and what she deserves, so she decides to be alone in her home with the man who raped her. Yet, for a moment, you almost believe she wants him to experience the fear she did as she brings out her father’s gun. Yet, as she puts it in his hand, and shows him how to use it, you can only wonder if this butt wipe, the cause of so much pain, he may use that weapon against someone.

When Clay traded in his wildcard status, apparently Jessica picked it up. For she really seems to be going off the rails now. I mean, her issues with Justin make sense because they are dealing with the rape and how to handle it, but her being alone with Bryce? In her house? With a gun? It gives me Big Little Lies, type of vibes. Wondering if she may do something she may end up regretting. Maybe even doing as Justin would and make it look like an accident, a suicide, if not self-defense. For with this show, while that red flag has been put firmly back on the ground, you never know what maybe around the corner.

Subplot 2: How Much Is Your Child Worth? (Olivia & Lainie) 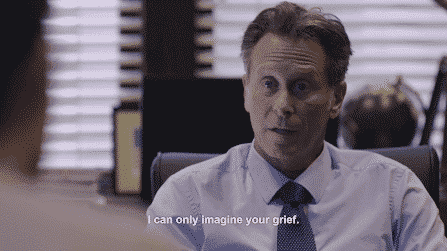 It is time to go to the table before going to trial and the school offers an NDA and $200,000 for its part of Hannah’s death. Oh, and a massive amount of guilt for even accepting the money and letting the Bakers know that the money they take will affect their future suicide prevention efforts. Leading to, of course, Olivia questioning Lainie’s part in all this. How much would Clay be worth to her, is one of her questions? And in the end, all Lainie can see, being that she is on the other side of the table, is that Olivia should keep looking for the truth, whether she wants to accept it or not.

I feel like I don’t give enough credit to the parents on this show. It’s easy to disregard them since they were absent in the book but, as with damn near everyone, they do make their presences known outside of Hannah’s perspective of them. Kate Walsh especially, who is really bearing the weight of every parent who fears their child could end up like hers, is really something. She doesn’t necessarily leave you with tears or anything, but as you connect with her and she lets you experience the weight of this cross she is bearing, it leaves you tired, sore, and your mind heavy with thoughts. Making her much more than the aforementioned comment of “Just being proof that someone had sex to make Hannah.”

I find it interesting Hannah wants Sherrie to admit to knocking over the stop sign because it could have possibly caused the accident. Although Hannah could have prevented Jessica’s rape but froze nor told anyone til after her death.

In a way, there is a certain amount of responsibility that Hannah doesn’t take for her actions. In the book she is written as a straight victim, no questions. However, in the series you realize that she, as she notes to Clay, is always looking for the wrong person.

In the case of Jessica’s rape, she was looking for anyone but her to take on the weight of revealing it to Jessica and confronting Bryce about it. For, so it seemed, Hannah wasn’t good at confrontation. She wasn’t the type to consistently be able to stand up and defend herself so to do so for someone else was unthinkable. She always looked for someone else to. She looked for Clay to do that, looked for Justin to refute rumors, as well as Jessica, Alex, and even Courtney to a point.

I think it has to be remembered that Hannah was a introvert, someone desperate to find someone to come into her world where it was safe, because she feared all the possibilities of the outside one. Hence why she kept going back to people who, even if they did her wrong, she was comfortable with.

At least, that’s my take.