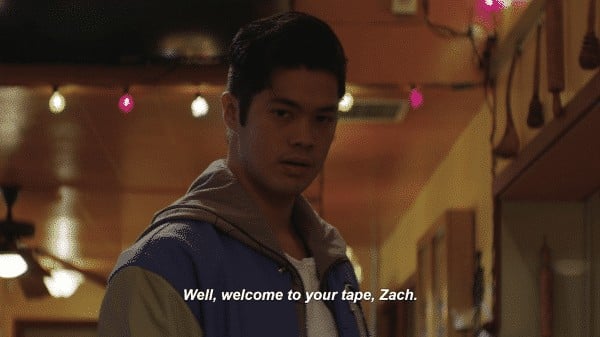 Clay is losing his mind. He is seeing images of a dead Hannah, hearing things, and not in the privacy of his room but in public. The guilt is weighing on him so much he turns back into a vigilante and seemingly is ready for the truth to be revealed.

Image of Hannah with wrist slit below.

Episode Focus: We Are All Lonely, But I’m The Loneliest of All (Hannah and Zach) 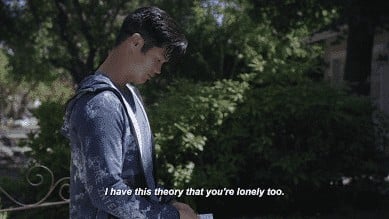 Can you be both popular and lonely? Perhaps Zach can explain that to you. For while he may be part of the crew, like for Alex, there are certain sides to his person he can’t reveal to his “friends.” So that was part of the reason he approached Hannah. She knew what it was like to be alone and he wanted to be friends with her, maybe even date her, but she publicly rejected him.

In Hannah’s mind, the rejection embarrassed him enough to take away her compliments as punishment [note]In Ms. Bradley’s class she has on this brochure carousel these compliment bags. In them, people note nice things about people they are too afraid to say to their face. In the books, it is noted no one says anything nasty, so you don’t have to wonder if someone wrote something which pushed Hannah over the edge.[/note]. But he didn’t realize his punishment could potentially be fatal. So, she tries to tell him, in a letter, what those compliments meant to her. She even, anonymously, puts a note in Ms. Bradley’s bag so the topic of suicide comes up. However, outside of Sheri and Skye, everyone, including the wannabe sweetheart Courtney, says the person is looking for attention or isn’t even serious. Thus leading to the cry for help being, sort of, met with deaf ears.

But, here comes the interesting thing. Hannah notes on the tapes the letter she wrote to Zach he threw out, however, after Clay keys his car, as part of his vigilante justice, he reveals he still has it. Leading you to question if what Jessica has been saying all this time is true: Is Hannah a liar?

You know, I feel like the readers of the book are being, not punished per se, but definitely put through the ringer. The Hannah we know exists, but each episode has us questioning more and more if this image we painted of her was the real Hannah? For, despite everything we know, and what we see, no one truly claims to know her or be her friend. Even Clay, which still bugs me, since we have seen them talk outside the movie theater and she was close enough to him, at one time, to give him multiple nicknames.

But you know what really boggles the mind, is the fact she never really stuck with Clay or even when Skye mentioned his name, thinking they were close, she dismissed the idea. Something which confuses me because, at times, it seems like the show doesn’t seem consistent. Clay has said stupid stuff, but then Hannah would still talk and hang out with him. Yet, as she goes on this downward spiral, she doesn’t approach him. She doesn’t try to make him the newest member of FML or anything. Her relationship with him just dries up and you wonder why? Especially since, outside of some stupid comments here and there, he never said or did anything which made it so he had to be cut off.

Switching to Zach, despite us never seeing the two hang out, you can understand why he and Alex are friends with this episode. Both of them have sides to themselves they seem to hide. Soft, emotional, and vulnerable sides. Yet, because of Justin and Bryce, and the toxic masculinity they bring to their friendships, neither has the ability to express that. Both of them have to be mindful and put a mask on to avoid being teased. To avoid being like Tyler and having no one. Making it so, which Zach’s actor doesn’t, or rather isn’t given, anything which may make him notable, in the big picture you can definitely see this show is flipping the script.

What I mean by that is, just as no one knew Hannah really, we are being shown that Hannah knew nobody herself. She knew bits and pieces, had theories but didn’t fully understand any of the people she decided to plant these seeds of guilt into. Really making it so, despite you recognizing everyone’s part in her suicide, she sort of seems like an f’d up person for putting all of the weight on them.

Subplot 1: The Guilt Is Killing Me (Clay) 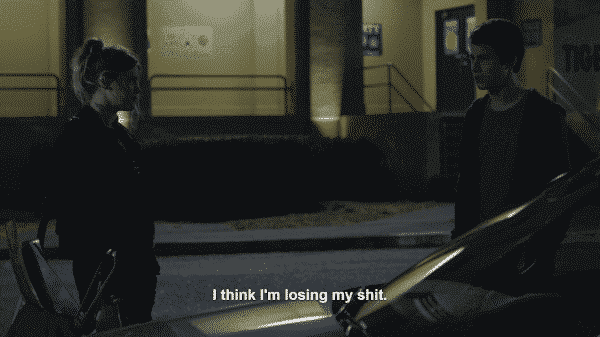 Hearing her haunting voice, even when the tape player isn’t on. Seeing her dead body, wrist cut and all [note] [/note] [note]Unlike in the books, where she died due to an overdose of pills, Hannah dies in the show due to slitting her wrists while in the bathtub. I guess that made for a more shocking statement[/note]. Clay can’t deal with it anymore. So, he gives the tapes to Tony and thinks he can move on. He can’t, he won’t, and it is because he isn’t strong enough to do so. Leading to him, likely in the next episode, getting the tapes back and continuing his journey.

I don’t think I like this version of Clay. This mousey dude is now portrayed as someone who needs therapy, who is losing his mind, and is so cringey that I had to turn off the audio to get through some of his scenes. I mean, there is something about the way Clay is written and performed which is having this show steer toward FreeForm territory. Leading me to really hope his mental state bounces back for his rant at the end of the episode lead me to tightly grip that red flag and begin to raise it a little bit.