As mom gets investigated, Cha-Cha and Hazel pay a visit to the Umbrella Academy.

Over The Course of 13 Years: Grace, Vanya, Allison, Luther

It is noted repeatedly that is had been 13 years since the disbandment of the Umbrella Academy and nearly everyone went their separate ways. During that time, until the present, for four years Luther was on the moon, five years ago Vanya wrote her tell-all, and Allison tried to have a family. All the while, Grace, the robot designed to raise the children, she had nothing but Reginald and Mr. Pogo. Two beings, both self-sufficient, who don’t fit Grace’s need to nurture and protect.

Which is why Luther believes she may have glitched and possibly killed Reginald. However, Grace has her defenders. 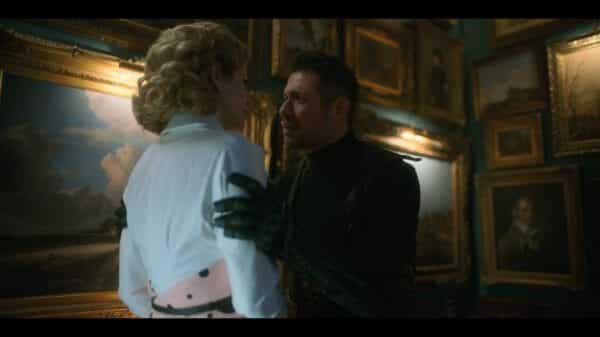 With Luther’s accusations, and the video Allison discovered which makes it look as if Grace did something, beyond take Reginald’s monocle, a divide is caused within the family. One which has Allison and Luther on the same side, and nearly everyone else on the other. The opposition is led by Diego who, despite his hate for Reginald loved Grace dearly for she helped him deal with his stutter. Her patience made him the man he is and so, robot or not, the idea of turning her off and treating her as disposable is not an option. After all, considering how Reginald was, who didn’t even give her a room, committing such an act would make them as bad as him.

Thanks to the employee at the donut shop, Hazel and Cha-Cha find their way to the Umbrella Academy and wreak havoc. This leads to Allison showing off her fight training, Luther going hulk on Hazel, and Diego tag teaming with Allison on Cha-Cha. However, in the end, the fight produces a stalemate. Well, depending on how you look at it.

When it comes to Cha-Cha and Hazel, being that they kidnapped Klaus, they may have the upper hand. But, taking note the fight left Vanya feeling useless, led to Diego realizing Grace really is broken, and Luther got embarrassed by how hairy he has gotten (?), maybe the Umbrella Academy may not have lost the war, but certainly did the battle. One they may not be able to recover from just in one episode. While the show features quite a bit of drama, arguably a lot of it either falls flat or, at best, is building to something. However, we got our first quality moment in Diego and Grace, both in present day and when Diego was younger, interacting. For while Grace has been referred to as mom, and the kids call each other brother or sister, this was the first time we saw a bond behind the title. Well, a relationship which seemed to be more than words.

This isn’t to downplay Luther and Allison’s scenes, but there was something about Grace helping Diego as a kid, with his stutter. In that, we saw a genuine connection which goes beyond familiarity that comes with knowing someone your whole life. In that moment, Grace was mom – no matter if she wasn’t his biological mom, a cyborg, or whatever. So seeing him turn her off in present day? That was the first real emotional moment this show delivered.

Vanya Seems Weirdly Out Of Place

Don’t get me wrong, I like Vanya, but the way she is written and Ellen Page plays her makes her seem like she belongs in an indie drama. Which would be fine if Vanya had moments which made you emotionally invested. However, with this show, it seems like it often dumps sad and pitiful facts to make you feel and doesn’t really want to do the work. You know, like it wants that quick tear and that long haul, gut-wrenching cry? It’s not about that life. I have been skipping over the details of Number Five’s mission to save the world since it is probably the least interesting storyline going on. Maybe that is a testament to how cagey and a know it all Number Five is, so we feel about him like his siblings do. However, considering he is the one closest to how the apocalypse happens, you’d think the most interesting thing about him wouldn’t be that two people are trying to kill him and repeatedly failing.

Meet The CharactersPurchase The Graphic Novels This Is Based On: Volume 1, Volume 2, Volume 3 (You Can Get Volume 1, And Access To Many Other Books With Kindle Unlimited)
You Might Be Interested In