Despite the last episode’s events, the focus of “Fork” is more so Beth testing her ability to have a personal life as chess begins to lose its luster.

With losing Alice, her mom, potentially to suicide, being on tranquilizer pills for almost a decade, then losing Alma, how Beth deals with Alma’s death is a bit unconventional. At least in terms of her barely being mentioned and not necessarily a factor in Beth’s life. This isn’t to say the episode doesn’t nod to Alma’s absence, but considering Beth’s life until now, you would think there would be some visible reaction. 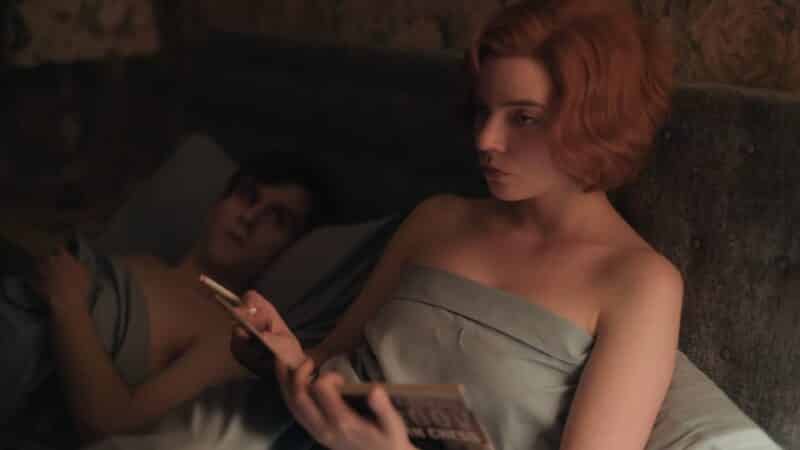 Yet, there isn’t, and while you could contribute that to Harry filling the void of Alma’s absence, it doesn’t necessarily feel accurate. Yes, him coming around, moving in, and those two having a summer fling, it likely was a nice distraction. However, you also get the vibe that Georgi is still in the back of Beth’s mind, and with Harry talking about falling out of love with chess, so comes the question of what to do once the obsession ends? Who will Beth be once chess is no longer all-consuming?

That is a question for another day as Harry takes his leave, with realizing Beth isn’t as passionate about him as she is chess and having someone keep her company. Leading to her first solo trip to compete in the 1967 US Nationals in Ohio and coming across Benny. Someone who still walks around like he is in a western and wishes he could carry a gun and shoot frisbees for fun.

But, with Beth being older, more mature, rather than Benny just being another player she needs to defeat, he offers the chance to be social. This offer, at first, isn’t taken since Beth isn’t necessarily a people person. Never mind the idea of being overly friendly with a competitor makes her feel she could be manipulated.

This isn’t to say she considers Benny devious, but more so, after spending time with Harry, it appears Beth realizes she does have needs and desires for company, sex even, but with who and when? And considering, after beating Benny, he makes it sound like Harry talked about having sex with Beth, there is yet another reason to be wary of the men she meets.

However, when it comes to Benny, Beth lets her guard down a bit. Maybe it is because she is so isolated and hasn’t really made friends since Jolene? If not, the need to connect to someone, rather than alcohol or pills to her lips, drives the reason for a vulnerable moment? One that inspires Benny to train Beth.

Mind you, not like Harry, since Benny still has a multitude of ways he is better than Beth, especially at speed chess. Also, he claims no intention of having sex with her. But, in his home in New York, he does commit to training Beth so that when she heads to Paris in a few weeks and Russia after that, she will be confident, skilled, and mentally ready.

Anger is a potent spice. A pinch wakes you up, too much dulls your senses.
— Harry

Alma’s Death Just Being Swept Under The Rug

Should Beth be a blubbering mess, ripping things off the wall, suicidal, and being overly dramatic? No, that’s not what we’re saying. However, Alma was a maternal figure, a friend, technically an employee, and was with Beth for years. You’d think, beyond what we saw in Mexico, with the initial shock, there would be something more.

But I guess the idea is here, between Beth’s obsession with chess and a mental state that might have already numbed itself to human connection, she is a survivor. One that pushes on, as Borgov mentioned.

(Possibly) Looking For Love In All The Wrong Places

Whether it is love or companionship Beth is looking for, it is hard to say. She put up with Jolene calling her cracker, paid Alma more than she asked for, slept with a few men without love being on the table, and Harry simply cause he made a move it seemed. So, what is she looking for? Is she possibly planning for life after becoming a world champion or a master? She did see someone in high school with a kid, and while alcohol bottles clinked right below the baby, showing Beth that life isn’t everything, could she want that?

It’s honestly hard to say. For while we know about Beth’s interest in chess, there is the need to sometimes question what is her end game? What does she want to do with her life, and is chess the only thing or just the path she was set on? Heck, maybe all she thinks she is good at, hence her dedication to it.

The Former Thrill of Beth Playing Chess Is Wearing Off Chess in The Queen’s Gambit is beginning to become a background player in the show. For as Beth’s personal life and addictions are brought more to the forefront, chess is just what finances Beth’s lifestyle. Leaving you to wonder, will we get to see post chess Beth, or once she peaks too early in life, that’ll be the end, and she’ll join Alma and Alice?

Alma's Death Just Being Swept Under The Rug - 70%

(Possibly) Looking For Love In All The Wrong Places - 75%

The Former Thrill of Beth Playing Chess Is Wearing Off - 72%

Beth's search for intimacy makes chess an afterthought, and the lack of acknowledgment of Alma makes you think the show just wants to move on as if she didn't exist.