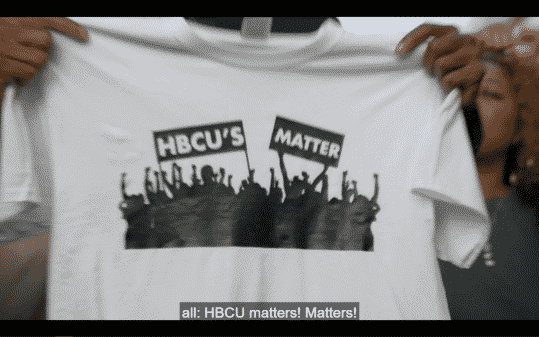 The Quad, thankfully, steps away from the administrators’ drama and refocuses on the students and the school they serve and are trying to keep open.

Pledging Isn’t All It Is Cracked Up To Be: Cedric, Bryce, Miles

To put it simply, Cedric is only on the line, which has now been extended, to keep Bryce on and increasingly Bryce isn’t happy about this. In fact, Miles taking more and more note of Cedric’s leadership skills is presenting the kind of challenge which can only go one of two ways: Bryce stepping up to be a better leader or stepping to Cedric and trying to get into a confrontation. Either way, between jock strap juice, being at the frat’s beck and call, and being talked down to, it is hard to say how much longer Cedric may put up with this.

After films like Burning Sands and GOAT, it does feel like one of the most dramatic shows I’ve seen in a while downplays this whole frat thing. However, considering how much ridicule the first season got from HBCUs and their portrayal, I guess they didn’t want the wrath of Black fraternities soon to follow so they kept things from going too far. But, to be honest, I’d rather watch this than Eva’s drama any day.

BoJohn and Cedric are having trouble with the women in their life. For BoJohn, after the whole Dwight situation, Tiesha is waiting on an apology. One BoJohn doesn’t want to really give since he thinks she is in the wrong and since they smashing, he thinks he deserves an apology. To add onto that, ole boy Junior didn’t know they were smashing and with him having a crush on Teisha back in the day, it seems like he felt he deserved to know.

But the issues don’t end there. Tiesha has wanted to keep her situation with BoJohn on the hush-hush for a few reasons. The biggest issue for BoJohn is because she can’t deal with being into a white boy. This is followed by him being a football player and with her being with Terrance last year, she don’t wanna seem like she running through all the players.

As for Cedric? Well, it seems like he may become a target for Noni for with him messing around with Bronwyn, Ebonie, and talking to Amoure like they got something on, she feels a certain kind of way. Which, in turn, makes Cedric feel like Noni needs to mind her business. However, one thing Noni wasn’t privy to is how Ebonie downplays her relationship with Cedric when with him but apparently makes it seem like something else with Noni.

However, it seems that may change. He confesses to be into her, she into him, so maybe they’ll stop being coy about their feelings. Though, considering how Cedric has traditionally gone for medium to light skinned girls, believe that will come up as one of Ebonies’ insecurities about their relationship.

I really do hope Noni, with her always wanting to start something self, really does continue to be in Cedric’s business. For right now, though previews show she is still doing work for Cecil, I want to see more for and of her. Why can’t Noni get a love interest? See her life outside of being enamored by Cecil? Heck, they could even make her queer and have a thing for Bronwyn if they wanted to. Also, her hacking skills? I wouldn’t mind seeing her do some work on her major which, I assume, deals with STEM.

And speaking of underutilized characters, they could beef up Tiesha’s storyline as well. If I was as .gif and meme-heavy as I used to be, she would probably give me a full folder of reactions. But, what about beyond that. How about Tiesha when she isn’t being a comic relief? Which isn’t to say I don’t appreciate Tiesha’s around the girl ways. I love it. But I want it to be used for more than side-eye, sass, and banter with Sydney.

Friend or Foe/ Ready To Burn a Bridge Before It’s Even Built: Eva, Sydney, Cedric

Urgh, Eva. While she is the lead of the show, she is also the one who is the biggest liability to it all. But let’s not downplay how Sydney plays a factor in that this episode. You see, Eva was trying to have a nice private chat with Dr. Helen Chambers, one of the heads of the Georgia University system. However, Sydney decides to let it slip the meeting is happening. Seemingly just to see why all the students of GAMU are suddenly wound up all of a sudden.

This leads to Cedric, and many others, heading over to the school, protesting, and learning there is a racist, possibly alt-right, presence there. People get hurt, like Madison, words like “Monkey” get thrown around and it seems like a brawl will happen. However, then Dr. Chambers and Dr. Fletcher step out and sort of calm things down. Though, one caveat of this is Dr. Fletcher having to ride the bus to campus with her students. Leading to, as before Cedric really testing this relationship he has with Dr. Fletcher and perhaps making her wonder how beneficial it truly is to her.

Though, really, maybe people need to question how beneficial a relationship with Dr. Fletcher is. She talks about money issues to Dr. Chambers and when Dr. Chambers notes she has gotten some from one of her investors, Eva is ready to bite her head off just because they’ll fund a party but not some of the school’s needs. Then, rightfully so, she comes after Sydney but with her realizing Sydney might be her only ally in the school, she takes her weak answer for why she did what she did and they have a cute mommy and me moment over why Sydney is now glad she is a GAMU student. Especially in regards to how Madison and the IDC girls helped her recover after she was raped.

Are you telling me, with how Dr. Chambers has been noted to be the president of their college all this time, just now these alt-right people are getting in a tizzy? Your school is run by a Black woman! One who isn’t trying to blend in, pass, or negate her blackness. I’m so confused why she only heard whispers and rumors about them but then they organize in mass during the GAMU protest. But, hey, The Quad is very much about the Black experience and while some parts of it get more, if not a better, focus than others, with diversity still being rather limited, you take what you can get.

What matters here is that Eva’s role on the show, alongside the administrators, got put into the backseat and the kids were allowed to drive. That Eva wasn’t the ones they were responding to but she was responding to them, and it seemed the show worked better that way. It certainly won’t stay like that, but a reprieve every once in a while from us being reminded Eva is the actual lead and not part of an ensemble cast is always something to relish in.

“[Eva: You really have found your voice] Sydney: I’m becoming more comfortable with it.”