As Salen’s presence forces Shaun out of his protective bubble, it forces the man who created that bubble to reconsider his priorities.

Walt is Holly’s father who, despite lacking a formal education in medicine, or having a high school diploma, accurately diagnosis his daughter’s condition while over a dozen other doctors did not. However, when Salen puts him on his daughter’s case, we’re reminded why it is considered unethical for patients and doctors to be related. 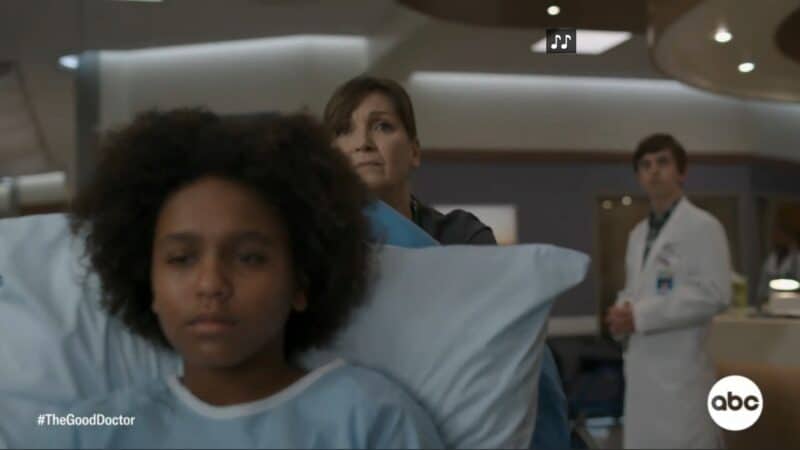 Just Prepping For The What If – Alex, Morgan

Morgan is in the process of freezing her eggs. Why? Well, while not having a strong desire to have kids, there is a thought she might want them in the future, so this is a just-in-case procedure. One that has made her more emotional and could explain anything odd you may have found about Morgan since she is two months into the process.

Now, as for Alex’s take on this? Let it be noted, she isn’t specifically doing this for or because of him, but he is encouraging and seems to understand that if they stay together, he’ll be the father.

Salen’s claim to fame is that she once had to advocate for herself as a client, and with her knowledge for data, she is changing how hospitals, and the medical field, works. The problem with that continues to be for Shaun, she isn’t talking to anyone before she does anything. For example, her putting his face on a giant billboard doesn’t sit well with Shaun. Beyond the hair part being wrong, he does not like his ASD being at the forefront of what defines him. So, naturally, he wants Salen to take it down, and she says to give her 48 hours, and they both can think about it.

As you can imagine, being that Shaun has generally been appeased, one way or another, Salen making him wait, think, and modify his behavior to the environment, rather than the other way around, is frustrating. Yet, what tips things over is Salen allowing the father of a patient to get integrated into the conversations that decide what medical procedure to pursue. The father, Walt, isn’t a doctor, doesn’t even have a high school diploma, and because of that, Shaun is livid! As for everyone else? Dr. Andrews is a company man, so what the boss says goes, and he’ll make the best of it. This, naturally, leads to Shaun talking to Dr. Glassman and Dr. Glassman, despite his reservations, talking to Salen and making a deal with her. For with Dr. Glassman agreeing with Shaun and generally not liking Salen, he’d rather do her bidding, and have a few interviews, than have Shaun suffer. After all, Shaun is the closest, if not the only, thing close to family he has at this point. So what’s a minor sacrifice?

Well, here is how Salen feels: Dr. Glassman is coddling, if not stifling Shaun. Which she understands since she is aware of Dr. Glassman and Shaun’s relationship, which is going on 15 years. However, she also considers that no one made the level of accommodations Shaun has received for her, and at this point, Dr. Glassman is just making bad deals. But, Salen is always down for a deal that benefits her, so with Dr. Glassman willing to do interviews if Salen goes with what Shaun wants, she takes advantage of that.

Which leads to her getting what she wants, and Shaun, after admitting he can be wrong, realizing that Salen was perhaps right. How? Well, considering the billboard noted how he is different, and people see that as a positive thing, not something to look down upon, he receives that far better than he ever has. Then, in terms of including Walt as part of the conversation on how to treat Holly, he did have good ideas. His lack of proper training kept him from fleshing them out and fully comprehending the consequences, but his thoughts triggered Shaun’s.

So, in the end, it seems Salen presenting Shaun with adversity, treating him like an adult, and finding a balance between working with him and clearly defining who is in charge of who is working. As for Dr. Glassman? Well, with Lea helping to fix his car and him pretty much checked out already, it seems he is going to drive off into the distance and reflect on what’s next in life.

While it was only briefly mentioned, you do have to appreciate the topic being brought up. Showing off Shaun could easily be seen as both as Shaun, before Salen, was the only known character with any sort of difference that requires social accommodation. Heck, I can’t even recall us seeing someone who is a nurse or non-medical staff member who is on the spectrum or can be seen as “different,” for lack of a better term. So in that, you can see the tokenism, for it isn’t like the hospital is truly trying to be diverse.

Yet, you can’t deny the representation either. Between women in prominent roles and people of color, then Shaun, you have a pool of different experiences, cultural understanding, and means of thinking all in one place. Which is why Holly was so invested in Shaun. She didn’t know him or what effect autism may have on Shaun, but she wanted and needed someone different, for it took over 19 doctors and her father deep-diving into medicine to get a proper diagnosis. So clearly, atypical minds were not as proficient as everyone expected them to be.

Heck, considering Shaun may have been one of the first doctors to, eventually, give her father some kind of props? That in itself showed Holly was right, and Shaun was the person for the job.

The World Stops Accommodating You As An Adult

When you are in school, the level of accommodations you can receive is astronomical – in a good school district. If you have ADD, behavioral problems, autism, or a list of other obstacles that can keep you from learning, the school is legally obligated to make accommodations. That ends when you exit school and enter the working world, but you can submit the consideration was extended for Shaun.

Now, this isn’t to disregard Dr. Andrews gunning for him and forcing Dr. Glassman to put his job on the line for Shaun. Also, we’re not forgetting one of Shaun’s former bosses taking him away from surgery and all the others who tried to keep Shaun from doing what he does best. However, Dr. Andrews also sacrificed his job and got rid of someone for Shaun. Dr. Glassman got his job back, and despite his terrible bedside manner, going off on patients, and even making more than one nurse uncomfortable, Shaun still has a job.

Heck, lest we forget, he has probably pushed back or outright evaded orders from his boss on more than one occasion – something no one, whether or not they had autism, or were a savant, would get away with in the real world. This is why Salen continues to be a blessing on this show. She is incrementally breaking down this bubble Shaun has found himself in, thanks to everyone accommodating Shaun. But with her having a disorder of her own, Salen tasks Shaun to adapt to others and to the environment they set, rather than have him get his way while rarely apologizing or admitting her was wrong. Which I appreciate. In The Good Doctor, it’s rare to watch a character die, someone to notably fail, or the show really taking on the ins and outs of what it means to work and run a hospital. It dabbles here and there, but even with its characters, it doesn’t really stick too long to any challenge. Take notice how Dr. Lim’s PTSD storyline just went away, how Morgan now got relegated to being Alex’s tsundere girlfriend, and all the other storylines.

This is why we’ll probably highlight Salen until she is written off, assuming she isn’t going to end up a series regular. Salen challenges nearly every single character, not just Shaun, who has slipped into complacency, and now they actually are presented a challenge. They can no longer be in their comfort zones but have to fight, be awake and active, and not see doing a notable surgery as the only stimulating thing about their job. They no longer have a strong surgeon siding final decision maker in Dr. Lim or Glassman. They have Salen who makes the final call, and she leans towards finances and patient advocacy, when possible, with inventive means to keep within a budget. Thus making it so the doctors have been knocked off their pedestal and finally have to heed to someone with more power.

The Good Doctor: Season 5/ Episode 4 “Rationality” – Recap/ Review (with Spoilers)
Trajectory: Climbing
I don't think I've looked forward to watching The Good Doctor as I have since Salen was introduced. Morgan lost her edge, most characters didn't have consistent quality in their storylines, and while Shaun grew as a character, it was always within the influence of co-workers who treated Shaun less like a person and more like an asset. Almost like how a visionary with a terrible attitude would be treated. But with Salen, she doesn't coddle Shaun nor try to play the role of a villain in his life. With Salen, we finally get someone who doesn't try to excuse Shaun's ASD as an excuse for his behavior. It is acknowledged to be a factor but never a reason he shouldn't be held to the same standards as everyone else.
Highlights
Disputable
You Might Be Interested In