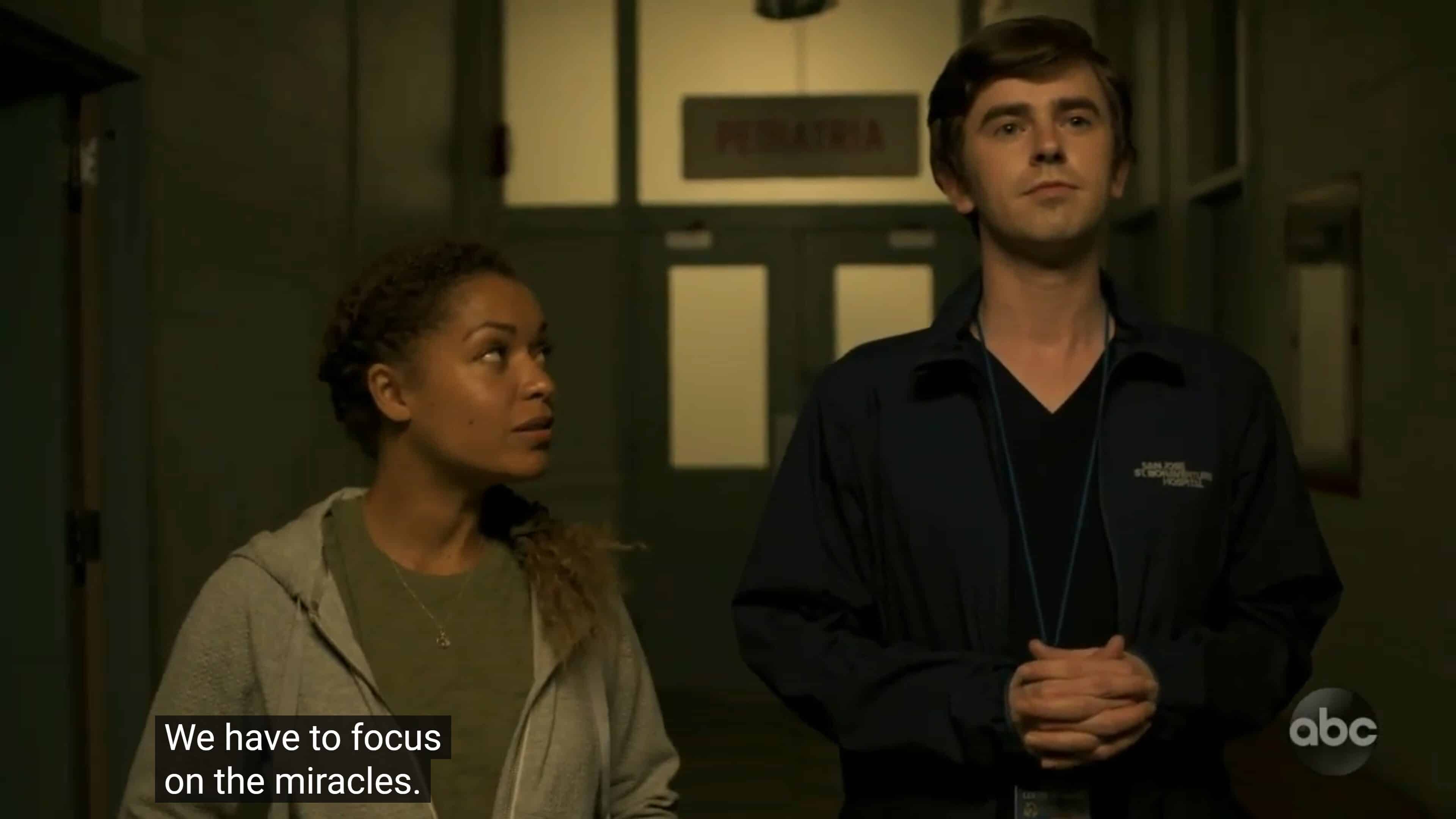 It being noted they are looking to make miracles

A trip to Guatemala to perform life-saving or altering surgeries begins, but with only 12 who will get the privilege of medical care, it weighs heavy on everyone.

Seemingly to be an extra hand, Lea comes on the trip to Guatemala, and it doesn’t seem to help much with her grieving. She isn’t really given enough to keep her mind off things, and with seeing a woman with a newborn, she gets triggered. Which she feels immensely guilty about, so she doesn’t want to tell Shaun, but with Claire catching her in a moment, she pushes Lea to communicate. Thus, she tells Shaun about her struggles, including struggling to see Shaun happy and potentially moving on while she isn’t. Hence the idea of returning to Hershey and being with her parents for a bit is brought up, and not portrayed as a bad idea.

As a last-minute volunteer, Dr. Andrews joins the trip to Guatemala, and while he works hard advocating for patients like everyone else, his nights are a little too much fun. In fact, his camaraderie with Nurse Morales, one of the main translators and people assisting in the project, raises some eyebrows. Specifically, it raises Dr. Lim’s eyebrow since she sees Dr. Andrews being friendly as flirting, and with him being very much married, she makes him aware that he is dancing towards that line. But, with him believing he is being harmless and in control, he plays off Dr. Lim’s worries.

This is fine since Dr. Lim’s focus is on the Guatemala team lead, Dr. Osma. Someone who may come off a little heartless at times, but that’s because he has been in the trenches for a while and has grown used to making tough decisions. But, when kidnapped, alongside Dr. Lim, to deliver a baby, he keeps everyone calm, and when the night is nearly over, it seems he gives Dr. Lim the kind of fun she wasn’t expecting on this trip.

Sex, they have sex.

Everyone who is either performing surgery or, in Morgan’s case, that can diagnose and help with aftercare, gets to pick the 12 who will get surgical care. However, debating who should get to have surgery is hard for Dr. Osma doesn’t want sob stories, he wants results, the appearance of miracles, and wants everyone to keep in mind the limitations of the hospital. Thus making narrowing down maybe 40 or so people, so we hear, to 12? Well, that’s hard.

However, it is especially hard for Morgan since, unlike everyone else, she doesn’t necessarily have someone she is paired up with to deal with everything. Alex tries to be that person, but if there is one thing Morgan can’t stand is Alex going back and forth. He can’t cut her off one day, make out with his girlfriend in front of her, and then try to be her close friend a few days later. It’s annoying, confusing, and doesn’t help her mentally or emotionally.

As for everyone else? Many struggle with Dr. Osma’s belief in keeping a patient’s personal life out of it, but Dr. Lim falls in line. As for Dr. Andrews? He tries to adhere to the idea that what they are supposed to perform miracles to strengthen the hospital’s reputation, and with Shaun, he finds a case to put a patient on the board. But, after a certain point, Claire grows tired of this means of choosing people and presses for the emotional side to get a patient on the board. It doesn’t work, but it does earn her the respect of the doctor she bonds with in Guatemala.

Seeing The Struggles of Being A Doctor In A Different Setting

Watching shows focused on medical professionals and first responders can get very dull. Often because it can be filled with confusing jargon, high-risk situations that often end with no casualties or issues, and the characters you follow usually being exemplary. However, with the cast missing their fancy equipment, limited in the number of patients they can see, and having to learn new tricks to diagnose people, it shook things up a bit. Also, it reminds you how privileged Americans are, even if our healthcare system is expensive, that many can access a healthcare provider.

Now, is that universal in the United States? No. There are many rural areas likely with the same conditions as Guatemala, but that’s another story. What matters here is that the change in setting really felt necessary to keep The Good Doctor from being as formulaic as its peers, especially as it closes its fourth season.

Maybe I haven’t been paying attention, but do we often see Shaun’s thought process play out in graphics anymore? I don’t know about you, but since most of the medical jargon goes above my head, and the surgeries are usually just focusing on an organ that is hardly recognizable, seeing the process usually helped me understand what is being proposed.

Morgan Is Starting To Crack

Again, we don’t want Morgan to be with Alex, we’d prefer Claire. But with that said, one thing that we need from Morgan is to let down her wall. Said task she has shown, time and time again, is difficult, and outside of Claire and Alex, to a certain degree, she has rarely done so. Yet, it increasingly seems clear she can’t maintain being there for the joke and the sex, without also getting the intimacy, sad moments, and support.

In fact, a part of me was surprised that, as Lea mourned the loss of her child, we didn’t also get Morgan mourning the loss of her ability to perform surgery. After all, 2 additional people got the opportunity to be saved due to Dr. Andrews joining the trip. If Morgan could perform a surgery too, it would mean 2 more people, though I’m sure she’d argue 3 with her expertise.

But, it seems the writers want Morgan to move on from the most devastating thing to happen to her and instead bicker with Dr. Park over feelings she may have for him. Thus diminishing one of the best characters into a shell of her former self.

A part of me feels more could be done with Lea, but at the same time, this is a medical drama, and she isn’t a doctor. So while they could explore her grief more, it is also unrealistic. Yet, there is no denying the continuous representation of her grief is necessary and showing Shaun maybe not entirely over it, but allowing other feelings and thoughts to take priority. For in doing so, it reminds viewers how lonely the loss of a child can feel for women and the guilt which can come when your partner has so many things to stress about that you feel are more important than your own grief. Even if it is the grief of a child you shared with them.

When Dr. Lim is Claire’s mentor, I would say the main thing they share is being women of color. Beyond that, I wouldn’t say they are very similar. However, Dr. Saravia seemed more in line with who Claire is in terms of giving care with feeling, making it personal, and still being a brilliant doctor to boot. Which, considering Dr. Saravia’s seniority, I think may validate Claire’s methods, as shown in the room with Dr. Osma, and Dr. Saravia’s mentorship might be the most life-changing thing for Claire moving forward. The Good Doctor: Season 4/ Episode 19 – Recap/ Review (with Spoilers)
Trajectory: Plateau
While many shows try to open or close with major moments where a main cast member's life is threatened or some other big to-do, The Good Doctor changes the scenery, and in doing so, it creates a truly memorable experience that will definitely make season 4's ending stand out.
Highlights
Seeing The Struggles of Being A Doctor In A Different Setting
Morgan Is Starting To Crack
Lea's Struggles
Dr. Saravia Working With Claire
Seeing Shaun's Process Again
Low Points/ On The Fence
82
Follow Wherever I Look on Twitter and Instagram, Like us on Facebook, and Subscribe to the YouTube Channel.