Wherever I Look
Recaps, Reviews, and So Much More
Home TV Series The End of the F***ing World: Season 1/ Episode 6 – Recap/ Review (with Spoilers)
TV Series

With a murder already behind them, what’s a stolen car and robbed store but child’s play?

Table of Contents show
1 Gathering More Evidence: Eunice, Phil, Teri
2 What’s a Robbery Between Acquaintances?: Alyssa, James
3 Daddy Wasn’t There: Alyssa, James
4 Other Noteworthy Facts & Moments
5 On The Fence
5.1 Episodes Like These Make You Wish The Show Was An Hour
6 Follow Wherever I Look on Twitter or Like us on Facebook. 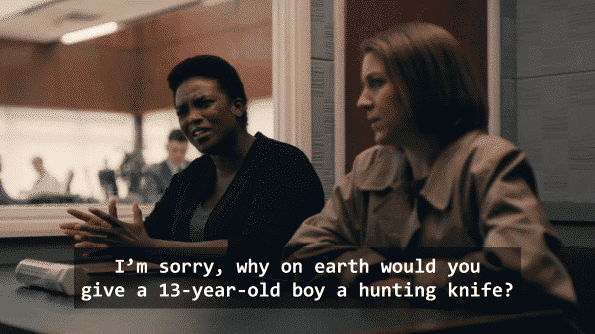 First things first, who buys a hunting knife for a 13-year-old when, apparently, the family doesn’t go hunting? Much less, do you really think it is all that smart to say, “Well, what he really wanted was a machete” to the police? You already know your boy is in trouble, why make it worse?

But, luckily for Phil, James may not get murder but instead manslaughter. If just because Clive’s mother hands over the video of what he did to his college students. Though considering James and Alyssa are not only on the run, but racking up crimes, not even Eunice may be able to help these kids eventually.

Now, cooking you can understand James learning because his dad eats rather unhealthy. As for why he learned how to break in and hotwire a car, much less why he knows how to cut hair, file that under stuff that would be nice to be explained – but likely won’t. And while the hair thing we could just point at his mom, I don’t know if we can look at Phil and say James was inspired by him.

Either way, after a murder, what’s a stolen car really? Heck, what’s stealing some gas? Which was the original plan for Alyssa and James, but then Jocelyn, being the type of person she is, got involved. Perhaps upset there was this young couple, in this rather fancy car, passionate and making out 8 in the morning. Jealousy really is a terrible thing, innit?

Unfortunately for both sides though, things go wrong quickly. For Jocelyn, she ends up locked in the back room because of her employee, Frodo, traps her back there. Then, sadly for Frodo, while he thinks doing Alyssa and James a solid won him a ride on their trip, he is sorely mistaken. As soon as he turns his back, Alyssa and James book it and leave him behind. Only to discover when they reach the last address for Alyssa’s dad, Leslie, he isn’t there. Some woman, Debbie, is, but not Leslie. Thankfully though, while Alyssa is ready to just walk away from it all, James asks Debbie if she knows where he went and it leads them to a trailer. One which, based on how the episode ends, seems to hold Leslie.

Episodes Like These Make You Wish The Show Was An Hour

Honestly, there isn’t much to highlight for this episode, and it is mostly because it feels like such a transition piece. One which really pushes you to understand why most dramas are an hour vs. a half hour. For while entertaining and all, especially the gas station scene, these cliffhangers man. And also, it just makes it seem like everything is done in bite-sized chunks. Which, in some cases, like Clive’s mom coming to terms with Eunice guilting her with revealing the truth, would we necessarily want to see her toil over exposing her only child? Nope. Yet, at the same time, with us hitting rock bottom with Alyssa and James, it would be cool to explore more how their relationship seemingly is healing old wounds.

Not to mention, is bolstering them in ways perhaps not thought as possible at one time.