With Alyssa making James feel things, he reaches a crossroad: Continue to explore what it is like to feel emotions again or kill the catalyst?

I Could Fall In Love, With You: Alyssa, James You know, while James still isn’t taking the initiative Alyssa would like him to, especially in regards to intimacy, he has other nice traits. He is cute and can cook! But then, when she gives him a peck, he goes for a full on kiss! So maybe there is hope here after all.

But, Then Again…: Topher, James, Alyssa 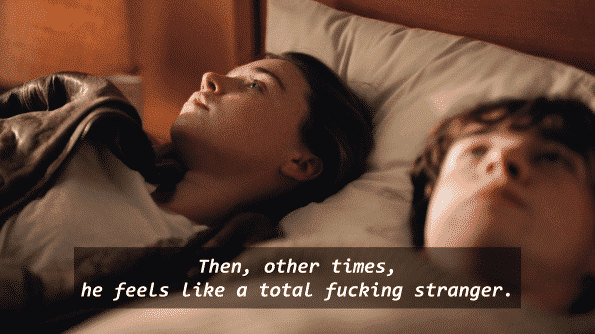 Anyway, with her mad about James being so easily put off, she finds Topher on the street and after making out with him, the plan was to have sex with him. However, as they were starting to get really intimate, she ended that experiment. Sorry Topher, it’s too late. James has already got under Alyssa’s skin.

The Things I Do For Love: Alyssa, James, Clive

James gets his wish! He got to kill a person! It just isn’t Alyssa but this dude named Clive. Someone who may seem to be your everyday professor, boring, studious, without much of a life, but really he is a creep. Be it someone into masochism or a murderer, as Alyssa recovers from the embarrassment of almost giving away her virginity to a stranger, she later on almost gets raped by Clive. Luckily for her though, with Alyssa so blatantly showing off Topher, in James’ face, he grabbed a knife for that triggered the idea that it was time to kill her.

After all, bad enough she has him feeling something for the first time since his mom died, but now she is trying to break his heart? Oh no, she gotta die. However, who ends up dying is Clive for James loses his nerve to kill Alyssa as he watches her sleep. She seems so peaceful that he lays next to her, on the floor, and just feels her hand. Then Clive comes in, goes from nice to creepy, and gets a knife to the throat.

“It feels like sex can go from something you want to do, to a punishment, really fucking quickly.” You have to love a show which reveals its characters onto us this way. James is not so much a psychopath but, and I realize I’m romanticizing, someone unable to deal with his mother’s death or absence. The kid we see laying on his mother’s lap became numb because his father didn’t foster the kind of environment where he could cry and let out all his pent-up emotions and frustrations. Yet, recognizing that wasn’t normal, he tried to figure out some way to feel again. First by sticking his hand in a deep fryer and then by killing small animals.

Though twisted, and fits the profile of a psychopath, as soon as we see James shiver when looking at Clive’s pictures, you know he is not about that murdering life. Much less the shock which comes from seeing Clive dead really hits that ball out of the park.

All James really needed was someone like Alyssa who reminds him what it means to be alive, to be love, feel affection, and being given a safe space to be yourself. Hell, I’d even say, like Alyssa, he could fall in love with her but while he is mentally and emotionally ready to cuddle and kiss, having sex, oral or vaginal, he is just not ready for yet. Baby steps Alyssa, baby steps.

What was the hole in the wall/table/whatever at the beginning of the episode? This stumped me.