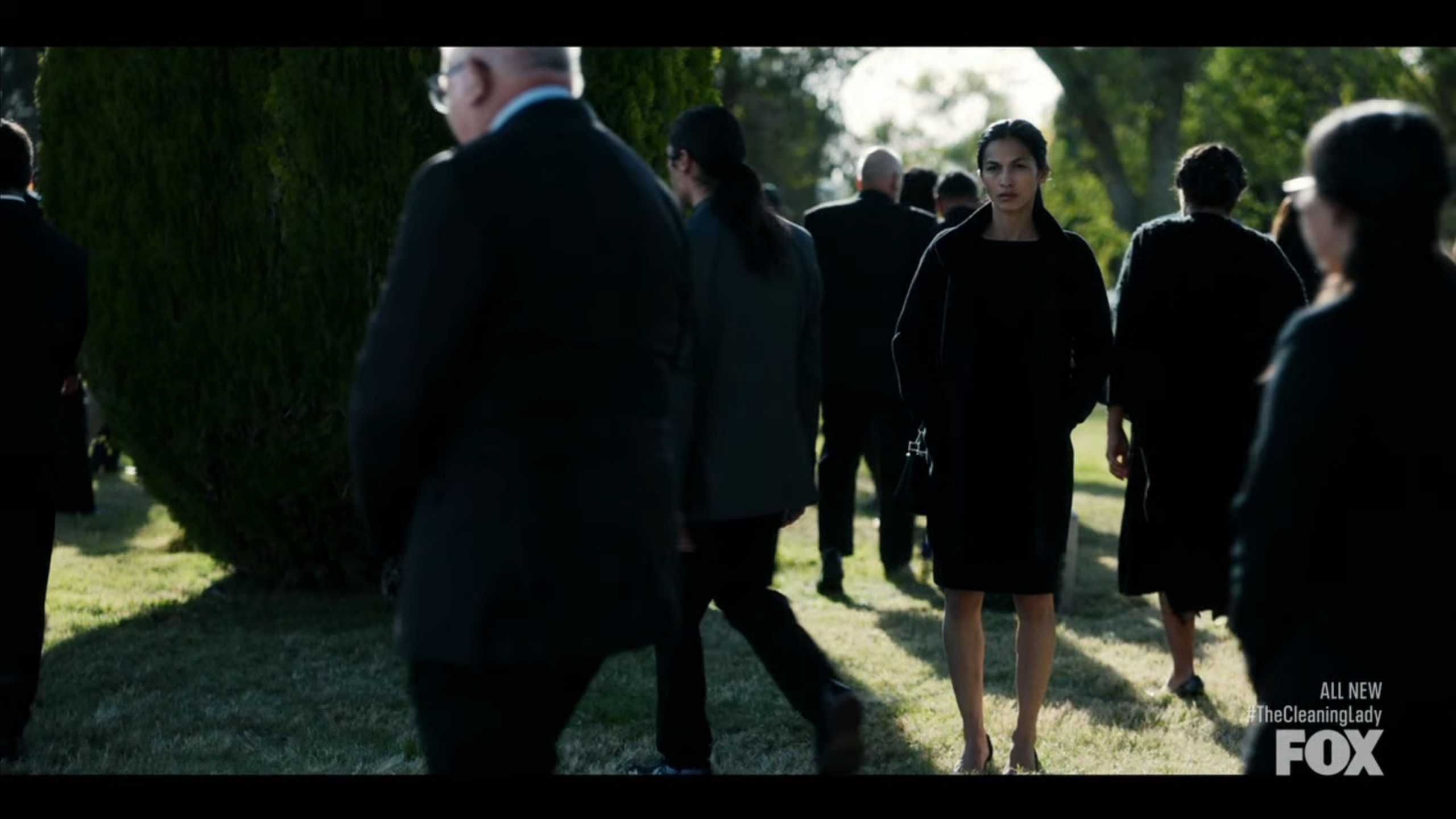 In the two episodes FOX is touting as “The Cleaning Lady” season finale, drastic measures are taken as Thony tries to have it all and fails to.

Luca gets a short reprieve which allows him to celebrate his 6th birthday. However, the next thing you know, he must be rushed into the hospital, and the timing can’t be worse. Robert intends to figure out what happened, for he has done everything he could to not suffer his father’s fate and die of heart disease by 45. Yet, no one can pinpoint the exact reason he nearly died.

Naturally, Nadia tries to dance around it, and when Thony is asked to give a second opinion, she leans towards being honest, which upsets Nadia. Especially since it pushes the needle in her direction. But, in Thony’s defense, she knows she is being tested. However, with Arman unable to rescue Nadia, this leaves her trapped and almost getting drowned when Robert thinks she could have killed him.

But, as shown, all Thony cares about is Luca, so she focuses on that. Hence she gets Arman to take her to where he re-routed Robert’s shipment. Which, because of Robert’s men seeing her with Arman, Thony destroys any relationship she could have had with Robert and a consistent flow of medicine for Luca and others. But, in her defense, the drug works and saves Luca. Albeit she has to steal medical equipment and get in a massive amount of trouble, but she does ultimately save her kid.

However, in exchange for saving Luca’s life, she gets herself, and Fiona arrested, and now child protective services is involved in Thony’s life. Well, at least that was the trajectory she was on. Garrett’s good timing gets Thony saved, but Fiona still ends up in jail, awaiting either deportation or Thony saving her. Now, for Thony to do anything, she had to deliver Robert, but it becomes clear that isn’t an option. Garrett and Russo don’t think it is a good idea and make it clear Thony wouldn’t have the FBI’s support. Also, Arman doesn’t think it is a good idea, for he wants to kill Robert and Thony’s unwillingness to let that happen with ease makes her a liability.

Yet, Thony knows the only way to get Fiona out of jail is for Robert to get arrested for something she can testify against, thus giving her leverage. So, against all advice and orders, she meets with Robert, and on sight, Nadia poisons the well and puts things in motion for Thony to be killed. And the funny thing is, she almost succeeded. Robert takes Thony to a junkyard, where he has what remains of the shipment that Arman attempted to steal. But, he makes it clear while Luca won’t be harmed, or Thony’s family, she has to die for repeatedly lying to him and lacking leverage.

Luckily for her, Garrett shows himself to have good timing twice, thanks to the FBI watching Robert’s penthouse and knowing something was going to go down. Also, with Garrett calling Arman, he shows up as well, and between those two, Robert can be associated with the drugs he brought into the USA, which included fentanyl, alongside Luca’s drugs. However, during the shootout between Garrett, Arman, and Robert’s men, Garrett ends up fatally wounded, with Thony being unable to save him as Thony, Arman, and Russo watch him die.

Being that Russo and Garrett were slowly but surely starting a relationship, she doesn’t have much love for Thony. She wants her statement, to get Fiona out of jail, since she doesn’t deserve to be another causality to Thony’s impetuousness and to wash her hands of Thony. But then Robert gets bail, and him not standing trial would erase whatever deal Russo could create, so Thony helps Russo and the FBI to get to Robert’s private hangar.

Sadly for her and Fiona, they arrive too late. Arman gets there first, with his men keeping Robert from leaving, and after he gets Robert on the ground, he gives Nadia his gun to finish Robert off. Thus, Thony loses her means to negotiate a way out for Fiona. Which, once Chris, JD, and Jaz learn of this, there are a lot of negative feelings. JD tries to keep a cool head, and Jaz is just bewildered as she is caught up on Thony being involved with the FBI. Chris, on the other hand, directly comes from Thony and holds her accountable.

Hence why Thony, with Arman’s help, decides to continue the work they started with Robert, so while Fiona may spend a day or two in Manila, she’ll be quickly brought back through Robert’s former pipeline to Manila. Now, how will Russo react to this? Never mind, with Thony getting in deeper and now in a boss position, what does this mean for her future? It’s hard to say.

All we know for sure is that Thony and Nadia benefited greatly from Robert’s death, and neither woman seems willing to step down from all they gained, with Nadia not even wanting to share La Habana with Arman.

Nadia Making It Clear She Inherited Robert’s Empire, Not Arman

After using Arman to set up Robert and killing him with her bare hands, Nadia makes it clear that what she gained from everything is hers. In that moment, you are pushed to question if this was part of a long game for Nadia, and while she suffered, she ultimately got what she wanted in the end. Leaving you to question what use Arman may be to her now and in the future?

Garrett’s death was a mercy killing. It thankfully stopped whatever he and Russo had going on, and it chopped off one of Thony’s lifelines that had repeatedly saved her. So now, with Russo being the main one who knows about Thony and Thony continuing down a path towards destruction, it is going to be interesting to see her try to sweet talk or negotiate with someone who may not fall for her using her son as a shield against criticism.

I’m glad Chris went off on Thony. JD didn’t want to do it, and Jaz couldn’t, but Chris seems to recognize a lot of the drama in his life, including killing Marco by accident, is because of Thony. Now, he doesn’t bring up Marco and how that affected him, but I think with Chris no longer seeing Thony as a victim but a chaos agent who is destroying nearly everyone’s life in his family, he may be worst than Russo could be. And considering Thony does everything she does for family, having one member of her family not trust her and who could potentially betray her will make Chris an interesting player in season 3.

A New Chapter For Thony

In our last recap, we thought Luca had to die for Thony to be let off this self-imposed leash. However, losing Garrett and Robert’s death may allow Thony to continue her journey toward the dark side. For while Russo could become a thorn in Thony’s side, her timing isn’t as good as Garrett’s. Also, Thony has learned, watched, and studied on both sides.

Take note; she knows the playbook of how the FBI seeks to take down criminals, how criminals operate their organizations, and how they avoid capture. Add in Thony’s ego and knack for always finding a way, and she will be quite formidable. This isn’t to downplay how she likely still has the desire to import drugs with good intentions, but as Harvey Dent said in “The Dark Knight,” “You either die a hero or live long enough to see yourself become a villain.” To us, Thony is within the first chapters of her villain origin story.

Robert Dying and Not Luca

Robert was growing on me at this point. Yes, he was a lackluster villain, but his personality was starting to put him in the realm of Garrett. Someone you didn’t like but felt like a staple of the show. Which is more than can be said for Luca, who, honestly, as cute as the kid is, is such a ball and chain.

Yes, he has been Thony’s motivator for nearly everything we’ve seen thus far, but I would submit while he is her motivator, there isn’t much of a reason for the audience to invest in Luca’s continued survival. He is but a shield for Thony to act erratically, far more than a living and breathing person. And I truly believe he is coming to the point of losing his usefulness in this story. So hopefully, the next time he gets ill, they kill him off rather than allow for yet another last-minute save.

Heck, Russo being the reason would be perfect so that Thony could go to war against the US Government.

The Cleaning Lady: Season 2 Episodes 11 and 12 [Finale] – Recap/ Review (with Spoilers)
Overall
While Luca may have emerged as a tumor that needs to be extracted from “The Cleaning Lady,” there is no denying that with two notable deaths and a shift in Thony’s attitude, “The Cleaning Lady” ends its second season on a high note. One that doesn’t just start a new chapter for Thony, but Nadia too, in ways that most of this season failed to do.
Plot and Dialog
0
Characters Development and Performances
0
Visuals and Sound
0
Pacing
0
Value For Intended Audience
0
Community Rating0 Votes
0
Highlights
A New Chapter For Thony
Thony Being Held Accountable
Garrett Dying
Disputable
Robert Dying and Not Luca
0
Subscribe to our mailing list