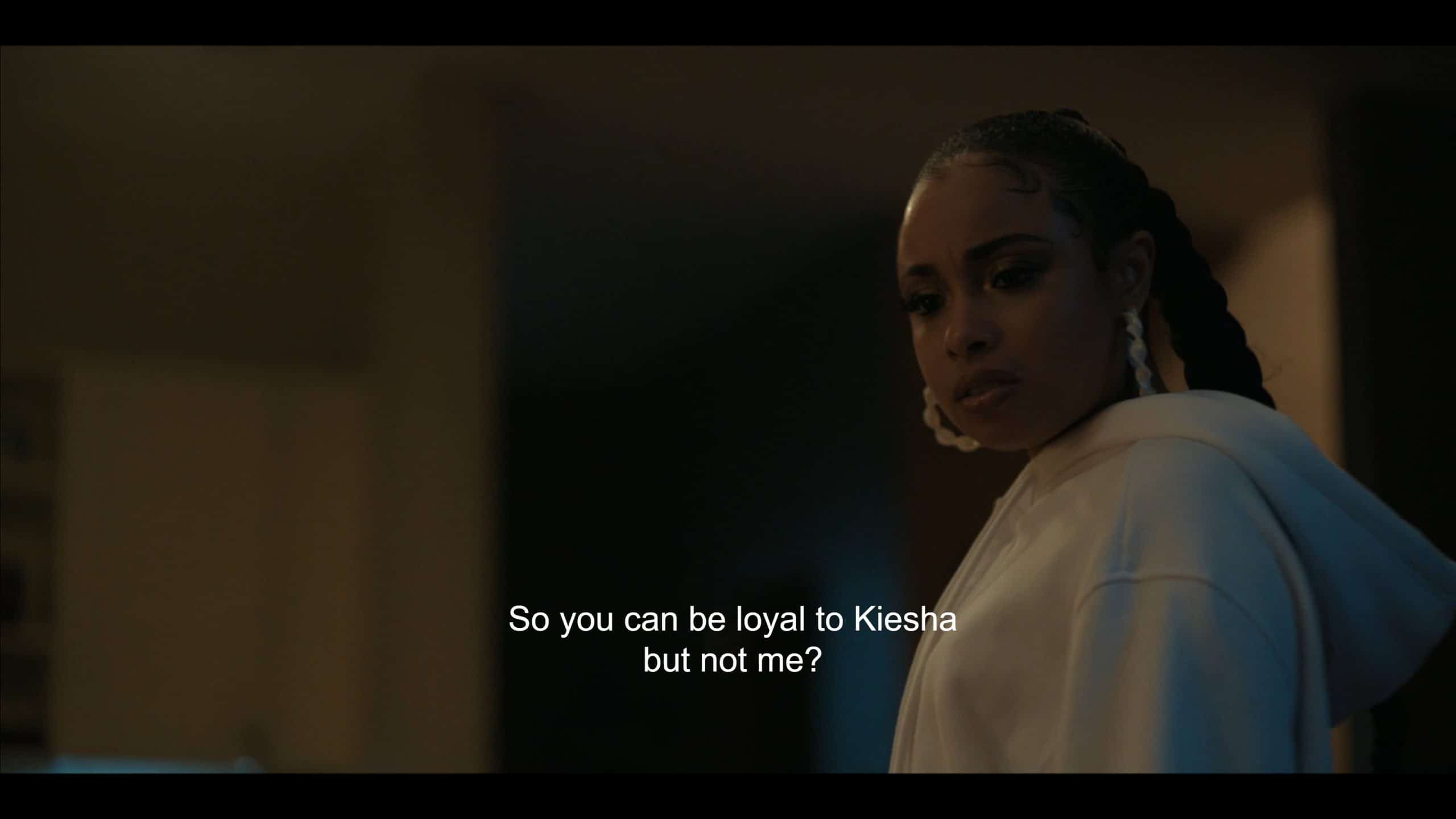 It’s Valentine’s Day, and for many, it is a turning point in their lives and relationships and coerces difficult conversations.

The Next Chapter Is Something Joyous – Papa, Bakari, Kevin, Simone, Lynae

It’s Valentine’s Day, and some, like Kevin, have prepared ahead of time. He bought a star for Simone, which she loves, but still makes sure to check on his bestie and let her know he is there for her. Which Lynae knows is true, without question.

But that doesn’t mean she wouldn’t like someone who got her on a level beyond what Kevin can offer or what she wants him to. Enter Bakari, who, under Papa’s tutelage, is opening up and learning how to communicate but also is pushed to be someone worthy of Lynae. First is him apologizing to Jemma and Jake about how he created the events leading to Jemma losing her baby. Something Bakari doesn’t want to do but is compelled to by Papa and Lynae for him to begin his next chapter.

Getting Past The Trauma – Jemma, Jake, Jada, Darnell, Emmett

While Bakari preps himself to apologize to Jemma and Jake, they’re mourning their unborn child and trying to figure out what’s next for them? Jemma feels forever changed, and Jake? He both wants to support his girl but also has feelings and exploration of loss acknowledged.

Alongside those two working through their trauma, so are Jada and Darnell. Thanks to meeting up with some friends from high school, a lot of Darnell’s dirt, from cheating on Jada with her cousin to ruining her prom, is brought up. But, in showing that she has truly forgiven Darnell, none of this creates an argument. Jada has moved on and has seen Darnell as a new man.

With this in mind, and keeping with the momentum, Darnell asks and luckily receives Emmett’s blessing. This leaves us with seeing Jada newly engaged and having all the reasons to feel bad for Suede.

Tiff refuses to move on. With seeing Emmett being all she wanted him to be towards Kiesha, it doesn’t matter that she has Rob and that he isn’t on a journey to maturity; he just is. It doesn’t matter Rob, and her don’t have a sordid history. None of it matters. Tiff is not getting the best of Emmett but rather being some extended stay clean-up woman? She can’t take it.

This is why, even after Kiesha extends an olive branch for there to be peace, Tiff tries to seduce Emmett. Yes, it is partly to test if he has truly changed, but also because she wants this man he seemingly has become that she should have had.

But Tiff isn’t the only one having relationship problems on Valentine’s Day. Victor is struggling to try to keep his thing with Fatima going as he pushes out, more and more when they can be official and not something on the side. Meanwhile, Tierra, who is still with Roselyn, doesn’t get the quality time she expects from her and leans more on Victor and his world. This becomes a problem for Deja as she thinks Shaad has a crush on Tierra, and in his defense, he notes he was locked away for a decade, so he has a crush on everyone.

That was the wrong answer, and so Deja walks out. Now, whether they are done, broken up? That is hard to say. The only thing we know for sure is with Victor with Fatima, Deja gone, and Tierra not wanting to go to an empty apartment and be alone on Valentine’s Day, she joins Shaad in the basement, and one thing leads to another.

The Pursuit Of Tough Conversations

As shown by Tiff, it is much easier to go off on someone and storm off than be confronted with how you make someone feel after you express yourself. But, as much as we’re pushed to take note of Emmett’s growth, there is a need to recognize Tiff’s potential lack of growth. She adjusted to being in something messy, complicated, and volatile, and now not existing in such an environment is uncomfortable for her.

Hence her picking fights with Rob and trying to stir the pot with him. After years of mistreatment by Emmett, that is what’s normal for her, and Rob presenting the idea of letting go, talking things out, and being mature? It’s a night and day switch for Tiff. Add on Emmett is being all she has ever wanted towards Kiesha, her best friend? Never mind everyone making Tiff out to be the bad person for not being cool with this too? It’s a lot.

Papa Returning To His Roots With Bakari

But, Tiff isn’t alone in struggling to adjust. Bakari is just as much used to a certain level of dysfunction, pushback, and fighting, and with Papa not engaging that side of him, there is nothing to fuel that toxicity in him. Rather, Papa, reminding us of who he was before the Pulpit, does as Rob does for Tiff. He challenges Bakari’s way of thinking in a way that disarms him rather than giving the appearance that Papa is presenting a call to action.

Due to that, ideas like approaching Lynae romantically, accepting responsibility for Jake and Jemma’s kid dying, or even apologizing are accepted. For a lot of the time, it isn’t the message but the delivery that trips people up. Papa’s handling of Bakari exemplifies that.

Lynae has had a hard life. That has been established since we met her, but you can see it taking a turn. Kevin is a solid person in her life, and her saying that she knows Kevin has her back was the sweetest, lowkey moment in the episode. Then when you add Bakari revealing himself as her secret admirer? Her smile and joy can only be second to when Maisha has the same reaction to her accomplishments or recognition of how talented she is.

Tierra has been growing on us, and so has Shaad. Tierra, who is Roselyn’s boo, has provided Victor insight and the opportunity for growth beyond being someone cute on his arm with political ambition. So with that in mind, there was hope we’d see Tierra’s life outside of Victor with Roselyn or even crafting her life after Victor wins or loses.

As for Shaad? Between Deja, his work with Bakari, and being Victor’s right hand, he too has shown there is far more to him than you may have originally thought. But with the potential removal of Deja and pairing him with Tierra? So comes the question of whether joining these two characters is the classic case of the writers not knowing what to do with them, so pairing them was the solution, or if they’ll still maintain solo trajectories, but now with a complicated romantic dynamic.

It’s understandable that no person wants to be a clean-up woman. You want to be the Kiesha or the Jada, getting the person who has matured, got all the madness out of their system, and are ready to settle down and do right. Heck, even better, you want to be the Tiff with Rob, who hasn’t done you dirty and you can have a clean slate with.

However, it’s hard for Tiff to look at the gift that is Rob in the eye because he challenges her in a way that makes her uncomfortable. As noted above, he doesn’t enable the worst in her; he questions it. He makes her think, modify herself, and break out of this mold hardened by the BS Emmett put her through that, after so many years, has become comfortable for her.

But there is the problem – comfort. She has gotten so used to the backstabbing, the yelling, the makeup sex, and all the chaos involved in relationship drama that if she was to get better, it seems she thinks she deserved that from Emmett. Similar to Jada, she wants to see the fruit of all her emotional labor. So Kiesha benefiting from all the pain she had to go through so that Emmett could learn how to be a loyal and good partner? For him to not make attempts but show real effort? Damn, if Kiesha had a history with Emmett too! Tiff got married to him, had a child with him, and spent a good part of her youth waiting for him to do right.

So we can only hope, rather than sit and let all the pain fester, Tiff remains cordial with Emmett for the sake of EJ and cut off Kiesha. Because, for some things, a person can become more mature, grow, and get over. However, with this Kiesha and Emmett thing, I think this is something that is messing with the core of who Tiff is, so all that Rob is talking about? He can keep that.