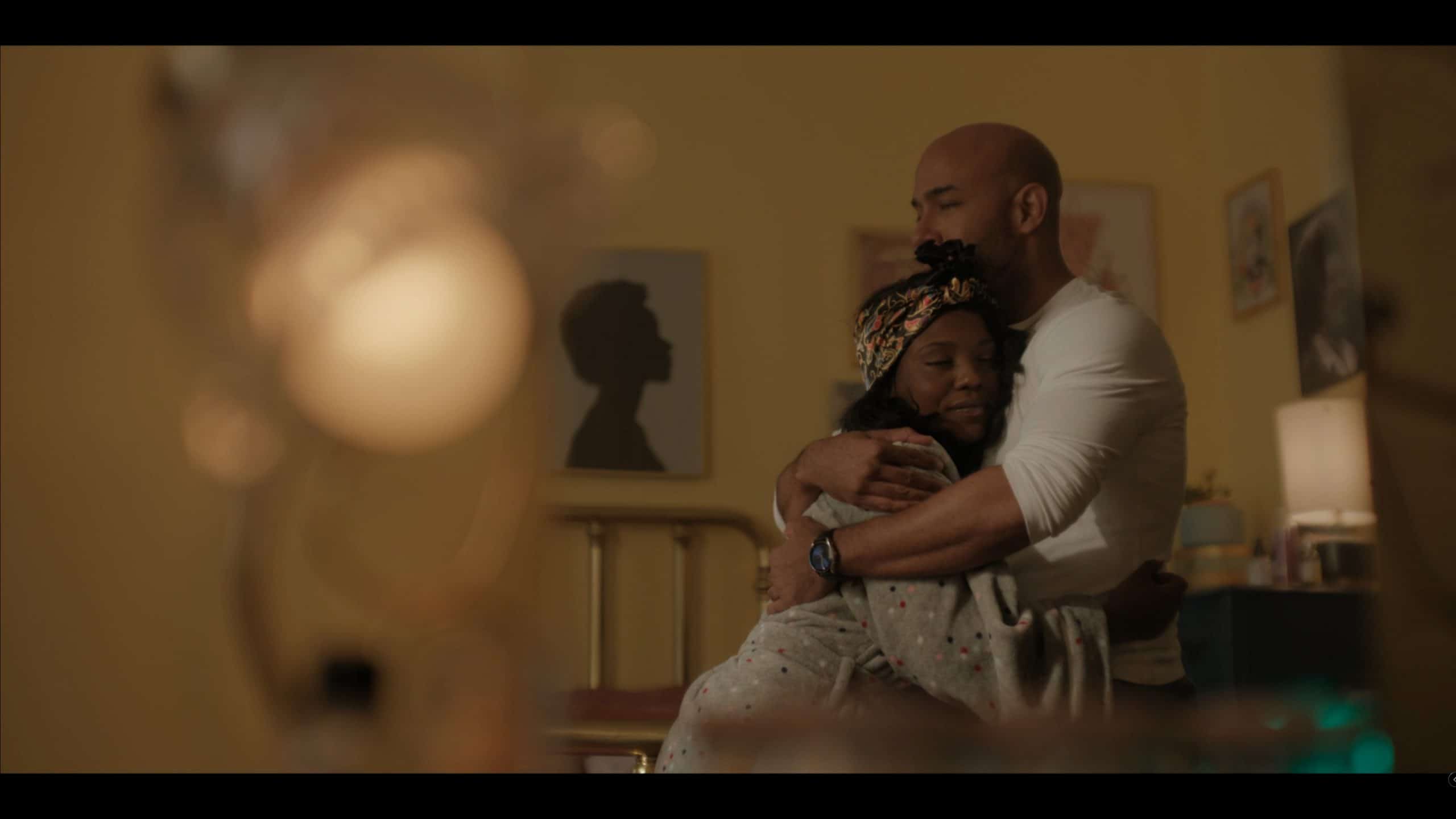 "Jemma and Marcus embracing one another," The Chi, "Angels," directed by Cierra ‘Shooter’ Glaudé, 2022, (Showtime)

It’s a hard episode for some as Kiesha is at her wit’s end, Jemma goes through something traumatic, and Bakari’s situation becomes unstable.

Kiesha is going through it. Her baby is always crying, and the people next door in her dorm are blaring music, possibly to drown out her baby’s crying, and because of that, she is ready to quit. Not move back in with her parents level quit, but something has to give. So the idea is that she’ll move in with Emmett and pool their resources, which he isn’t again. The only thing is, that Tiff is still in her feelings about those two and isn’t trying to mend bridges yet. But with EJ needing extra help and Kiesha potentially having the time to do so, maybe he might be the key to old friends reconciling?

As all that happens, the cat is out of the bag regarding Jemma being pregnant, and with that, Victor focuses more on how this could affect his campaign than how Jake feels and how to support him. Tierra points this out and even reveals she grew up with a young mom, which was new information to Victor. But, considering Victor doesn’t have heart to hearts with Tierra, how would he know?

Now, as for how Marcus is acting? At this point, he would support an abortion or Jemma giving the child away. But with her talking about raising it, he just accepts her decision and prepares for the ride.

That’s What Friends Are For – Kevin, Lynae, Simone, Jemma, Maisha

Speaking of Jemma, she is getting Maisha together for her first solo performance by helping her with her stage presence. Maisha quickly adapts and kills it on stage.

This leads us to Kevin, who is starting to learn how to manage his friendship with Lynae while dating Simone, and because of Simone, Kevin finds himself finding his perfect match. She is not only supportive but also makes friends with Lynae and pushes Kevin to show his appreciation for Lynae, considering all she has done and is to him. But, at the same time, she starts to pick at that chip on Lynae’s shoulder to help her understand you can ask and appreciate help.

While Maisha kills it on stage, unfortunately, Papa brings Bakari to the performance, and because the security guard gave him a hard time, Bakari decides to pick a fight, shoot off his gun, and cause mayhem. Because of the mayhem, Jemma is knocked down, potentially tramped a little bit, and with that, she loses the baby.

As you can imagine, Jake is pissed when he hears not only about losing the baby but Bakari being the cause and Papa bringing him to the set – thus furthering their issues.

But, on a lighter, Shaad meets Deja’s people, and while he gets grilled a bit and has to play down going to prison, by the end of the night, he speaks his truth and earns Deja’s parents’ respect. Now, as for her sister? Maybe, maybe not. But between him and Deja, she was put in her place.

What Simone Brings To Kevin and Lynae’s Life

Simone is the best type of disruptor. Yes, she may come off weird, and when it comes to crystals and her obsession with the moon, Lynae and Kevin aren’t gaining a sudden interest. However, her optimism, encouragement, fostering communication, and more, is something that Lynae hasn’t been exposed to. Then with Kevin, Papa, at one time, was a religious version of Simone, but he lost his way.

Thanks to Papa’s pulpit, Papa is no longer that influence in Kevin’s life which encourages growth and harmony, not to mention gratitude. Simone now is that presence, and considering how she made sure Lynae became integrated into Kevin’s new circle, rather than get left out, it shows a level of emotional intelligence that isn’t common amongst the majority of the characters on “The Chi.”

Shaad And What He Represents On The Chi

Forever one of the things that we’ll love about “The Chi” is that, while it is set in an urban area, it isn’t solely focused on crime, drugs, cops, and politicians. It’s more about everyday life, ranging from trying to learn how to be with someone who is different from you or has a bit of a complex situation with their ex. Also, there is trying to figure out how to make your dreams a reality considering your current circumstance. If not, like in the case of Bakari, balance being vulnerable enough to let people in but tough enough so few will try to test you.

Shaad is perhaps the best example of how “The Chi” wants to further the narrative by looking being the superficial or glamorized parts of urban archetypes and diving into what else they can offer. Shaad was locked up, was homo-averse at one time, and was a very angry young man. But look at him now. Even before Deja, he found peace and it was thanks to Victor taking him in and not giving up on him. And based on how Bakari was acting, you can see the transformation Shaad went through, Bakari was beginning because he was given the things and people he needed to feel like he had purpose and community.

By no means are we making light of what happened to Jemma towards the end of the episode, but rather us getting something different regarding abortion. Like Kiesha, Jemma decided against the practice and wanted to raise her child. However, unlike Kiesha, Jemma’s baby was born out of lust mostly, but in a relationship where there was some form of love.

Now, there comes the question of what’s next and what kind of damage has been done? Never mind Jake getting revenge, there is the question of how he’ll be there for Jemma, how will this play into Jemma wanting to work with Maisha, and how does Jemma mentally and emotionally recover? What happened was traumatic and could potentially redirect how she wants to live her life. So whether she stays the course or decides she wants the hell out of Chicago should be interesting to see.

Kiesha is an unwed, single mother who is going to school, avoiding relying on her parents, and making a way. A lot of the time, when we hear about stories like this, it is after the child has grown up, the story unravels in a movie, or it is similar to what was seen in “The Secret Life of the American Teenager.” Again, this is what makes “The Chi” different. It is exploring not just how multifaceted Black men are, at all ages, but women as well.

Kiesha, throughout 5 seasons, has gone through so much. She has been a track star who was a bit naïve and manipulatable. She went through a great amount of trauma and survived. Kiesha experienced pregnancy, early motherhood, working a job she hated, and even being with a nice guy without a nefarious agenda.

All of that is just an overview, and considering it is rare for one character, especially in an ensemble, to go through that much and not only survive but thrive at times? It’s worthy of applause.

The Chi: Season 5/ Episode 7 “Angels” – Recap/ Review (with Spoilers)
Overall
With many of the characters who can make the show drag a bit absent, “Angels” is a speedy and enjoyable episode.
Highlights
What Simone Brings To Kevin and Lynae’s Life
Shaad And What He Represents On The Chi
Jemma’s Storyline
Kiesha’s Storyline
Disputable
82
Follow Wherever I Look on Twitter and Instagram, Like us on Facebook, and Subscribe to the YouTube Channel.