Jerrika and Brandon’s relationship gets tested as Ronnie learns he will be paying restitution for a long time.

Jake is still being a pain in the behind about school, especially now that he has a 63rd street tattoo and wants to get integrated more into the gang. Something Reg isn’t for but not because he couldn’t use the help. Particularly since Detective Toussaint brings in Reg’s lieutenant for some silly charges. Which undercuts his money, but it isn’t so bad he’d put Jake on a corner. He does try to throw some 14-year old under the bus, but even that doesn’t take since Detective Toussaint wants real answers out of Reg over who may have hurt Miss Ethel, not some kid being used as a scapegoat. 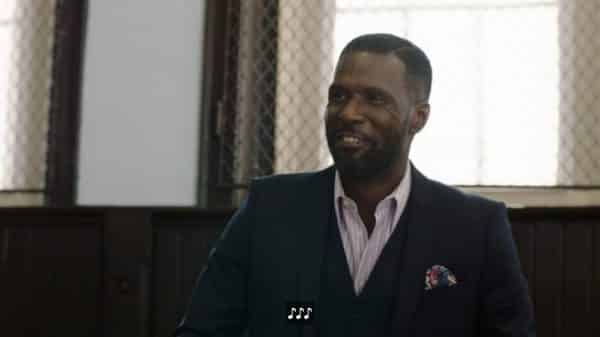 But even outside the Miss Ethel issues, there are other things going on. Take Douda, known to the kids as Mr. Perry, the pizza man, not liking how Reg hired the same people who assaulted Miss Ethel and how that is bringing them attention. Also, there is Jake continuing to push the kids who are part of the Wild Boyz at school. Thus leading to a food fight, on picture day of all days. A day in which Papa comes in looking like he stole Biggie Small’s wardrobe and luckily making it out the food fight without a touch of liquids or food on him.

However, he gets upstaged by Maisha who strolls in, midway through the school day, looking fly and leaving Kevin so dumbfounded you’d think he is in love. Which is perhaps the high point of his day for he learns, later on, he missed the chance to see his dad for the last time. For, during his dad’s visit with Keisha, that Kevin was invited to, he had a heart attack and died.

Thanks to Emmett still not cleaning the grease trap, Sonny’s catches on fire and is condemned. This means no child support money and the possibility of Emmett going to jail. So, he tries to talk to Tiffany, and while she isn’t ready to pop him in the head, or give him some again, she is willing to work with him. Heck, she even lets Emmett see his kid. However, money remains a major issue.

So, he gets into the hair hustle, and promptly Darnell shuts that down from happening in his house. Leading to him heading to Brandon with an original deal of working outside Sonny’s with 20% given to Emmett – that’s rejected. However, with Brandon almost ending up in accidents trying to prep the perfect dish and work, he lets Emmett work one day, and it goes well. Outside of Emmett selling hair and tacos which raises a red flag. 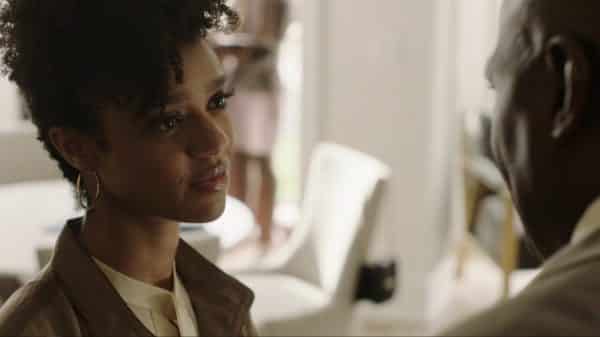 Leading to what could be seen as a major conflict: Jerrika dealing with Ms. Brown, Alderman Boner, and Brandon. With Brandon, she is trying to be the supportive girlfriend when it comes to the cooking thing and Ronnie getting on, but she has her own stuff too. With Ms. Brown, she got a major opportunity, but with Ms. Brown not wanting low-income housing part of the situation, Alderman Boner steps in. He even tries to dress down Jerrika who doesn’t snap at him, but does offer a clapback. One which doesn’t fix, or help, protestors coming and making it so showing the units can’t happen. Never mind Ms. Brown showing she may have a drinking problem.

With Ronnie out, he first visits his grandma who is happy to see him but Jada? Not so much. You see, the problem is that Ronnie got out on a technicality so the community isn’t fond of his sudden return all that much. Someone even spits in his face. However, he is trying to pay restitution. Maybe not to the community but at least to karma. For example, he helps Tracy clean up and leave the house, as well as see her grandbaby. Thus lightening her spirits after a trying few months, if not longer.

What you have to love about Jerrika and Brandon is they give us everything you’d want from a fictional couple. They got drama, individual lives, they fight over basic stuff, and are still having some good ass sex. Which is why, from the beginning, these two have been a driving force in watching this show. I know many have an issue with young children feeling themselves, especially if they got some meat on their bones. However, there is something about the complexity Papa and Maisha are given which makes it seem they have the oomph to have a little web series on the side. Something I recognize isn’t likely to happen, but they do seem to be too big for the minimum amount of screen time they are given. Heck, both, at this point, are the kids to watch.

Jerrika Got A Moment In The Sun

Up until this episode, arguably Maisha was one of the most developed women on the show, and she is still a child. However, Jerrika has been given more solo time, and with her going toe to toe with Alderman Boner, it was a moment of recognizing she is that lady on multiple levels. How she handled Ms. Brown in the last episode, how she handled Alderman Boner, and how she likely put Brandon’s ass to sleep? Who do you know better?

One of the things you have to love about the Tiffany and Emmett situation is how it not only plays out how Jada and Darnell likely were when they were younger but many couples with kids. Yet, in play is also how much communication needs to play a stronger role in co-parenting and relationships. Especially since, as Tiff says to Emmett, their problems, like Jada and Darnell, and so many others, likely never dealt with the sex. It was conversations, or lack thereof, before and after.

So to see these two deal with their stuff, partly due to Darnell setting an example, it makes you hope Tiffany is the first of many baby mamas that Emmett reconciles with.

While Coogie’s murder will forever haunt Ronnie, it’s hard to not admit he is in the process of saving Tracy’s life. Tracy seemingly was beyond the comical way of calling someone a hot mess. She seriously was going through it, outright depressed, and Ronnie may have truly been the only one capable of being able to break her out of it. He is the only one who has known Jason most of his life, has been around Tracy during the ordeal, and while he messed up bad, it seems his pursuit of redemption is helping Tracy see hope.

Plus, like with Emmett and Tiffany, there is a reminder of how both sides need to talk. Listen too, but if it is just back and forth jabs and no one takes a resting period, there will be no progress.

How often, previously, was Keisha and Kevin’s dad mentioned? Did we ever physically see the man? In my mind, after the leaps Papa and Maisha made, this plot was made to try to snatch some attention back to Kevin. However, this felt so rushed and cheap. I can only roll my eyes.

The Chi continues to seem like a battle for supremacy, and I’m not talking about cops vs. gangs or gangs vs. gangs. Each character is getting developed and pushed to the point they barely seem like they are part of an ensemble but a lead character who keeps getting undercut. Making it so the show is beginning to crack past being great for what it represents of Black culture and being great period.

I think perhaps, the storyline about Keisha and Kevin’s dad was used to set the stage for a future storyline. Kevin clearly has daddy issues which were not revealed until this episode. I was uncomfortable with the attention and comments Mr. Perry (Douda) directed towards Kevin. I think some sort of father/son relationship could be in play which portends bad news for Kevin because Douda is pure evil.