The Chi: Season 1/ Episode 10 “Ease On Down The Road” [Season Finale] – Recap/ Review (with Spoilers)

The Chi ends in a polar opposite way to how it began. There is peace, little to no drama, and rather than focusing on endings, it is all about new beginnings. Though not necessarily of the positive kind.

With Reg bringing him in, Quentin has one last one on one with the young man he put on. In it, he reveals how he killed the reason Quentin went away. Just so things like Trice, Reg, or some other pinhead, wouldn’t hurt or kill his son to get to him. Yet, without trying, they still found a way to involve him. So, when it comes to Trice, Quentin lets his new friend Reg handle the execution and since Jake wants to be so nosy, he lets him see the body after it is shot. Following that, Quentin deals with Detective Wallace who may not have shot Jason, but did put his foot on his neck and choked him to death. So, for poetic justice, just as Jason choked, Quentin slices Detective Wallace’s neck so he chokes. Thus ending that saga and leading to Reg becoming the new boss on the block.

Leaving the kids. The musical goes well, outside of Andrea not being the most coordinated, but there is still a lot of worry about Jake. Which only leads to Kevin and him having their tempers flare up. But, at the very least, Papa is still cool with Jake and with a whittled cross and a hug, he tries to keep the lines open for future communication.

And speaking of keeping lines of communication open, Kevin apologizes to Maisha and she appreciates it. Also, she lets him know she no longer got a crush on him but her eyes are on Papa. Someone who signals that there ain’t no way in hell.

There was some hope that when Jake saw a dead body for the first time, freshly killed by his brother, that would be the wake-up call he needed. That would be what scared him into school, maybe taking Kevin’s offer to stay with him, and refocusing on having a normal childhood. But, I guess it was the opposite. Being able to handle seeing a dead body might have made Jake feel he could be about that life.

Yet, considering how Reg still wanted to keep Jake from seeing a lot of that, I guess despite his gang banging ways, he still sees his brother as a kid. Maybe even wanted him to keep his innocence a bit. Though, considering how he talks about sex, maybe it is just he didn’t want Jake to see what it is like to kill someone or see a dead body just yet. For while he pretty much coerced Jake into the gang life, taking a cue from On My Block, it could be about more than meets the eye.

Leaving Quentin. His revenge is complete, Reg is now heading up Trice’s gang, so what is left for him? Like Jada, may he move on and not be seen again? What’s next for the OG? Sonny wants no parts of him so will he just continue to be a surrogate dad to local youth like Emmett? Especially considering his new situation?

Oh, and just for kicks and giggles, did Reg even shoot Trice? Did Quentin confirm the kill? Things get fuzzed out for us so it isn’t clear if Trice died or it was made to just look like it so he could go into hiding.

The Job Of a Father: Emmett, Tiffany, Jada

Emmet learns Tiffany and her boyfriend have an abusive relationship. One where she beats on him, he beats on her, and EJ just cries through it. Thus prompting him to take EJ, in the midge of Tiffany and her man fighting, and talk about getting custody. Something Jada notes will be an uphill battle, but she says her son can handle it.

With Emmett talking like he isn’t going anywhere, so comes the question of how he’ll financially support himself. His sneaker hustle went dead, Sonny isn’t going to be able to pay him a living wage, and soon he’ll have to worry about rent money. That’s on top of court fees and worrying about getting his behind whooped if he goes for custody. Really pushing the idea, with Quentin done with the drug game, having a big empty house, and maybe wanting to experience want it means to raise a child, he might just take Emmett in. For you gotta recognize, Q is kind of a lonely old man in a way and with Jason dead and gone, just as much as Emmett could use a surrogate dad can Q use a son. It’s perhaps the only way he may gain a sense of closure since the violence may only be a cathartic release.

Just when Laverne is ready to sell the house and move on, Detective Cruz calls and lets Brandon know of Ronnie’s confession and that shuts everything down. Laverne wants to stay and see justice for her Coogie. Damn $5,000 over their asking price and whatever money Brandon was banking on. She needs closure.

Unfortunately, though, while a lot of storylines wrap up for characters, Reg comes around to Brandon’s truck to remind him things aren’t over between them. In fact, with the block being hot, and a favor owed, it seems that truck may make a good front for some business. Not even money laundering but selling.

Leading to what may be the only sign Quentin may be in for another season. Detective Cruz, the outlier of the show, is tasked with investigating Detective Wallace’s murder. Meaning the mostly clean cop is going to be head to head with the baddest mother on the show. Here is hoping Q can makeup for Detective Cruz’s lack of presence. 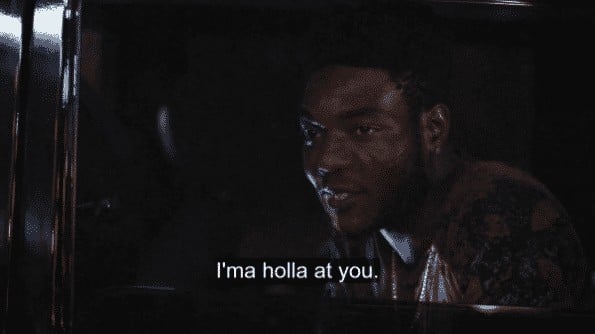 Man, Brandon cannot catch a break. If it ain’t him worrying about Jerrika and this dude at her job named Marcus, it is Reg collecting a favor or Laverne saying she ain’t selling the house yet. Though the real trouble could come if Ronnie keeps opening his mouth. He is naming names like Kevin, Meldrick, and surely will be naming Brandon’s soon too. It seems everyone is going to be named as he seeks out redemption and damn what life Ronnie will have on the inside because of it.

Which of itself should be interesting. Clearly, he is not going anywhere but it would be foolish to think we are only going to see him in the courtroom. So I guess as we no longer will see his friends or grandma, their screen time will be replaced with new friends. Perhaps some Muslims ones because, otherwise, it seems Ronnie is going to get chewed up and spat out. And I want to assume, during his chats with Rafiq, Ronnie had to get somebody’s name on the inside.

Though perhaps the biggest worry here is Detective Cruz. Throughout the entire first season, he has had little impact. He wasn’t a character you were pushed to know better or have any type of feelings toward. He kind of seemed dead and middle of the road in comparison to the cast of character we have gotten to know. So I truly do hope that with him likely playing off Q and getting to be a bit more part of the main fray, between the writing and actor, things step up a bit.