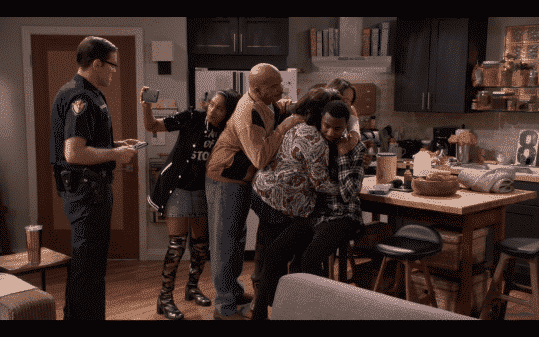 It’s the infamous mass shooting episode and, honestly, it kind of disappoints.

Jerrod escapes a mall shooting and while he wants to downplay, naturally Bobby doesn’t. As usual, he has to make things about him, post it to Instagram, and try to feed off whatever Jerrod is given. Of which, everyone is trying to impose some kind of victimhood. Something Jerrod rejects but Bobby tries to take on. First, because he would have been a victim’s brother and then through the idea that if he would have hung out with Jerrod, he might have gotten shot.

Bobby is a 32-year-old man. Someone who, due to the format of this show, I can’t say whether he has a job or life, but I am increasingly worried about Bobby. Especially as Cynthia notes how she didn’t push or tiger mom Bobby or Jerrod so they wouldn’t have to deal with the stress and pressure. Much less, not have issues like their dad who seemingly talks to the moon in the middle of the night to deal with his issues.

But, at this point, I just really need this show to be consistent and have some kind of growth. For despite this show premiering out of order, you’d never notice. Which sort of seems like something which should be a problem. Being that Maxine has a psych degree, naturally, she is the one leading the push for Jerrod to open up. However, he doesn’t truly do so until it is noticed he got some blood on his hoodie. Well, at least that was the trigger. What really forces Jerrod to open up is because the cops saw Bobby’s post so they want to question Jerrod.

This leads to the show touching on the topic of Black people not trusting the police, even those like Maxine, and then the true story. One in which we learn Jerrod was but a step away from being killed. For he was just getting a pretzel or trying to, but the people in front of him were taking awhile. So, seeing that Jerrod knew what he wanted, the boyfriend of the two let him step ahead. Moments later, that guy is shot, Jerrod is behind the kiosk and eventually out of the mall. It sucks to me that really, the only consistent thing, trauma-wise, will be Joe’s issues with his dad. Outside of that, nothing is really consistent here. I mean, just to make a short list: Have we heard anything about Maxine and Jerrod’s engagement this season? What about Bobby’s superintendent job? How about Maxine working or even Jerrod?

I mean, I get this show is a half hour so they are limited in what can be done. However, those limitations are becoming real liabilities. Especially when the topic isn’t a home run and there is no arcing storyline to fall back on. 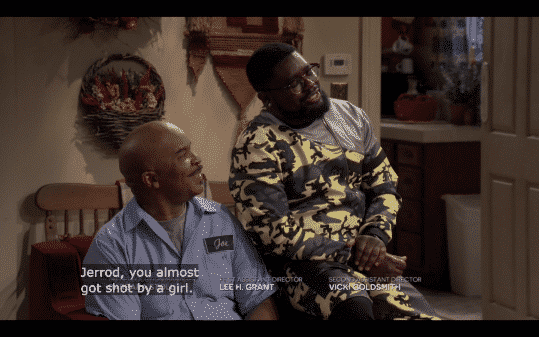 Naturally, when Joe hears about a shooter he thinks ISIS, a racist white person, or a disgruntled and stressed out Asian person. Yet, lo and behold, it was a white woman. As for her reasoning, that isn’t revealed. However, with 4 dead, including the shooter, it seemingly wasn’t just a cheating boyfriend or something like that.

This is perhaps another example of why this show being a half hour is kind of infuriating. Never mind the whole inability or decision to not build upon past topics or storylines. What really is an issue, to me at times, is that some topics kind of get thrown in that deserve their own episode and get rushed through. Like Black people distrusting the police. One thing I noticed in this episode is that it seems Jerrod and Maxine don’t make it a habit of telling people to close the door and they seemingly don’t lock it either. With that, there is this vibe that eventually they were going to get robbed.

Making the episode use Black people’s distrust of cops this episode a wasted opportunity. For I can tell you right now they won’t revisit the issue. Even though it would make such a good and divisive topic, one and done is how this show operates. Probably to its own disadvantage. Also, they could have really played off of Joe’s assumptions of what a mass shooter is by default and brought up the DC sniper, among others. Maybe even argued how white killers are humanized while Brown and Black killers get demonized.

In general, this increasingly is seeming like a season of missed opportunities.