The Beguiled – Summary/ Review (with Spoilers)

Some time ago I said that the only reason I would head off to NY for a movie is if I was absolutely sure it would be worth the trip. Needless to say, I didn’t think The Beguiled will be worth it. Especially since, in a rare indie showing, it became local to me the following week. Now, as for whether I delayed the pleasure of seeing this movie or not? Well, check below.

It’s 1864 Virginia, while the civil war wages on, a group of women press on. For while the explosions and smoke rise in the background of their lives, they remain far enough to be detached. That is, until Amy (Oona Laurence) brings home a wounded Yankee soldier named John McBurney (Colin Farrell). Someone who the younger girls, like Jane (Angourie Rice) and Alicia (Elle Fanning) are all but ready to curse and fear. Yet, for Miss Martha (Nicole Kidman) and Edwina (Kristen Dunst), there is a kinder approach.

For while there is a question about what the Christian thing to do would be vs. their safety, Miss Martha is the one in charge. After all, the girls are within her home. And you know, while a deserter, John shows himself to be a charming fellow. You could even say many of the women, perhaps sans Miss Martha, become openly smitten with him.

However, while all seemed good for a time, then John falls prey to the weakness of all men: his ego. Thus leading to quite a few outbursts and lies to cover up a horrible accident. One which turns this charming man into a monster. One who, even at his worse, seemingly Edwina thought could be her savior.

Period pieces produce the general fear of being long winded and too into their own cinematography. Thus making what could be, like The Beguiled, a 90-minute movie spread into two hours. But, thankfully, the film keeps a rather tight ship. From meeting Corporal McBurney to the women reasserting control over their home, the time flies.

Nothing About It Leaves A Lasting Impression

While it tickled me to watch a coy Edwina with the ever-charming John and the ladies opinions to change from cautious to smitten, to worried, in the end, I wasn’t left with much. You aren’t given some sort of wowing performances, funny lines or moments, or anything truly worth talking about. As can be seen in the archives, I’ve seen a good part of each actresses’ work and let me tell you, it sort of seemed like they were dialing it in.

Not to imply they were being lazy or anything like that, but you just don’t really see an oomph here. You don’t really see anyone truly challenging themselves. I mean, Fanning plays her usual teenager who seems disenchanted and a little flirtatious. Kidman remains this stoic figure whose poise isn’t broken even as she begins to speak aggressively, and Laurence remains big-eyed, adorable, yet expressive enough to understand why she is one of the top young talents today.

However, despite the combination of such great veteran and young actresses, alongside Colin Farrell who is no one to sniff at, the film is barely more interesting than 80% of most period dramas. 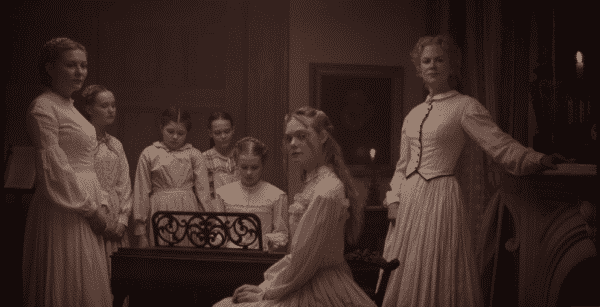 While there is the temptation to mark this as negative, it is only because I expect more. Arguably, Big Little Lies helped remind us that Nicole Kidman is still in her glory days and hasn’t begun the descent into mediocrity. Laurence and Fanning still remains indie darlings who surely with age will become those we see during BAFTA and Oscar ceremonies. Yet, The Beguiled doesn’t call upon their talents as their past roles have done.

To put it succinctly, this film seems to almost be a collective acting reel. A taste of what makes each of the actresses whose filmographies have become quite noteworthy. But if you aren’t a fan of them, then what you are left with a generic indie movie which chooses 1864 Virginia vs. the usual New York or LA locale.

Hence the mixed label for entertainment wise, The Beguiled is a complete bore. Which I say even with Corporal John wailing in pain and swinging a gun around. Then, performance wise, it seems that despite Sofia Coppola working with a few of the actresses before, and seemingly specializing in directing films focused on the experience of being a white woman, there wasn’t enough trust there to push them to be better. To do more than rely on their standard go to tools and look beyond as they took on this new role.

Thus leaving you with a film barely worth your time, unless you are a fan of those involved.