Wherever I Look
Recaps, Reviews, and So Much More
Home Movies Okja – Summary/ Review (with Spoilers)
Movies This is an image of one of the super pigs in Okja who has deformities.

Okja, at its heart, is more so about the food industry and animal rights than about a child and her dear pet.

Table of Contents show
1 Summary
2 Highlights
2.1 The Mija/Okja Connection
2.2 The Reality of the Food Production Industry
2.3 It Doesn’t Seem Like A Movie Made for Home Viewing
3 Criticism
3.1 Basically, This Movie Could Have Been an Hour Shorter If Mija’s Grandpa Talked To The Right Person
3.2 Dr. Johnny Wilcox
3.3 The A.L.F.
4 On The Fence
4.1 Is This Supposed To Be Political?
5 Overall: Mixed (Divisive)

Since she was 4 years old, Mija (Seo-Hyun Ahn) has raised Okja alongside her grandfather (Byun Heebong). However, Okja was not hers to have. The Mirando corporation simply loans her, one of 26, to farmers across the world to better their image. But, in the long run, it is all about business. Of which, the Mirando corporation is about GM animal products and Okja, alongside all other of their animals, are simply food.

However, when it is decided it is time for Okja to go, Mija travels across the world to save her. Which, with some help from Jay (Paul Dano) and the members of his A.L.F (Animal Liberation Front). team, leads to a happy ending. Well, at least for Okja. As for the rest of the super pigs? Off to slaughter they go. As should be expected, and hoped for, the Mija/Okja connection is strong enough to drive the film. I won’t say it is on the level of the connections we saw in A Dog’s Purpose, but it is strong enough to get an emotional reaction out of you. Especially when Mija seems so close to getting Okja back, much less when she achieves her goal.

The Reality of the Food Production Industry

At the end of the day, it becomes clear that none of this was personal. Nancy Mirando (Tilda Swinton), isn’t some Cruella DeVil type villain [note]Tilda Swinton would make the perfect Cruella wouldn’t she?[/note]. She isn’t trying to make some child cry or be cruel for the sake of it. She is running a business which makes money off of food production. Of which, she a genetically modified pig, made to a huge size, will be able to produce her company a lot of money.

Which, of course, means she will be making and killing a lot of pigs, including Okja. Now, why I find this important is because this is a reality. Animals die everyday and based off the few documentaries I’ve seen about how our food gets to market, it seemed the Mirando Corp., does nothing different from Tyson, Perdue, and etc. Animals are kept in tight spaces, brought to slaughter with a pop to the skull, and then skinned, cut into pieces, and packaged. 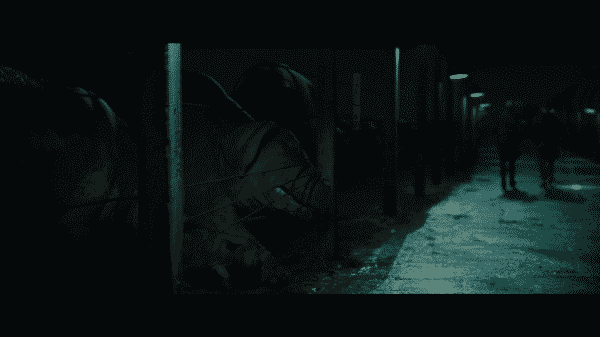 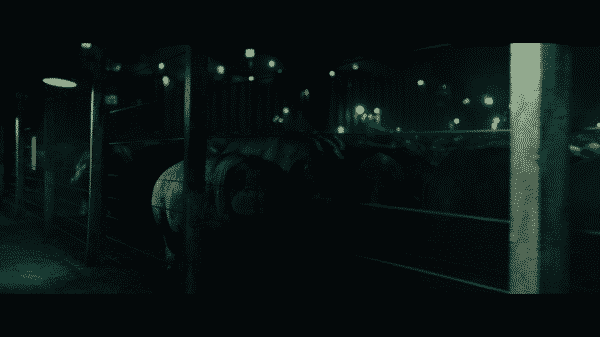 Making the film low-key seem like a PETA sponsored film at times, but what’s a blockbuster without a political statement?

It Doesn’t Seem Like A Movie Made for Home Viewing

I’m watching this on a 24-inch monitor and was originally listening to it with the built-in speakers. Something about that seemed off. So while I can’t get a bigger screen, I put my headphones on and it made things slightly better. For there is just something about this film that doesn’t seem like it was meant to be experienced on an average sized screen. You need something giant, perhaps 4K, or just a true movie going experience to enjoy this.

Which I’m not saying for the usual reasons I’m not fond of watching movies at home. I didn’t have the occasional need to do something else and then found myself disconnected when I returned. Outside of taking snapshots for the review, I watched this straight through. However, I felt I was really cheating myself with a 5-6-year-old monitor which certainly can’t bring the vibrancy I felt was captured when this was filmed.

Basically, This Movie Could Have Been an Hour Shorter If Mija’s Grandpa Talked To The Right Person Byun Heebong as Grandpa in Okja.

I was so mad when the resolution of the film came about. Mija’s grandpa lied to her about sending money to the Mirando corporation for years to buy Okja. He instead bought a golden pig for good luck. Which, at the end of the film, Nancy Mirando said was good enough of a deal for Mija to buy Okja and get a ticket home. Which, after investing two hours of my time, felt like such a slap in the face. You’re telling me that all that drama and nonsense could have ended if grandpa not only didn’t lie but talked to the right person?

This is assuming he even took the opportunity to ask to buy Okja. For what it seemed, grandpa was getting tired of his granddaughter running around with a pig. He seemingly wanted her to grow up, meet a boy from town, and get onto the path of making a family. Mind you, she is 14 when he implies this.

While I won’t call myself a fan of Jake Gyllenhaal, I won’t say I hate him either. However, his character in this film I wanted to be killed off the way they were killing the super pigs. Not for what he did to Okja, but just because how annoying he was. For while Lucy, Nancy’s twin sister, and the main rep of the Mirando corporation we see, is a bit weird, Dr. Johnny takes it to the next level. He is “I host a kid show and secretly am a pedophile” type of weird. Paul Dano as Jay, the most visible leader of A.L.F.

At best, the A.L.F. help make sense of how this 14-year-old Korean girl can face off against a multinational company. However, when you take note their people seem to all be in their 20s, you take the weight of believing Mija is capable of all this and set it on them. This multi-generational company, with their own security outfit, loses a 10 year in the making product to a handful of Millennials?

Not to put down the generation I’ve been assigned but, there is a need to either believe Mirando is more incompetent than we take them for or A.L.F. is more extensive than shown. Which is hard to imagine since they had one Korean translator amongst a whole bunch of white kids. Much less, with Jay seemingly being the head and going everywhere for every mission, this leads to more scrutiny.

Is This Supposed To Be Political?

This movie maybe about a young girl trying to rescues her pet pig, but there are other things involved. We have corporations lying to consumers because they can get away with it. The question of GM animals becoming a part of the world’s diet and then, of course, animal rights. Never mind the whole, how animals are kept and treated before slaughter.

However, I feel the need to question if this movie should be considered political or if it was just setting the tone? You know, presenting what the threat is to Okja’s life. Because it doesn’t present a call to action but isn’t passive about establishing how the food industry is.

Here is the thing with Netflix movies, most of them seem like they were made to go straight to a VOD service. There isn’t much grandeur about their visuals and there is no real need for high sound qualities. However, Okja feels like an exception. It is made to be seen in theaters and to watch it on a regular old monitor feels like you are cheating yourself.

But what really led to this Mixed label was because, while Okja is touching, it seemed like another film which Netflix just threw money at. Similar to the way they treat Adam Sandler, or arguably what Bryan Fuller was allowed to do with American Gods, it is like these auteurs were given the money they needed and left alone. Which, I’m sure, many a fan thinks is a good idea. However, there is a reason a network or production company gives notes and has to give approvals. For if the auteur isn’t questioned or challenged, then you get a vision with shoddy execution.

In the case of Okja, while a beautiful film with a touching friendship, what threatens and complicates it seems almost like a mess. For whether we are talking about the state of the modern food industry, ranging from the use of GM animals to treatment, or animal rights, it is like Mija/Okja’s relationship was a Trojan horse. One which brings us into this barely thought out, and very weak, political statement. Which I’m not saying I don’t get, for just watching one PETA video can be a bit eye opening, but if you are going to make a statement, don’t half ass it. Much less sell people on one thing and then deliver something else.[note]I’m not going to pretend as if the plot shown wasn’t a possibility, but it is just the execution which bugs me.[/note]

Good review – but your criticism about “ending it sooner if her grandpa spoke to the right person” is purely incorrect.

It was Nancy who sold the pig to Mija, but it was Lucy who insisted on the competition, as all part fo the publicity stunt, and Okja WAS the winner.

There was no way Lucy would have let Okja go, or at least before the massive PR stunt that was getting Okja on stage and branded as the winner.

It wasn’t until, at the END of the film, that Nancy comes in and takes back over, and doesn’t care about the publicity. It’s at that point that Okja is just like all the other super pigs in the slaughterhouse. It’s that reason Nancy didn’t let her go, until Mija made a reasonable bid for it.

No amount of money would have made Lucy give up Okja. So the “Evil” twin coming in to play is really the reason why Mija got Okja back.

Seems like you might have completely missed the last scene after the credits? Sure it isn’t perfect, but I think that this really helped to bring it all back on track.