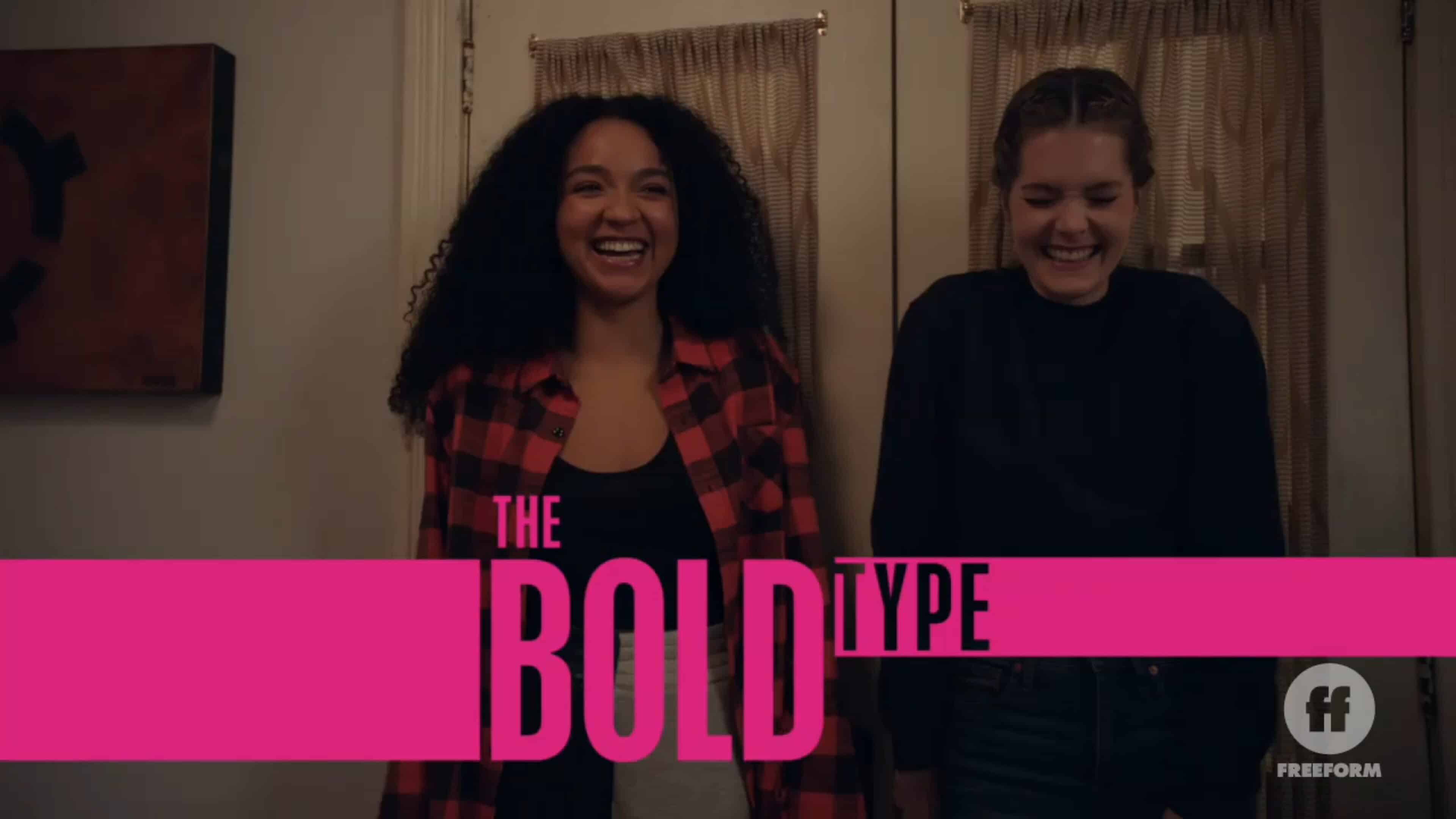 Season 5 of The Bold Type continues to course correct at Adena returns, and more staff shakeups happen at Scarlett.

It’s A Divorce, Not A Funeral – Sutton

With Sutton going Instagram official with her pending divorce, sympathy scatters throughout Scarlett, and she doesn’t like it. Richard didn’t die, he just doesn’t want to be with Sutton anymore romantically. So people skirting around the topic of relationships and marriage, it doesn’t sit right with her. Especially because she is feeling left out and made to feel less than. So, she makes sure to clear the air and let everyone know she is okay so everyone can move on, just like she would like to.

At Scarlett, it isn’t just employees but managers who get reviewed, and while Jane seems to get good marks from Scott, Addison? Well, she feels as neglected as she appears to viewers. She gives Jane a three out of five for what she wants is what Jane has from Jacqueline, and she isn’t getting it. In fact, she has already secured a possible new job which leads Jane to want one more chance.

But, in an effort to appease Addison, she overcompensates and starts to ignore Scott, who realizes two things: For Jane to rectify things with Addison, he needs to leave, and also, as much as there is a mutual interest, this isn’t the right time. So, off Scott goes, and Addison stays, for now.

However, while Jane is dealing with issues in adjusting to being a manager, Jacqueline is dealing with Andrew, who seems not himself. He is coming in late, isn’t doing tasks as quickly as he used to, and the reason is that he just lost a roommate, so he had to get a second job because he is underpaid. This is a shock to Jacqueline, and shows, while a good mentor and encouraging, when it comes to money? She is more so focused on bringing it in than how Scarlett dishes it out. But with Andrew bringing this up, she says she’ll handle it.

ADENA IS BACK! Not in the capacity she was, but beggars can’t be choosy. Plus, with this shift due to her having a stable job and, unlike Kat, no longer gung-ho on activism, things have changed. Why? Well, for one, she has stability now, so she isn’t trying to mess up her visa or job, but then there is Shamsi, her mom.

Shamsi notably was a student during the Iranian revolution, and since she believes that didn’t change anything, she doesn’t find much value in causing a commotion. So, with her either visiting or living with Adena, she gets hit with this regularly, which has made Adena unlike her usual self. However, with Adena being brought in for Kat’s latest project, she is reminded how much she admired Kat and her form of activism. Granted, she also sees that Kat’s radical thinking also makes it so she burns many bridges, but with them not currently dating, that isn’t really Adena’s issue. She can just be there and enjoy the ride without having to worry too much about the fallout.

While The Bold Type is often pushed to be seen as revolutionary, one of the big-time factors to us was the presence of Adena. Both when the show premiered, and now, the representation of Muslim women is limited, and add in Adena being lesbian too? The number becomes even more limited. Add in she wears a hijab, and is an immigrant, then and now, Adena brought something far different than any other character on this show has had to offer.

So her return is a beautiful thing, and considering the alternatives we’ve seen for Kat? One of the best examples of season 5’s course correction.

Scott followed the long line of romances we’ve seen from Jane, which didn’t bring much beyond eye candy. So here is hoping, with the show wanting to leave the impression she could become similar to Jacqueline, it neverminds Jane and potential romances and focuses on her becoming a mentor. One who could craft the next Jane, minus her many flaws.

The Struggles To Be A Manager

With that said, let’s give some credit to Jane, for managing employees is not an easy task. Especially since it isn’t like Jane is like Jacqueline where she isn’t obligated to write anything – The Failining Feminist is literally about Jane’s life and point of view, and she has to oversee two full-time employees and who knows how many freelancers to coordinate their work into something cohesive. Which, because of Jacqueline’s investment, means a whole lot of pressure on Jane to deliver.

So when you factor in her having to do her work and juggle personalities and other people’s feelings? You’re reminded that perhaps the biggest challenge of the managerial process isn’t often the work but the people. And for Jane, who has relished in Jacqueline’s favoritism, it seems she has come to realize, while you can have your favorite, that doesn’t mean you can abandon everyone else. Hence, Jacqueline still checked in on Alex, Sage, and everyone else while doting a notable amount of time to Jane.

The Fear Of Speaking Up And Seeming Ungrateful

Yet, let’s not play down that part of the reason Jane got so much time, and attention is because she asked for it. Alex and Sage, who just got a vertical, weren’t in and out of Jacqueline’s office, and we mainly saw them when it was time to pitch articles. Most of which, regarding Sage, became very one-note. With Jane, however, she pushed for more, pitched ideas that showed she could handle more diverse and in-depth assignments, and even be vulnerable and expose herself in her work.

But, while Jane has shown the value of advocacy, Andrew gives us Sutton vibes. You know, the type of character who doesn’t seem to always be at the right place, at the right time, and gets given the amount of grace you’d be hard to find with an employer? In fact, besides being a male and gay, isn’t Andrew’s storyline akin to Sutton’s from season 1? A character who could potentially be doing so much more, and does perhaps beyond expectations, yet is grossly underpaid?

This, to us, seemed like a surprise since Andrew is the assistant to the head of the magazine. So you’d think, of all people, he is paid well? Though, lest we forget, they are in New York City, so what is paid well in other parts of the country will barely get you a mice-infested studio in one of the boroughs.

Getting back to the point, though, what we used to value in Sutton, and Andrew reminded us of, is the presentation of what it is like to be a millennial. The idea of letting your boss know you are underpaid? As bold as they think this generation is, there are far fewer Kat Edison types than you may think.

Most of us don’t advocate for ourselves for things like benefits, better pay, or conditions. We’d rather find a new job on the sly, like Addison was than figure out ways to make where we work better. Because, frankly, we’re under the impression employers have no loyalty to us or give a s***. Hence, despite Jacqueline handling the budget, it seemingly never crossed her mind what Andrew gets paid or any of the assistants. And yes, you can submit that, once Jacqueline knew, she said she’d do something, but let’s not pretend Jacqueline is an exception and far from the rule.

Pushing Divorce To Not Be A Failure

As we dismantle the patriarchy, outdated traditions, and prejudice, there has been the issue of divorce and how to see it. Breakups, in general, are awkward, but divorce? That is a commitment done before friends, family, and with the government involved. So that ending can easily feel like a failure, for it is a major event in someone’s life.

However, it happens. For Sutton, admittedly, if she just had certain conversations with Richard, they’d probably never get married but, that’s life. Now Sutton knows to make it clear she doesn’t want kids, and the guy has to be in alignment with that. So this is more so a very expensive lesson than a failure. The Bold Type: Season 5/ Episode 3 – Recap/ Review (with Spoilers)
Trajectory: Plateau
As a fan favorite returns and Jane is redirected to focus on her job than a boy, things are looking up for The Bold Type. Granted, Andrew’s recent conversation with Jacqueline reminds us of how Sutton has less her everyday person shtick, but maybe through divorce, she too can be an evolved form of who we once knew?
Highlights
Pushing Divorce To Not Be A Failure
The Fear Of Speaking Up And Seeming Ungrateful
The Struggles To Be A Manager
Goodbye Scott, Hello Addison?
ADENA IS BACK!
Low Points/ On The Fence
84
Follow Wherever I Look on Twitter and Instagram, Like us on Facebook, and Subscribe to the YouTube Channel.