While this might be the final season, it seems The Bold Type doesn’t believe that means more of the same and no more new beginnings.

While her podcast is still popping, it doesn’t necessarily compare to her former work at Scarlett, where she exposed people to new ideas, society’s prejudice, and things of that nature. So when she encounters a friend from her past, Zuri, who is trying to get a job at The Belle, but can’t due to a felony charge on her record, Kat decides to do something about it.

Note: She does not confront her boss about the company’s hiring policies since it seems she has learned it is better to buck the system but not always your employer. Instead, she uses her social media following to highlight Zuri’s plight and try to get her a job – which doesn’t work.

However, Kat’s actions do give Alex an idea on how to help Joey since apparently, that is Alex’s problem to fix. So to help Joey get his job back, Alex uses his podcast and platform to give Joey a path to redemption and pushes his viewers to remind themselves of bad tweets they sent out. Thus causing a viral moment and Pinstripe not just rehiring Joey but also taking note of Alex.

Because Jane was more worried about her crush than work, she has now put Jacqueline in an awkward situation, right before Scarlett’s ad presentations. For between a retraction of the article and Page Six reporting on Jacqueline and Nicole’s shared relationship with Ian, things aren’t looking good. However, Ian supports Jacqueline, and with Jane owning up to what she did, Jacqueline decides to not let this one down.

Rather, Jacqueline decides to directly speak to Nicole about the situation, and while Nicole is defensive about the idea she isn’t approachable and didn’t do a proper investigation, in the long run, Jane and Jacqueline end up absolved. Mark ends up suspended, and all seems well at Scarlett in time for the ad presentations.

But then Alex reveals he has an offer from Pinstripe, which doesn’t just include money, but his own team and opportunities to shape stories – which Scarlett hasn’t necessarily given him. Though, with being forced to recognize Alex’s value beyond a male voice at a female-centric publication, all Jacqueline offers is to match and surpass Pinstripe, with no specific terms.

The End To Some Things And Beginning Of Others – Alex, Sutton, Jane, Kat

While Alex appreciates the counteroffer and opportunity to grow that Scarlett has given, ultimately, he decides to leave. With this, there are a lot of sad faces, but he keeps reminding them he is only a few floors away. Plus, for some, like Kat, they see him more now than when they worked together.

As for Sutton and Jane? Aside from Alex leaving, Jane goes into the ad presentation not knowing yet what Nicole discovered and processed, and after acknowledging her mistake, she moves forward with her presentation. But then there is Sutton.

At first, Sutton was struggling because Richard was coming to New York, she didn’t know what that meant, and that consumed her to the point her sizzle reel was an afterthought. But after having her friends take her phone away, she got it together and then got back to obsessing over Richard’s next move. Which is revealed to be asking for a divorce. Mind you, not him talking to Sutton and saying that to her directly, but sending one of his friends for he couldn’t bring himself to do it.

But for those mourning the official end of Richard and Sutton, at least Kat is talking about hooking up with Adena to her Zuri.

Adena’s Return In The Future

With damn near every relationship we were introduced to in season one over or destroyed, Kat and Adena remain our last hope. And all things considered, while Adena hasn’t been perfect, she also remains the only one who was someone’s love interest that didn’t get demonized, and their character desecrated. Pinstripe cheated on Jane, just as they were becoming a literary power couple. Richard left Sutton, albeit because she didn’t want to have kids, a major topic that should have been discussed before nuptials, and while Ian is on the mends, let’s not pretend his lack of communication, years ago, caused all the issues Jacqueline had to deal with. Well, granted, Jane being distracted didn’t help, but the point remains.

Which is all to say, of the original couples, Adena is the only one left who hasn’t had a major faux pas, outside of having issues with bi people, and could give the same butterflies as when they first were introduced as a lead’s love interest.

Kat Reminding Us How To Be A Good Social Justice Warrior

What Kat consistently reminds you is, to be a social justice warrior means more than posting a tweet, reblogging, or what have you. To truly help, you have to get involved and show up for the people who need change and make it about them. Not only that, but you are going to have to deal with the fact change requires a movement in society, not just a single action.

With Kat helping Zuri, she talked to her about what her story was, used her following to create an awareness, and when that wasn’t getting results, she investigated other ways to change things, which will including courting Adena to help.

Jane Not Letting Jacqueline Take The Fall For Her

We’ll always be hard on Jane since Jane is annoying more often than not, but we will give kudos for her owning up to her mistake and not letting Jacqueline give her the easy way out. Granted, as usual, Jane doesn’t really suffer any true consequences, but she is the future of Scarlett. So to expect her career to be damn near killed off like Kat’s was, that would unfathomable.

Alex being guilted into getting Joey’s his job back and being used as a counter-response to cancel culture was such BS. Especially considering what Joey said to him. It felt very on par with Kat being used to uplift Ava and show not all conservatives are the same. Here is hoping The Bold Type stops using its Black characters to present redemption arcs for white people for the rest of the season.

Let’s be real, Alex wasn’t really valued at Scarlett. Was he part of the “family?” sure. However, anyone who works someplace that uses the term “Family” to describe co-workers knows, it means a lot of people are taken advantage of. Now, this isn’t to say Alex was underpaid, but I think his role as the male perspective was almost a token, for Scarlett is a women’s magazine at the end of the day. One that, sure, he could have long had a vertical in, but it isn’t like Jacqueline was trying to mentor Alex like she was Jane.

Heck, if I recall right, there was barely a budget when his podcast started. Yet, despite sort of being left out there, stuck in a role similar to Sage, good on him for leaving and not burning bridges on the way out. 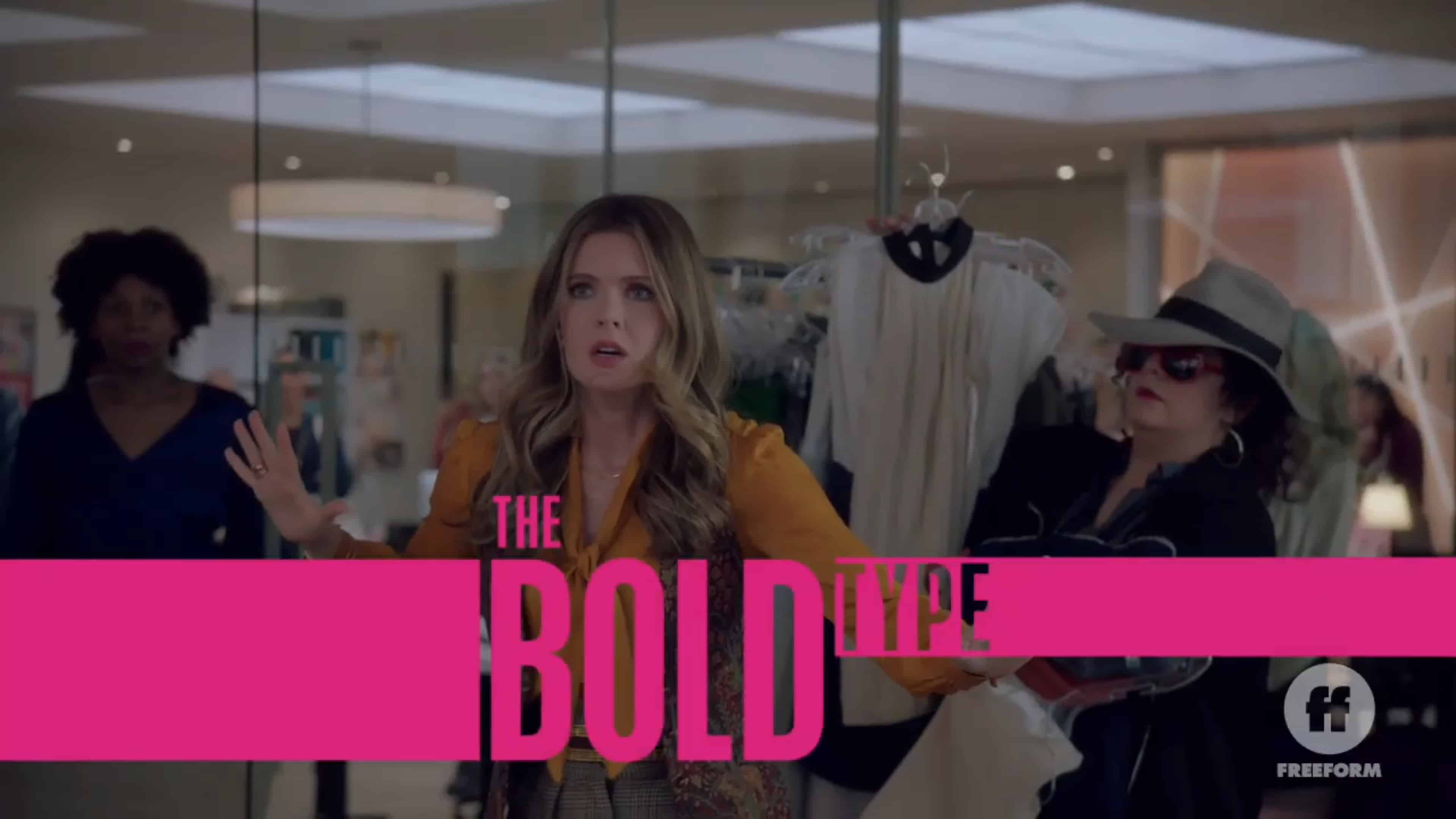 The Bold Type: Season 5/ Episode 2 – Recap/ Review (with Spoilers)
Trajectory: Plateau
The Bold Type still seems to be torn between exploring ways to present social commentary while doing characters justice and struggling despite 5 seasons to get it right.
Highlights
Adena's Return In The Future
Kat Reminding Us How To Be A Good Social Justice Warrior
Jane Not Letting Jacqueline Take The Fall For Her
Low Points/ On The Fence
Alex Getting Used To Recover Joey's Reputation Feels Adjacent To Kat Being Used To Show A Different Side To Ava
Jacqueline Not Expressing How She Values Alex Till He Gets Another Offer
80
Follow Wherever I Look on Twitter and Instagram, Like us on Facebook, and Subscribe to the YouTube Channel.