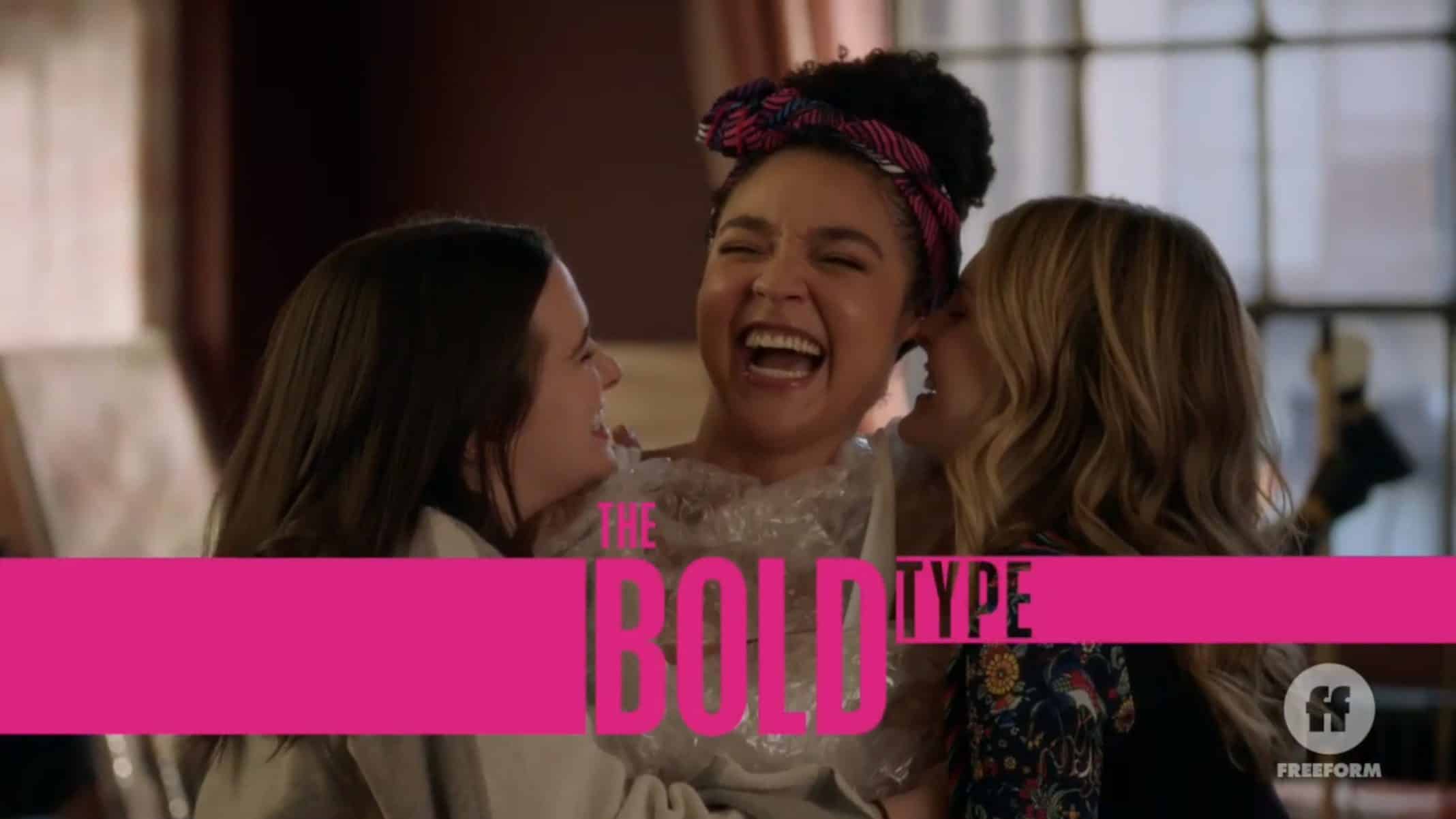 Trauma is often noted as a big, usually physical thing. However, long after the wound heals, it is mostly mental and emotional, as seen in the latest episode of “The Bold Type.”

Officially, Kat is moving out, and it is a struggle to let go of her things. In fact, the cost to store her items is $300 a month. Which, on a bartender’s salary, as you can imagine, it isn’t enough. But, with Kat ready to hustle to bring Belle her social media expertise, she might find a job better than the one she has.

However, it seems, while the Belle is interested in a potential podcast and interview series, highlighting members, they aren’t going to front the cost. Thus, Kat has to buy her own things, and with that said, Alex joins her since “Ask Alex” has led him to be the aficionado of mics of the group.

But, as always, while Alex is usually just used randomly, we’re also reminded of why each woman of “The Bold Type” maintains their friendship with him. He is someone who does well in that space, which makes him like a brother – Someone who you can have intimate moments with, without it getting awkward. 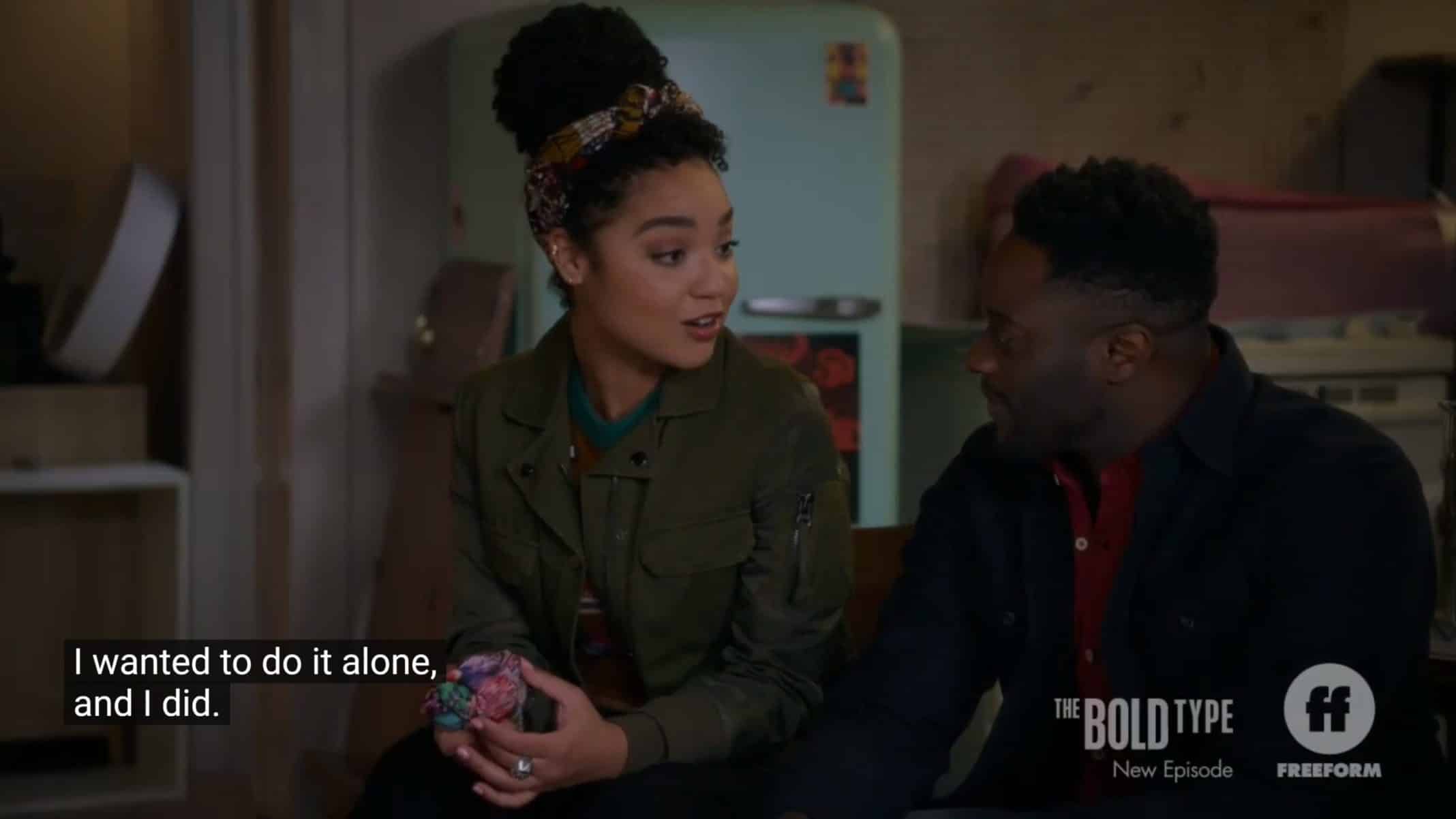 Case in point, Kat is forced to realize she has to sell her things, and while she often is there for Jane and Sutton, as shown by Sutton popping bubble wrap while she is having a moment, those two play too much. Also, sometimes you don’t want the silliness and hugs – you just wanna talk. And while Alex has his imperfect moments, he still knows how to ask the right questions, give people space, and support in ways that either are just an Alex thing, a guy thing, or for Kat, a reminder of why the Black delegation was one of her favorite parts of Scarlett.

Another example of why the love and support sometimes isn’t enough, or not apt for everything, is that nothing can compare with people who have been through your experience. For Jane, as fun as it is to go on dates and deal with the teasing her friends give her over her relationship with Scott, they don’t get the side effects of a double mastectomy. Never mind a double mastectomy paired with someone cheating on you at a very pivotal moment in your life.

Mind you, this isn’t to downplay Adena and Kat’s back and forth, or the time Sutton and Richard were on a break, and Richard seeing someone else. However, getting pieces of you cut out, your body reconstructed, and not for vanity but medical purposes? That’s an entirely different thing. So, Jane starts a support group at the Belle to help her try to feel a bit more normal and to move past the feelings inhibiting her in her head.

To rip the Band-Aid off, Sutton has a miscarriage. However, she has mixed feelings about it. On the one hand, Sutton is happy that she doesn’t have to possibly pause her career for the sake of a little person who is reliant on her. Yet, on the other hand, the realization she is happy about it Sutton recognizes sounds strange.

But, as previews for the next episode show, what is going to make this even more difficult is Richard. With their age difference, he is ready and established enough for a child. Sutton, on the other hand, has really just hit her stride. So to slow down, or even stop, due to a baby? That’s hard to process.

Especially since it isn’t like this first taste of the experience was smooth. Imagine morning sickness, then being forced onto bed rest, and even if you use FMLA, which would hold your job position, someone could still earn the work you’ve been setting up. They could benefit to the point of becoming the new you. And then, taking note you’ve been gone for possibly months, with your chemistry changed and personal life utterly altered, you have to not only rediscover who you are as an individual but also at work.

Sutton’s Complicated Feelings About Her Miscarriage

One of the crucial things to note is that miscarriage does happen to people in their 20s. I think, too often, it is something pushed as an idea of something that happens to women in later stages of life when that isn’t true. Also, you have to appreciate Sutton didn’t have the assumed feelings of devastation. She was excited, but as she realized the potential sacrifices around the corner, that excitement lessened. Mind you, this is with a partner like Richard.

So with the miscarriage, it makes you wonder if she’ll see that as a reprieve, and a stark warning to keep on her birth control regularly? Never mind, taking note Jacqueline and Ian’s relationship, will it lead us to see her talk to Richard and show another example of how communication keeps a marriage alive, or how silence slowly can create distance?

The Shift In Kat’s Life

Kat has long been the pseudo-rich friend in the group. Likely, her rent was nowhere near Jane’s, and that’s even with her former management salary. Also, taking note of the stuff she had, clearly, everything wasn’t from Ikea. So this humbling of Kat, seeing her have to build herself from the ground up, it is a treat in a way.

Take a look at it this way, Kat’s job at Scarlet was given to her fresh out of college, by her father. Now, Kat’s job at the Belle did come from Jane’s network, but it isn’t like being a bartender is a fast track to anywhere, in anyone’s book. So, Kat has to hustle her knowledge and grow from there. This means we get to see her come up the same way we have done for Sutton and to a point Jane.

Understanding You Sometimes Need People Outside Your Friend Group

Between Alex being the group’s male friend, to Sutton having Richard, and Jane finding a support group, we’re reminded you can’t get everything you need from one or two people. Which is healthy and important since sometimes shows romanticize the idea of having close friends and paint the picture that the insolated group can provide the majority of your needs. But, as “The Bold Type” shows, while the support is beautiful, they can’t always provide you what is needed to move forward.

Kat, while she loves her friends, Kat experiences the world as a Black woman, and while that isn’t playing a role in her current circumstances, it does make her life different. So Alex, the only Black friend she has that is in consistent contact, gives her a sense of belonging in our mind. Plus, as independent as all the ladies are, between Alex and Richard, you see this willingness to be vulnerable with a man and not be submissive but accept they need help.

Not to say help from a man, specifically, but you do get to understand the dynamic expected is why Alex is kept around and Richard beloved. With Alex, he isn’t going to go to one of the other girls and say what’s going on with Jane, Kat, or Sutton. He, like Richard, will ask questions, listen, and if they feel they can do something, they offer to. But, a good portion of the time, what they provide is a stern presence. Which we’ve seen the ladies need for when they just want someone to lean on without having a deeply emotional conversation.

With that said, I remain so unsure of what can be done with Alex. His storylines have been a bit all over the place without much in the way of consistency. There was a moment he dated Sutton, but that didn’t work out. He had a #MeToo moment, but that got dropped. Angie came and went, and while he was Jane’s roommate, they bonded, but it seems like there have just been means of keeping him around to be called on at will, but him having his own life? It’s sporadic.

Heck, even with him dating the doctor, there is this constant need to remember he isn’t one of “The Bold Type.” Alex is not a main character, yet his presence sometimes makes him come off like someone who should be at the level of Oliver or Jacqueline. At least, at this point.

I don’t recall the last time each member of “The Bold Type” were all struggling at the same time with issues that weren’t over in an episode. So, as there is the pursuit of something long term, here is hoping we see these arcs really explore Jane’s struggle with a new normal, Kat having to rebuild herself and as for Sutton? Well, create a marriage that works for her and isn’t primarily about what Richard may want or make him happy. Since it still seems the dynamics of their relationship has kinks to work out.

Understanding You Sometimes Need People Outside Your Friend Group - 84%

Sutton's Complicated Feelings About Her Miscarriage - 87%

I don't recall the last time each member of "The Bold Type" were all struggling at the same time with issues that weren't over in an episode. So, as there is the pursuit of something long term, here is hoping we see these arcs really explore Jane's struggle with a new normal, Kat having to rebuild herself and as for Sutton? Well, create a marriage that works for her and isn't primarily about what Richard may want or make him happy. Since it still seems the dynamics of their relationship has kinks to work out.