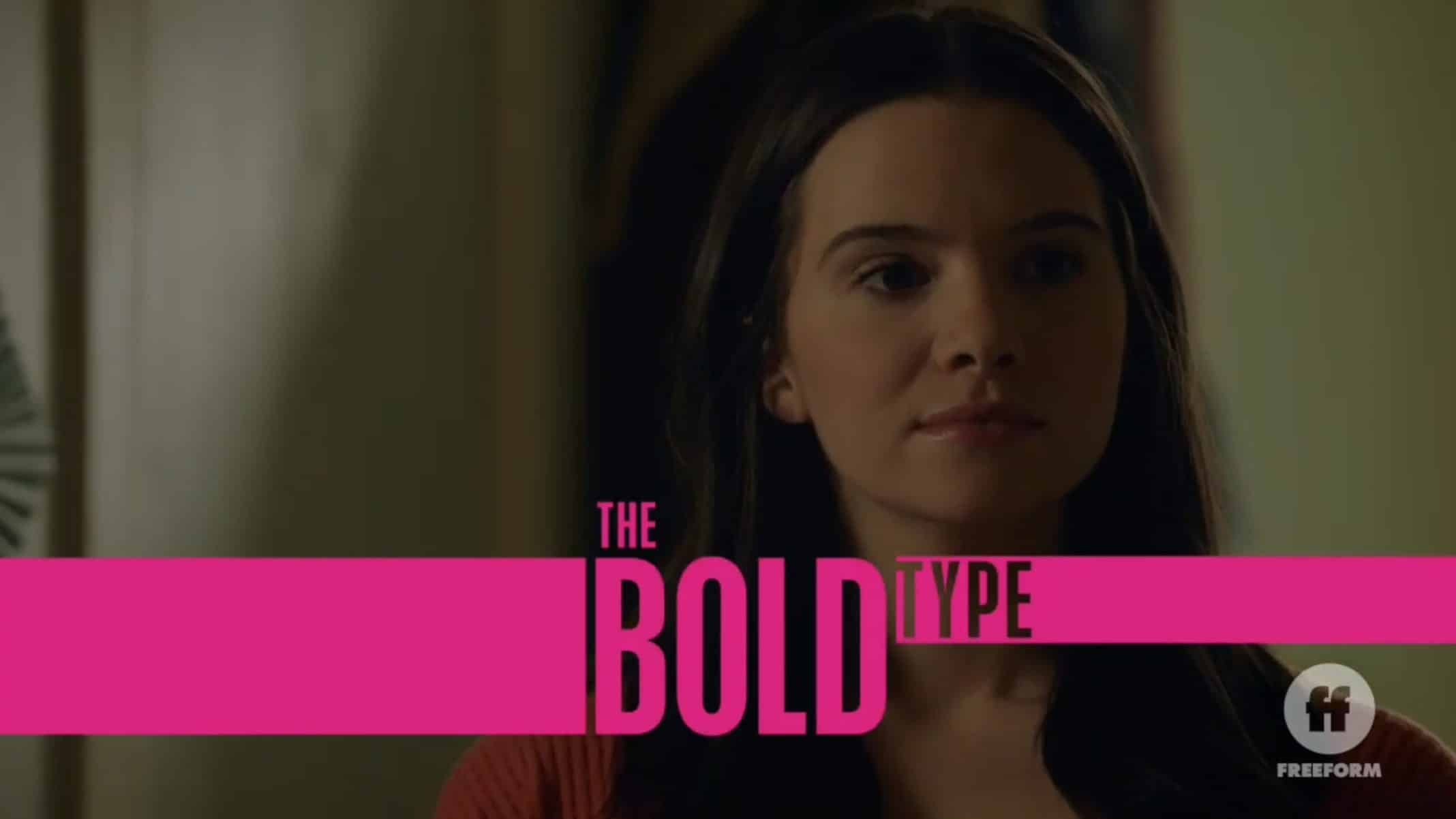 Three months have passed and, as always with “The Bold Type,” it’s not about change as much as it is about growth.

With Kat’s parents being able to afford to let her not pay rent for three months, she has taken advantage of that. Kat has gone to protests, not really look for a job, and have a few trysts, maybe even make a new girlfriend? But, the fun times come to an end as they threaten to cut her off. However, with rejecting a job offer, despite the perks, including equity, due to them limiting her activism, it seems Kat rather give up her place, maybe even move in with Jane, than ever set aside her morals.

Trying To Have It All & Do It All – Sutton

Now that Sutton is married, has her dream job, and the type of pull that leads some, like Olivia (Ali Stroker), to trip over themselves when it comes to her, it seems what Kat and Jane had, since season 1, Sutton finally has gotten. But, being that this power and influence is new, Sutton isn’t necessarily ready to test it yet.

Case in point, for Scarlett’s next issue, there is supposed to be a photoshoot with a child star, Mara (Myra Molloy), who is on the brink of having a Zendaya in “Euphoria” moment. However, with a reputation of stealing, Sutton keeps her eye on her and switches out the look she was going to do since Olivia didn’t want to risk it.

But, with Sutton learning the girl, Mara, was dealing with a momager who stole from her and she stole due to wanting to pass on that pain, she was given a break. In fact, we’d say Sutton pulled a Kat, when Kat was employed, and used the weight of Scarlett, paired with the network she created over the years, to convince Olivia to loan the clothes. Leading to the moment Mara wanted and Sutton surely gaining another fan.

One who sees her throw up into a plant and who is likely pregnant.

An Out Of Body Experience – Jane

Between a double mastectomy and implants, Jane isn’t necessarily all that comfortable with her body. Though what makes things even more challenging for her is, upon her return, Jacqueline lets her know her vertical needs to be up in a week, and Jane needs staff. This, as you can imagine, is a lot to deal with.

For one, Jane’s breasts have made her self-conscious, and when you add things don’t fit the same, it makes it worse. Add in the two people she interview, it seems they aren’t all the way interested, at least how Jane would like, and she struggles. After all, Jane was like a puppy whose owner came home when it came to working for Scarlett, so not getting that same energy hurts.

Luckily, however, between being accepted to a prestigious, all women, club named The Belle, alongside one of the interviewees, Addison (Christine Nguyen), coming on board, Jane does make a few wins. The kind that, even with us being very critical of Jane, we can see didn’t come with ease.

One of the things which makes Kat a complicated character is, considering Jane grew up in a single-parent household, the youngest of four, there were likely some struggles there – beyond her mom dying. Sutton, she grew up in a single-parent household too, but her mom had financial issues. Hence Sutton more focused on survival than thriving in early seasons.

Kat, on the other hand, she went from assistant to head of social media within 2 or so years. That leap was quicker than Jane’s to her position and damn sure quicker than Sutton’s to her current role. However, because Kat always picked a fight, her privilege didn’t scream out as Jane’s often did.

But, stripped of her job, and with you taking note her parents let her not pay rent for possible three months? Mind you, we’re talking about living in New York City, without a roommate, with all that space. It really forces you to wonder, with Kat’s mindset being she needs to work somewhere that lets her speak out, what’s next for her?

Take note, she could work for a progressive politician, lord knows many could use social media expertise. An example being that person who was going to run for office, before Kat stole her thunder. There is someone she can work for, right? Even though, as much as Kat wants to be altruistic, it seems she still wants a nice paycheck to go along with that. Which, as she noted about non-profits, aren’t always two things that come together.

Generally speaking, we have never really been a Jane fan. Between Kat’s fighting for the little guy, using her privilege to uplift people, and Sutton’s struggle to move up the ladder, Jane wasn’t necessarily in the middle. As Kat often pointed out, Jane had white privilege. She stumbled upon a doctor, and because he cared too much about her and her business, she dropped him. Jane left a job, got fired from another, and then got rehired from a job she quit only months before without much issue.

I don’t know about you, but between that, her awards, and so much more, Jane has been on the fast track since we met her. Which, for us, made her hard to like since it seemed like, not only were things handed to her, but she didn’t have to make too much of an effort to get far.

However, as much as we don’t want to make light of how a cancer scare changed her life and ended her mother’s, I feel that with Jane having a real struggle, that can’t be solved with a pep talk or her advocating for herself, there is something to cling to. A struggle that can be identified with and growth that doesn’t seem to be like a teenager’s growth spurt. So, while I don’t wish her no harm and hope this body dysmorphia (?) doesn’t plague her, I am glad Jane is going to face a real challenge.

It’s weird to see Sutton step into the role we’re so used to Kat playing. Not to say Sutton never advocated for people before, but using her job as leverage wasn’t a thing before. Yet, she is past the point of having to prove herself, so here come the spoils. Plus, it really does make you appreciate her whole journey seeing people like Olivia note how much they need to make Sutton, and Scarlett in extension, happy.

Alex Remains The Best Guy Friend You Can Have

Alex is really the bonus lead of the show. Yes, his storylines come and go and aren’t necessarily consistent. However, aren’t you glad he is still around? That after him awkwardly dating Sutton for two minutes, he didn’t leave Scarlett with his tail tucked between his legs?

Who Will Be Sacrificed For Jane’s Staff Members & The People Where Kat Lands?

We just got to really know background characters in the first half of this season, is that over now? Will the sex columnist and Jacqueline’s assistant (see how I forgot their names) now fade into the back as time is dedicated to showing Jane trying to walk in Jacqueline’s footsteps? Leading to Jane realizing she can’t duplicate Jacqueline’s methods for she has to find her own management style? Never mind getting to know these people and getting wrapped up in their lives.

The Note That Reclyn Has Republican Customers, So They Have To Keep Employees From Posting Political Messages

Can we just say, taking full note that the company was a start-up, it’s a friggin couch company. But, you do have to appreciate how much Kat’s storyline this episode shows you how fearful companies are becoming. For as much as being doxed sucks for the employee, it also puts a spotlight on the company.

I mean, look at Scarlett. Jane shamed them about their healthcare policy, so they had to clean that up. RJ’s connections to conversion therapy led to an immediate dismissal, and it really pushes you to question if there is a line anymore between who you are at work and your personal life. Which, considering how and why Kat got fired, I hope they pursue more since it is a subject which is going to be a challenge for Millennials and Gen Z who have much of their life documented online at the level of an autobiography.

The Note That Reclyn Has Republican Customers, So They Have To Keep Employees From Posting Political Messages - 76%

Who Will Be Sacrificed For Jane's Staff Members & The People Where Kat Lands? - 74%

Alex Remains The Best Guy Friend You Can Have - 81%